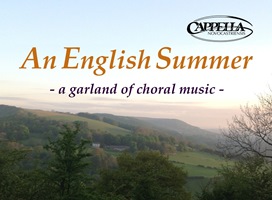 Capella Novocastriensis began their musical celebration of English summer with a lively performance of one of the oldest and, perhaps, the most optimistic, pieces of English music, the round ‘Summer is icumen in’. Part songs by Elgar and Finzi then made up most of the first half, the music scented heavily with flowers and dappled with sunlight. The choir blossomed in the first of five settings by Finzi of poems by Robert Bridges, I Praise the Tender Flower and I Have Loved Flowers that Fade floated like petals in the air, before a sudden change of gear and mood for My Spirit Sang All Day, which was fast, lively and full of joy. The dreamy mood returned for Clear and Gentle Stream, and Haste on, my joys! tripped along, ended, as many of the pieces on tonight’s programme did, with some impressively solid bass singing.

The choir gave an assured performance of Elgar’s There is Sweet Music – a tricky piece that has the men and women’s parts singing in different keys. The result is a strange, dream-like soundscape, reflecting the effects of the poppies and the overall sleepy mood of Tennyson’s poem. More spooky Elgar followed with My love dwelt in a Northern Land, a gorgeous pre-Raphaelite fairy-tale with words by Andrew Lang. The choir created the gothic atmosphere beautifully, particularly the lower voices, in their hushed chant-like passages in the third verse. Some of the sopranos were, however, a little too loud – one or two voices were a bit too prominent in this and in other quieter parts of the concert.

A third Elgar piece followed in the second half when the concert’s theme took a pessimist shift, with the flowers of summer becoming the flowers of death. Death on the Hills sets a translation of a Russian poem, depicting the Dance of Death in procession through the countryside. There was some particularly good singing in this rather gruesome song, with great emphasis and care taken over the words. The musical texture thickens into dense counterpoint as all the dead, old and young, crowd in, then dies away into a macabre chant that came across very effectively, ending in a long drawn-out and chilling thhhhh.

King James’s son, Prince Henry, was an immensely popular figure who died tragically young from typhoid, but he left an enduring gift to us in the outpouring of music that was written by and for his grief-stricken people. It was good to hear the settings of When David Heard by both Tomkins and Weelkes. The Tomkins, with its anguished outpouring of grief is the more well-known, but the Weelkes setting is also deeply passionate (and a favourite of mine). The flowers returned for Robert Pearsall’s Lay a Garland, another piece of Victorian Gothic, in which the choir clearly enjoyed bringing out the twisted, biting suspensions.

John Rutter rounded off the concert with a spoonful of sugar to return us to a suitably summery mood. This was conductor Simon Lee’s final concert with the choir – he’s off to America to spend two years on a choral conducting course at Yale – and I had the impression from his affectionate introduction that Rutter’s Five Childhood Lyrics was his own particular choice to end his time with Capella. These settings of children’s poems are quite early – written in 1973, but during the first of the set, Monday’s Child I was sorely tempted to play Rutter Bingo, as all the hallmarks of his popular Christmas music seemed to be firmly in place. I had to put aside my own prejudices though, because The Owl and the Pussycat was thoroughly enjoyable, and the choir were lithe and light, as they danced through it (and I loved the cheeky insertion of the Wedding March). The final piece of the set, Sing a Song of Sixpence was built around the traditional nursery-rhyme tune, and ended the concert as it had begun, with the choir singing a boisterous round.