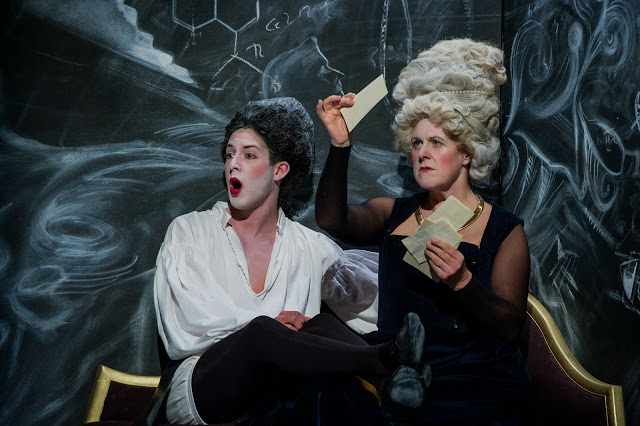 I’ve spent the last three evenings in the front row of the Gala Theatre in Durham, immersing myself in baroque Venice, thanks to English Touring Opera. They don’t usually bring their November shows to Durham, but I hope we’ve shown them that there is an audience here for opera beyond the Verdi/Puccini/Mozart classics and that they continue to bring their more adventurous autumn seasons to us.

Musically, the operas worked backwards in time, beginning with Handel’s Agrippina and peeling off the layers to get back to Monteverdi, whose Coronation of Poppea was first performed in 1643, although its narrative happens to continue after Agrippina left off. In Handel’s opera, first performed in 1709 the conventions of 18th century opera are recognisable – virtuosic arias alternate with the recitative that drives forward the action, whereas in Monteverdi’s opera, and Cavalli’s Jason that was sandwiched between them, the boundaries are more blurred, and as an audience we responded to this – it was only in the Handel that we felt the need, or ability to applaud after individual arias.

Of the three, I found Agrippina the most satisfying; the music, staging, singing and acting were all excellent, whereas Jason was a weaker work, musically, and I had a few doubts about the staging of The Coronation of Poppea. The set for Agrippina was a simple revolving centrepiece, which alternated between Agrippina’s quarters, bedecked with a blackboard covered with the crazed scribbles of Agrippina’s schemes, Poppea’s room and a blue and gold court room. The costumes were mostly a sort of seedy, fancy-dress mock-historical, with whited-out faces and heavily-applied rouge, imparting a sense of carnival to the production. Agrippina’s heavy blue velvet skirts parted to reveal sunshine yellow satin trousers; Nerone paired a tall grey wig with a camp feathered jacket; Poppea was draped in a toga and the courtiers were in doubloons and hose.

Soprano Gillian Webster seemed to revel in the title role, strutting about the stage and singing gloriously. Her son Nerone was sung by counter-tenor Jake Arditti, who has a strong, clear voice that was well matched to the power of Gillian Webster; his arias were mesmerising, the sort of singing that makes you sit up and pay attention. Michał Czerniawski covered Ottone for an indisposed Clink van der Linde, and sang the part with wistful tenderness. He was in any case cast as Ottone for Coronation of Poppea so he was clearly already in character. His beloved Poppea was the other casting link between the two, sung by Paula Sides. In Agrippina she was delightfully ditzy, inviting us all to adore her, and her light soprano was lovely to hear, although the text wasn’t always clear.

Handel’s glorious music, a pleasing plot and a witty translation (without the distraction of surtitles) made for an evening of fantastic entertainment – I was still smiling the next morning.

On night two, we took a break from imperial Rome, in favour of Greek mythology, although Cavalli’s sprawling original bears little resemblance to the story of the Argonauts that we know. ETO used Ron Eyre’s English version, created for the 1985 Buxton Festival which cuts the work down to a more manageable two hours, and tightens up the plot considerably. I had a few doubts in the first act, and wondered whether too much had been lost, but it all came together so neatly that I was convinced. There’s plenty of comedy in Jason and this production made the most of it. Stuart Haycock and Piotr Lempa as Demus and Orestes were hilarious, with exquisite comic timing, whilst Hannah Pedley’s Medea rose above it all with cool dignity. Clint van der Linde was still unable to sing, but walked the part, I presume because of the technical demands of the fight scenes, whilst Russell Harcourt did a magnificent job singing the role from the pit.

This production lost the monster, but there was a clever magic trick by Cupid when he conjures the storm before Act II, which involved a bowl of liquid changing from clear to black and, amazingly, back to clear, and Medea’s witchcraft was accompanied by pyrotechnic magic. Medea’s hellraising scene has by far the best music in the opera, and Hannah Pedley sang with simmering passion, and instead of unleashing orchestral fireworks, conductor Joseph McHardy kept the accompaniment quiet, letting it bubble menacingly underneath.

The Coronation of Poppea

And so we return to Rome, or rather we didn’t, because this production leapt forward in time to Stalinist Russia. The grim military uniforms and Poppea’s cheap tawdry frocks and brassy wig stripped the work of any glamour, however dubious, leaving only the monstrous behaviour of all the protagonists. On the whole, this worked and there were some nicely thought-out details. The quarrelling gods of the prologue, Virtue, Love and Fortune appeared as Komsomol youths, unfurling banners with their respective attributes (although the set designer loses points for lazily using the Russian Я as an R). Seneca appeared as a Tolstoy-type figure in peasant dress, and the hard-working apple-cheeked Drusilla could have stepped straight off a Soviet propaganda poster.

The weaknesses in this production lay not in the overall concept, but in the extra layers that were added. Poppea’s blonde wig came and went; I wondered if it was supposed to symbolise the golden crown she lusts after as she only wore it with Nerone, but she took it off for their final duet. Poppea and Nerone swerved unconvincingly between naked lust and other distractions – Poppea seemed to be taking drugs and Nerone sang a good part of Pur ti Miro not to Poppea, but to his own reflection in a mirror. This distraction was a pity because musically, Helen Sherman (Nerone) and Paula Sides (Poppea again) were perfect in this gloriously sensual duet, their well-matched voices blending well and aching with passion.

These were just little niggles though and the singing more than made up for them. Hannah Pedley returned as Ottavia, a little more careworn than Medea, but with the same rich voice, powerful and dignified. Her farewell lament was devastating. Young soprano Hannah Sandison is still studying at the RCM but her thoughtful portrayal of Drusilla and a great voice show that she’s a name to watch. She’s been selected as a Samling Scholar for 2014 so we’ll be seeing her again in the North East next year.

All three productions were written mainly for higher voices, but amongst the sopranos, mezzos and counter-tenors, the contrast of Piotr Lempa’s bass really stood out. He sang Seneca in The Coronation of Poppea and plunged into the very depths of the bass range without ever losing tone. One of the highlights was undoubtedly his last scene, with his friends putting in plenty of vocal muscle as they pleaded with him not to die in panicky rising chromatic lines.

I took the risk of booking front row seats for all three productions, and although I was worried about being too close to the stage, a generously spacious pit meant that in fact this wasn’t a problem. It also gave me a chance to watch the orchestra and enjoy the sight as well as the sound of their wonderful instruments – including a harp, two theorbos, a guitar and several sizes of recorder. The orchestra was small but made up for lack of size with wonderful colour, attention to detail and sensitive playing. They were as much a part of these productions as the excellent casts, and the whole ensemble vividly brought to life the exuberance of Venetian baroque opera. More please!

PrevPreviousNovember – baroque month
NextOpera North – Peter GrimesNext
Music in Durham brings you classical music listings, previews, reviews and news for Durham, with a bit of random blogging thrown in. The concert listing pages bring together classical music events from across the City and the University, so whether you’re looking for a great concert to go to, or if you’re planning something and want to avoid clashes, this is the place to look.
Menu
Twitter Facebook-f Envelope