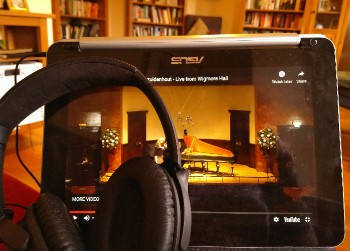 Thoughts on music during the pandemic – a world where I am both filled with good things and sent empty away.

In that golden age Before Covid, I used to look with a mixture of wonder and envy on the social media feeds of people who live in London and who every night had a rich choice of concerts or opera by the world’s greatest musicians. Sometimes I wished I had their opportunities – I follow a few people who were seeing more live opera in a week than I manage in an entire year. But I also wondered sometimes how they coped with such a diverse banquet, and whether just having a choice of cheese or ham sandwiches is actually easier for the brain to handle.

Since lockdown threw the entire musical world online, I’ve been discovering what it’s like to be overwhelmed by musical choice, and I’ve also found myself reacting in unpredictable ways to this new world, which has led me to these musings on my responses to online performance and audiences.

Once I’d got over the initial shock and grief of no live concerts or choir practices, I began to gorge myself on the archive opera broadcasts that were served up all over the internet. I watched things I would never dream of ever seeing live, including productions that I had gazed longingly at through the eyes of Twitter. Sarah Connolly in Ariodante in Vienna, Sarah Connolly in Giulio Cesare at Glyndebourne, Joyce diDonato in Agrippina at The Met (you see a theme here…), that Glyndebourne Rosenkavalier that everyone went on about, and lots of Britten. I spent Good Friday watching Parsifal – after agonising over the many productions on offer – and I mopped up a few standard Puccinis and Verdis that I thought I ought to know. And because this was outside of my normal musical experience, I didn’t feel it as a loss, but rather a welcome opportunity — whereas I carefully avoided concerts, particularly choral music, because that’s what I was so badly missing.

This was all very well until the first live concerts started to come back. To begin with, I was swept away by the sheer emotion of seeing people playing music, and knowing that this was happening at the time I was watching – that first concert by Stephen Hough at Wigmore Hall was extraordinarily moving, but after a while, seeing those empty halls as I sat alone with my headphones and laptop screen made me incredibly sad. One of my personal bleakest points of lockdown came when I was watching a song recital. The musicians were in a dark, empty church, lit only by candlelight and it all felt unbearably lonely. My son wandering into the room at the most emotional point of the programme to tell me about a forgotten stash of leftover Christmas chocolate he’d just found only made me feel even more alone, caught between worlds – not at home but not at the concert either and having no-one to share the experience with. Even though I frequently go to concerts by myself, I’m realising that you’re not truly alone when you’re in a room full of people who are partaking of the same feast.

Empty hall concerts are clearly going to be with us for some time though, particularly here in the UK, so I’m making an effort to work through these feeling of loneliness — incentivised by the fact that early on in a burst of lockdown enthusiasm, I had bought a pass for a major song festival, so I didn’t want that money to go to waste! The careful staging of the Proms formed a useful bridge – I found the pinpoints of light scattered around the hall to be very moving, as I imagined that they were perhaps the spirits of the missing audience, and without going into Last Night politics, putting the BBC Singers in the arena to sing Rule, Britannia back at the orchestra instead of making a poor soloist sing to an empty house and pretend to be having fun, was a stroke of genius.

However, when concerts with actual audiences began again, first in Europe and now a few cautious toes in the water here, I really felt the difference. Even though I was still in that same situation of watching alone on my laptop, and not always live, I could feel the renewed energy and communication between performers and audience, most spectacularly in a recital by Rachel Podger and Kristian Bezuidenhout at Wigmore Hall – their joy at playing for an audience simply radiated out of the screen. It’s glorious too see, but the choice is overwhelming – like those London twitterers, I can now watch the best musicians in the world every night, but I’m paralysed with indecision so I’ve hardly watched anything so far. But at least I know it’s all there whenever I need it even if I am still forced to live my life wanting to break out through the glass screen that I’m imprisoned behind. There are green shoots though and I’m very excited about having a ticket for the day-long Northern Chords festival at the end of October.

There is one real musical experience still left to me though, that doesn’t need an audience or other people, and that’s my own private music making – in my case playing the recorder. With hindsight, it’s now rather fortunate that a couple of hideous experiences last year made me decide that the time had come to stop playing in public ever again. It caused me a lot of heartache at the time, but I came through it to a place where I could play on my own, purely for pleasure, and that’s now become a source of great comfort through all this. It’s also helped to see me through the devastating loss of singing, which is something I’m not at all equipped to do alone, so my voice has just gone silent and I can almost feel my vocal chords rusting up. (I’m also filling the choral black hole by teaching myself to play the piano, but whilst that’s giving me enormous satisfaction, I’m not sure anything I produce really counts as music yet).

The return of audiences to concert platforms has led to some musicians writing about how all this has shown them how much music needs an audience, but I don’t think that needs to be true for everyone. I realise I’m writing this from a position of extreme privilege because for me, music is a luxurious enhancement to my life — I’m not directly reliant on it for my livelihood — and the particular baroque niche I’ve found myself in has a rich vein of repertoire that wasn’t intended for public performance anyway. I don’t think I’d want to sit through a concert of Telemann’s fantasias or Boismortier’s suites, however well performed, but I love playing them myself, and I have a plentiful supply of Bach solos for other instruments transcribed for recorder, so I can let myself be absorbed into his wonderful depths. I’d started to think about playing some carefully distanced duets with a friend, for the pleasure of making music with another person, but local lockdown has put a stop to that plan.

I’ve sung in plenty of Saturday afternoon evensongs, with congregations made up of the clergy and a couple of choir groupies, so I know full well that the joy of singing with other people doesn’t need anyone to be listening. In this strange world where the legality or safety of choirs is constantly in doubt there’s one image that keeps coming to mind — those tiny groups of Roman Catholics in Elizabethan England, hiding in someone’s home, secretly singing William Byrd’s mass settings, proof that music can survive with no-one to hear it, except God, if he happens to be around.

Thoughts on music during the pandemic – a world where I am both filled with good things and sent empty away.

PrevPreviousLetter to Mary Foy from Durham musicians
NextNew music focus: Joanna WardNext
Music in Durham brings you classical music listings, previews, reviews and news for Durham, with a bit of random blogging thrown in. The concert listing pages bring together classical music events from across the City and the University, so whether you’re looking for a great concert to go to, or if you’re planning something and want to avoid clashes, this is the place to look.
Menu
Twitter Facebook-f Envelope