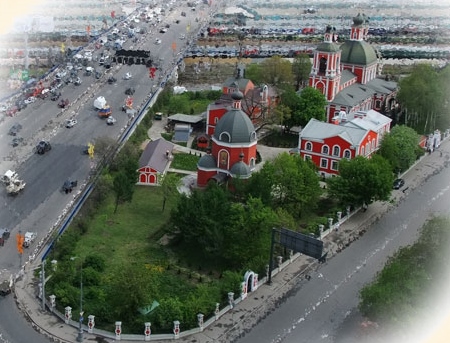 I'm singing Rachmaninov Vespers with Durham Singers at the moment, and although I don't have to battle with the language, I've had to overcome the effect it has on my spirits. Two Russian words sum up the musings in this blog post: 'toska' and 'radost'.

I wasn’t entirely truthful when I wrote the Durham Singers publicity blurb for Rachmaninov Vespers. I wrote about the sensory effect of Rachmaninov’s choral writing; how the music evokes the sights, sounds and smells of the Russian church – but the truth is that it’s not the ecclesiastical smell of candlewax and incense that’s been filling my nose during rehearsals, but the distinctive warm and dusty smell of the Moscow’s secular cathedral – its metro.

For Russian Orthodox Christians, Rachmaninov’s music probably does feel anchored in church; the words are familiar prayers, and the music is built around ancient chants, but for me, coming at the All-Night Vigil (to give the work its proper title) without that background, I’m free to make my own associations. During my time in Moscow, I only popped into orthodox churches occasionally, and when I did, I never had a clue what was going on – there are no service sheets or hymn books, and little congregational participation. So although I spent Monday to Saturday being as Russian as possible, every Sunday I slipped back to the Anglican world, thanks to St Andrew’s Church, a perfect little nineteenth century gothic church hidden just in the heart of Moscow, a few yards from the Conservatoire, and home of the Church of England’s oddest parishes.

The one time of year when I did go to an orthodox service, along with many hundreds of Russians who only ever went to church for this one service, was for the midnight Easter vigil. At midnight, the churches are jam-packed, but after a while, once the procession is done, and everyone has hailed the resurrection, the crowd melts away, leaving just the devout old ladies, keeping watch tirelessly until the dawn. I remember once taking the metro home from whichever gold-domed monastery church I’d been to with my friends, and then spending a while with the tiny congregation in the plain little church that nestled fifteen floors below my kitchen window, tucked in between high-rise apartment blocks and a large motorway flyover. It was more peaceful and less of an ostentatious public display than the service I’d come from, but I didn’t have the stamina to watch right through the night.

I often heard the sound of bells from that little church in my flat, and I hear those bells and all the bells of Moscow again in Rachmaninov’s music. Russian bells are well-made and tuned, covering a wide tonal range, with the deepest ones rivalling those famous Russian bass singers. Just as with English change-ringing, there seems to be some order, beginning with a single chime, and building in tonal and rhythmic complexity as more bells are added into the pattern with what sounds like a wild urgency. Rachmaninov’s bells chime at the most joyful moments of the Vigil – the Alleluias in Blazhen muzh for example, or in the sopranos in Xvalite imya.

In Russian, there’s a wonderful word toska which defines a deeply aching combination of yearning and nostalgia, and which perfectly describes the way that Rachmaninov’s All Night Vigil has been making me feel. What really sets off these feelings is the intense, chant-like passages that feel like Russian folk music – the refrain Blagosloven esi Ghospodi, in the mighty ninth movement, or the prayer to the Trinity at the end of the Gloria. Rachmaninov doesn’t directly quote any folk music, but in these passages of close harmony and dancing rhythms, set over a drone, there is something of those songs which are part of the deep underlying rural culture of Moscow, the world’s biggest village. It’s the music of the street, of the metro, the music of pickled cucumbers and cabbage soup.

The toska also comes simply from the fact that I’m singing in what is, basically, Russian. The actual language is Old Church Slavonic, which in relation to modern Russian is similar to that of Chaucerian English or Middle High German to their modern descendants. There are a few shifts in pronunciation, the grammar is obscure, and some words are unfamiliar, but the basic bones are the same. And so, when I’m singing Rachmaninov every Monday, the person who I become when I’m with my Moscow friends and speaking Russian takes over and I feel as if I’m shifting between two worlds. How can I be simultaneously in a Durham Methodist church rehearing for choir, and in a Moscow kitchen eating borscht? And I’ll confess – I begged for a shot at the alto solo just so that I could sing that wonderful phrase ghospodi bozhe moi, literally ‘O my God’, a phrase which serves the same purpose as its English equivalent, but which drips with passion.

The words themselves also exert that strange pull between the two worlds. On the one hand, there are texts that, in English, are infused into my blood, that I’ve been singing since I was a child – the Magnificat, the Nunc Dimittis and the Gloria, but now transformed by the language and context. You don’t get those three together in an Anglican service anyway, the Mag and Nunc are wrenched apart from each other, and there are extra bits of text in the Magnificat and the Gloria – the Magnificat’s refrain is pure orthodox, a vision of heaven, with Mary set above the ranks of seraphim and cherubim, a musical golden onion dome. One the other hand, there are texts which are completely new to me, because there’s nothing quite like the Easter vigil in the Anglican church. The ninth movement, Blagosloven esi Ghospodi is a dramatic account of the encounter between the angel and the women at the empty tomb and the three Easter hymns at the end recount Christ’s victory over death and the beginning of the apostles’ mission. The music and text are full of hope and triumph, and joy – and I cannot sing the lovely Russian word for joy — radost’ — without a smile.

And in the end, it’s joy that I’ve embraced to get over that terrible feeling of toska that was dragging me down when we started rehearsing the All Night Vigil. Wondering how I was going to get through the next two months without wallowing in self-pity, I found my mind wandering off to explore memories of all the daftest, funniest things that ever happened to me in Russia began to drift into my mind (there are plenty, believe me), and then it settled on the deepest, happiest memories of love and friendship. I can’t find the right words in English, but I can sing for it in Russian.

I'm singing Rachmaninov Vespers with Durham Singers at the moment, and although I don't have to battle with the language, I've had to overcome the effect it has on my spirits. Two Russian words sum up the musings in this blog post: 'toska' and 'radost'.

PrevPreviousDurham Choral Society: Heaven and earth
NextThe Clerks: The Secret Life of J.S. BachNext
Music in Durham brings you classical music listings, previews, reviews and news for Durham, with a bit of random blogging thrown in. The concert listing pages bring together classical music events from across the City and the University, so whether you’re looking for a great concert to go to, or if you’re planning something and want to avoid clashes, this is the place to look.
Menu
Twitter Facebook-f Envelope