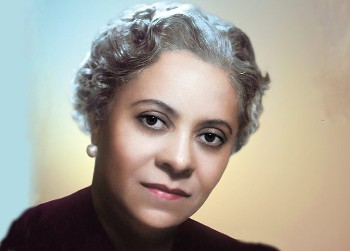 I'm trying to do my own tiny bit to recognise diversity in classical music, and the obvious place to start is Florence Price.

When I looked back over my happiness playlist, I realised to my shame that there were no female classical composers on there. And some of the conversations on social media around the Black Lives Matter protests made me very aware of just how much work classical music still has to do in recognising minority composers and performers. It’s too easy to think that only dead white men were genius composers when it’s only because by the laws of statistics their music is simply more likely to have survived and been acknowledged. So for the women and minority composers whose voices have been lost, or who never had a chance to speak in the first place, I’m going to make an effort to listen more to those whose music we do still have and I’m going to try to make sure that every other piece on this project is by a woman or someone from a BAME group.

I knew nothing at all about Florence Price  except that she’s recognised to be the first African-American classical composer. Even worse, for a long time I had merged her in my mind with the notorious Florence Foster Jenkins, which probably didn’t help.  I picked the violin concertos to listen to on the basis of the description by Alex Ross in a piece for the New Yorker about Florence Price. He writes of the second violin concerto: ‘This terse, beguiling piece has an autumnal quality reminiscent of the final works of Richard Strauss. It deserves to be widely heard’.

This, and Price’s first concerto, have only recently been rediscovered, having been found during renovation by the new owners of a dilapidated house in Illinois that had once been Price’s summer home.

I definitely agree with Alex Ross’s assessment that this needs to be more widely heard. At just fifteen minutes long, it would make a great concert opener – it has a punchy, dramatic opening, with heavy chords and after a digression into a somewhat eerie passage, laden with flutes, it broadens out to become sweepingly romantic – music of vast open landscapes and big emotions.  If I had been asked to place it, I would have guessed that it was written much earlier than 1952.

The autumnal quality that Ross mentions comes out in the long, expressive lines of the violin solo, and there are some utterly rapturous trumpet solos that add a distinctively bluesy flavour to the piece. Orchestration is clearly one of Price’s strengths: there are interesting colours throughout, and towards the end there’s a lovely passage where the orchestra play quite a solid, hymn-like melody, led by the brass, and the solo violin loops and whorls restlessly around it, but it’s carefully balanced so that the solo stands out like a gold thread running through the texture. She makes good use of the winds – Dvořák’s influence on American music is strong here – and there’s a surprising piano solo at the beginning that made me check whether I was actually listening to a piano concerto by mistake. The restlessness that drives most of the piece calms down at the end: the manic violin comes quietly down to earth in a glowing exchange with a solo cor anglais and a touch of piano, before a brief coda ends the piece with a flourish that seems designed to encourage applause.

I’m very taken with this and it’s growing on me with repeat listenings. It’s perhaps a bit too heart-on-sleeve for some tastes, but for a quick hit of searing romance when you don’t have time for, say, an entire Rachmaninov symphony, it’s great. The trumpet bits make me swoon a little every time and I love the peaceful bit at the end. This has felt like a good starting point for Price’s music, and it’s piqued my interest enough to want to listen to more of her work.

I'm trying to do my own tiny bit to recognise diversity in classical music, and the obvious place to start is Florence Price.

PrevPreviousHaydn Op76 string quartets
NextLetter to Mary Foy from Durham musiciansNext
Music in Durham brings you classical music listings, previews, reviews and news for Durham, with a bit of random blogging thrown in. The concert listing pages bring together classical music events from across the City and the University, so whether you’re looking for a great concert to go to, or if you’re planning something and want to avoid clashes, this is the place to look.
Menu
Twitter Facebook-f Envelope