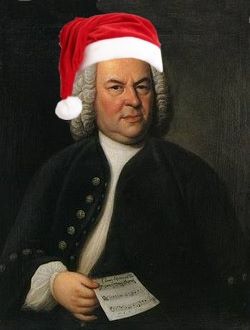 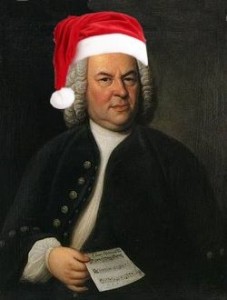 I have to confess that before this evening, I had never sat down and listened properly to Bach’s Christmas Oratorio. I usually stick it on the stereo at some point over Christmas, usually on Christmas morning while I’m cooking, so it’s always been there in the background, so the sound of the notes is very familiar, but with the detail and text passing me by. I’ve never sung it either – a choir I was in did it one year, but I was a bit busy having a baby. So when I heard that David Stancliffe was putting on a performance in Durham Castle, I realised that it was time I filled this big hole in my musical education.

The first thing that is noticeable in a concert performance is the structure of the piece: it’s really six cantatas stuck together, generally following the familiar pattern of opening chorus, solo arias and recits, interspersed with chorales, and finishing with a grander chorale setting. The cantatas were put together for the Christmas season of 1734-5 mostly from earlier secular material, and the series runs from Christmas day through to Epiphany. This evening, we had the whole lot, bar part IV, (which I think gets missed mainly because it’s the only one that needs horns, so it’s a bit inconvenient for the orchestral budget, but it’s also a more reflective piece that can be omitted without breaking the narrative). David Stancliffe has established a regular series of period instrument performances over the last few years, bringing together a mixture of students and experienced professionals, to provide a welcome addition to the local music scene, and neatly filling the hole left by Palatinate Voices.

The programme notes and David Stancliffe’s own introduction emphasised the fact that he had equal numbers of singers and instruments, with the aim of creating a perfectly balanced chamber music feel, rather than a big choir being accompanied by an orchestra. While this is no doubt a very laudable, and historically accurate approach that can work well with more experienced singers, it was a big ask for a chorus of over-worked students at the end of term and unfortunately the singers were often overwhelmed by the orchestra, particularly the oboes.

Hugo Hymas was a fantastic Evangelist, with clean, clear singing, excellent German, and well structured phrases. More importantly, he got the right balance between expressiveness and moving the story onwards. He also sang the aria Frohe Hirten Eilt (Joyful shepherds, hurry): with Emma Halnan’s delicate flute floating airily above and Deborah Thorne’s pizzicato cello, this was a real treat. I also enjoyed mezzo Sarah Johnston’s beautifully controlled long notes in Schlafe, mein Liebster and some agile soprano arias sung by Charlotte LaThrope. Ben Rowarth took most of the bass arias, and was suitably nasty in his brief portrayal of Herod. Smaller solo roles were sung by soprano Camilla Harris, alto Michael Ash, tenor Pierre Dechant and bass Ben Eadon and were all of the high standard we expect from such a group.

The first two parts cover Christmas itself – the first, for Christmas day is suitably joyful, with a good dose of baroque trumpet to send the spirit soaring, especially with the fine playing we had this evening by Max Bronstein, Chris Parsons and Dan Walton. The mood softens for part two, when we move to the shepherds, with lots of wind instruments for their pipes. The Siciliana Sinfonia that opens this sections had a lovely flow to it. The section I enjoyed most though was Part Five; the words are suffused with the idea of light, from the star in the East and the light that Christ brings to the world, and the whole performance of this section glittered and shone, with renewed energy.

And at the end, Bach had one little surprise left for me. (It shouldn’t have been a surprise, but, as I said, the Christmas Oratorio often washes over me, and by the time I get to the end, I’m usually too busy worrying about gravy or sprouts). Two weeks ago, I was singing the final “Passion” chorale in St Matthew with unstoppable tears streaming down my face. Bach uses the same chorale tune in the Christmas Oratorio, and ends with the most gloriously uplifting setting of it I could possibly imagine. Interlaced with an absolutely stunning trumpet part, the tune rings out jubilantly. These two contrasting settings are as good an example as any of Bach’s genius, as he sums up the entire Christian message, from darkness to light, through one simple tune. I listened last night and couldn’t stop smiling.

PrevPreviousThe Sixteen Choral Pilgrimage dates announced
NextFantasy Carol serviceNext
Music in Durham brings you classical music listings, previews, reviews and news for Durham, with a bit of random blogging thrown in. The concert listing pages bring together classical music events from across the City and the University, so whether you’re looking for a great concert to go to, or if you’re planning something and want to avoid clashes, this is the place to look.
Menu
Twitter Facebook-f Envelope