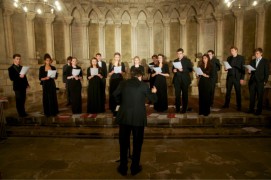 Durham University Chamber Choir travel the length of the Americas drawing on the rich history and traditions of the whole continent to present a programme that was thrilling and challenging. 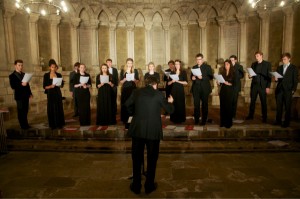 The eyes of the world are on South America at the moment, and last night’s concert in the cathedral, given by Durham University Chamber Choir was a timely reminder that there is much more to that continent than football. Baroque treasures reflected the wealth and power of the conquistadors, whilst James MacMillan’s Cantos Sagrados turned to the nastier stories that lie behind the continent’s glamour. There was music from further north too, from the United States and Canada, to cover the whole span of the Americas.

Some of my readers will know that I have a bit of a thing for South American baroque music, and DUCC had selected some fine examples. A spirited performance of an 11-part Dixit Dominus setting that may or may not have been by Juan de Araujo formed the centrepiece of the first half. It begins quite sensibly, sounding like any standard European setting, but the music becomes wilder, piling up rhythmic and harmonic interest, and the choir threw themselves into it with gusto – helped along by a bit of percussion. The Gloria begins in strangely mournful fashion but this turns out to be just a foil before a final burst of colour and some amazing chromatic Amens. I was impressed that even in the loudest parts, and with the challenge of Durham cathedral’s big acoustic the choir retained all their crispness and definition.  The same zinginess was there in Juan de Padilla’s Deus in adjutorium, taken at a leisurely pace by Hugo Hymas, giving the music time to ring out.

Music from North America provided a calming contrast to the Latin brilliance. Hawley’s two secular Latin motets began a little hesitantly, but settled into tranquillity, their shimmering harmonies not unlike Samuel Barber’s famous Agnus Dei that followed. Hugo Hymas allowed no sentimentality in this, giving it a good pulsing flow and a powerful bass line, although the choir’s crescendos were a bit uneven across the parts.

Canada has a strong Anglican choral tradition, represented here by Healey Willan, who was born in England but whose career as a church musician took him to Toronto. Rise up my love and Fair in face are gentle, unpretentious anthems, very much in the style of the more lyrical works by Parry or Elgar; their flowing melodies were given expressive shape by the chamber choir.

The second half opened with one of my favourite South American baroque pieces, de Araujo’s  ¡Salga el torillo hosquillo! which sets a Spanish text in which the Christ child becomes a toreador fighting the devil in the form of a bull, and the choir did not disappoint. The opening full-voiced cries, resonating through the building, accompanied by a bass drum and Hector Sequera on guitar gave me goosebumps, and the rich tones of alto soloist Marnie Blair added heat to the vivid words.  My only small complaint in this piece was that the choir needed a bit more work on their Spanish – not a language that singers are called on to use very often.

We were then flung from the exotic world of the bullring to brutal reality by James MacMillan. Cantos Sagrados sets two poems by Chilean Ariel Dorfman and one by Ana Maria Mendoza, mixed with fragments of liturgical Latin lending extra irony to the bitter words. Dorfman’s poems deal unflinchingly with the horrors of military dictatorship – bodies fished out of a river, tortured beyond recognition, and a moment of grace between a victim and his executioner. Mendoza’s Virgin of Guadalupe laments the fate of the indigenous people, oppressed and killed by the conquerors. The poems make for tough reading in themselves, and MacMillan’s difficult music piles on the rage and the pain. In the first, Identity, cries spat out by the choir are punctuated by slamming organ chords, the quiet passages brimmed over with fury and pity. The broken innocence of children pervaded the Virgin of Guadalupe with its slow shifting harmonies, and the mutterings of Sun Stone conveyed the urgency of a last hastily whispered conversation and plea for forgiveness before the firing squad. MacMillan’s music makes uncomfortable listening, challenging the performers and listeners to face horror without flinching. Hugo Hymas, the University Chamber Choir and organist Michael Haynes pulled off an unforgettable performance, capturing both the brutality, the pity and the final possibility of redemption.

In an absolutely brilliant bit of programming, Hugo Hymas took us from the image of light that fills the condemned man’s dying moments to Moses Hogan’s arrangement of This little light of mine. Soprano soloist Elen Roberts offered a soothing balm to the pain of the Cantos Sagrados that moved me to tears, then the choir came alight with perfectly balanced chords on the final “shine”. Eric Whitacre’s Alleluia was neat and clear, with good dynamic shape and a beautifully graceful solo by bass James Quitmann. The concert closed with another Moses Hogan arrangement. The Battle of Jericho was delivered in a thrilling whisper, with a final flourish as soprano Ella Phillips soared up to a flamboyant high C to end what was one of the best concerts I’ve been to this year.

Durham University Chamber Choir travel the length of the Americas drawing on the rich history and traditions of the whole continent to present a programme that was thrilling and challenging.

PrevPreviousComing soon: Monteverdi L’Orfeo
NextSome thoughts that are leftNext
Music in Durham brings you classical music listings, previews, reviews and news for Durham, with a bit of random blogging thrown in. The concert listing pages bring together classical music events from across the City and the University, so whether you’re looking for a great concert to go to, or if you’re planning something and want to avoid clashes, this is the place to look.
Menu
Twitter Facebook-f Envelope