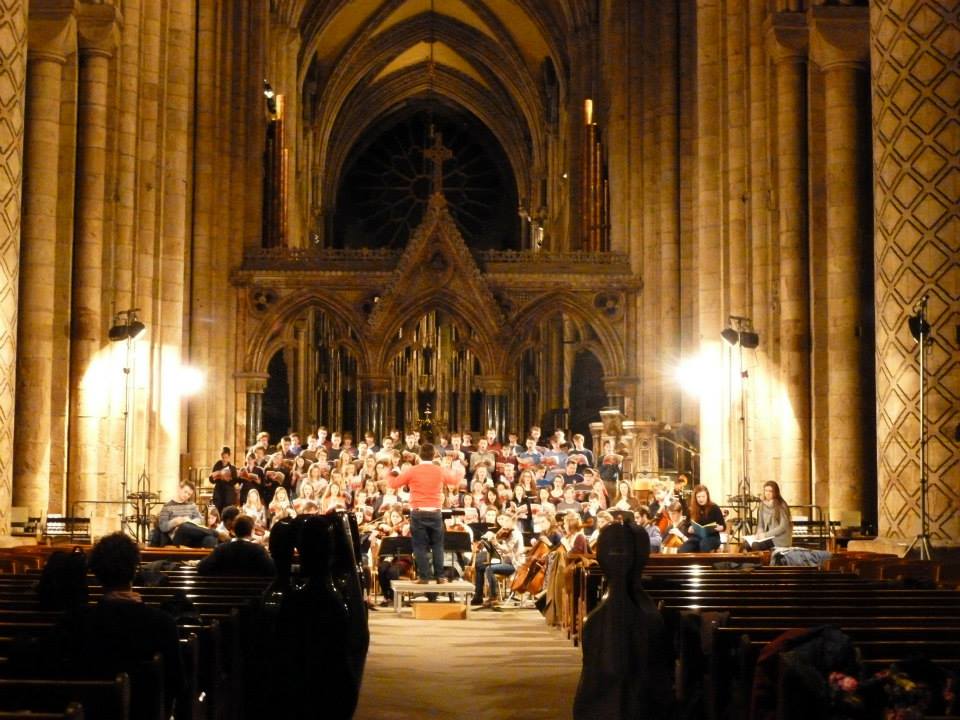 Ben Rowarth's "Christus: A Passiontide Sequence" is a powerful and provocative new approach to the story of Christ's Passion, combining imaginative writing with a firm grounding in musical history. This startling new work was combined with an energetic performance of Mozart's Requiem, sung by the Durham University Choral Society and Chamber Choir, conducted by Mike Summers.

I have heard a number of Ben Rowarth’s choral works performed by his choir, “Renaissance” and have had the pleasure of singing his award winning Where is thy God myself, so I was delighted when I heard that Durham University Choral Society had asked him to write a new large-scale work from him for their Lent concert – the first time in the society’s long history that it has commissioned new music.

Christus: A Passiontide Sequence is a startlingly original work in its construction, with a sensitive  and thought provoking selection of texts that illuminate the familiar story of Christ’s Passion in unusual ways. The opening section takes us way back in time; bleak, stark verses from Lamentations and a section of the Matins Reponsory used in Advent remind us of Christ’s place in the history of the Jews, and their desperate longing for their promised Messiah. It began with just the sopranos chanting the text on a single note that led into the plainsong Miserere – ancient musical history to match the Old Testament words – and gradually built up, first with a simple parallel line, then a hum and echoes from the men, and finally the noisy tumult of a mocking crowd. Throughout this exposed and sustained opening, the Durham University Choral Society singers showed impressive unanimity with controlled, disciplined singing.

The work then moves into a series of motets that mix Bible verses – mostly either the words of Christ himself or psalm verses that foresee Christ’s suffering – with Latin texts from the Good Friday Tenebrae Reponsories providing commentary. The music retained the long, drawn-out phrases of the opening section, keeping the plainsong as an anchor, and using shifts of texture and harmony to create effect, rather than melody. The choral society were complemented by Durham University Chamber Choir, who moved around the cathedral, their own music cutting cleaning through the texture of the larger ensemble – a particularly effective moment came at the end of the Good Friday motet, when the text spoke of Christ being betrayed into the hands of the wicked, and with one choir in front and one behind, we were enveloped and trapped inside the sound.

Judas and Pilate are usually the pantomime villains of the Passion story, but Ben Rowarth challenges us to look more carefully at these ordinary people, whose frailties are apparently such a necessary part of God’s plan for salvation. Judas speaks through an aria for bass solo, sung with great depth of tone and emotional power by Peter Coulson. In words written by the composer himself, Judas questions God’s purpose, demanding to know why one man is condemned from birth to suffer eternal torment for the betrayal that actually saved the world. Judas frames his difficult questions in long, rising phrases, creating a great outpouring of unresolved despair and bitterness. This aria was provocative, a startling jolt beyond what we expect in a Passion narrative, and incredibly moving.

Pilate’s voice came through the second of three evocative orchestral interludes, for strings and harp, that provided space for reflection. Pilate’s music was introspective, disjointed, with solitary notes from the harp pinging through dense repeated string chords, the music tailing off abruptly with high unresolved notes, perhaps suggesting Pilate washing his hands of the whole business. The first interlude reflected on Christ’s temptation by the Devil and his acceptance of his role, with playful, restless string arpeggios battling against a longer, more peaceful melodic line.

Tenor soloist Hugo Hymas sang the words of Christ on the cross, joined by soprano Charlotte LaThrope as Christ gives up his soul to death, and all the other musicians dropped out, leaving just her ethereal clear soprano voice evoking the spirit soaring to heaven.

There are no answers at the end of Christus. Instead, through the words of a simple child’s hymn “It is a thing most wonderful” , we are forced to confront the impossibility of imagining Christ’s suffering and what it means to the world. Through the six verses of the hymn, the music expressed a fervent search for faith, but still with hints of doubt, with high, fragmented soprano parts tailing off among the firmer, more certain lower parts. The final line, a repeat of “It is a thing most wonderful” was rich and warm, but the questions remain, buried in unresolved notes deep inside the harmony. Ben Rowarth has created a wonderful thing, with Christus: A Passiontide Sequence; provocative, intense and uneasily beautiful.

Coming after this, Mozart’s Requiem was initially a bit of a jolt – suddenly in the place of dense harmonies and textures came tunes, semiquavers and energy. After the intense control and concentration required by Christus there was also a palpable sense of relaxation from the choirs as they launched into the Introit. Conductor Mike Summers manoeuvred his large forces with impressive speed and dexterity through the fast fugues that open and close the Requiem; the effect was like watching a juggernaut taking a tight corner, and you marvel at the skill of the driver.

By contrast, the inner choral movements went for power and grandeur, luxuriating in the big sound that the choirs were capable of, but never becoming stodgy. I enjoyed the lovely Lacrimosa which had a gently comforting lilt, an absolute certainty in the midst of woe that everything was going to be ok, and the famous trombone solo that opens the Tuba Mirum was cleanly elegant.

The three soloists from the first half were joined by mezzo Polly Leech, who was sounding gloriously rich and vibrant, particularly in her solo passages. The solo quartet as a whole were well blended, but a little quiet at times.

This was a demanding concert for the singers, and DUCS demonstrated an impressive range of ability and musical sensitivity across the two very contrasting pieces. Mike Summers is taking them in exciting new directions, and I look forward to seeing what they will do next – and of course to seeing what Ben Rowarth will do next too.

Ben Rowarth's "Christus: A Passiontide Sequence" is a powerful and provocative new approach to the story of Christ's Passion, combining imaginative writing with a firm grounding in musical history. This startling new work was combined with an energetic performance of Mozart's Requiem, sung by the Durham University Choral Society and Chamber Choir, conducted by Mike Summers.

PrevPreviousOrlando Consort: Guillaume Guillaume
NextOn reviewingNext
Music in Durham brings you classical music listings, previews, reviews and news for Durham, with a bit of random blogging thrown in. The concert listing pages bring together classical music events from across the City and the University, so whether you’re looking for a great concert to go to, or if you’re planning something and want to avoid clashes, this is the place to look.
Menu
Twitter Facebook-f Envelope