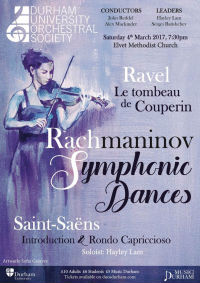 Chamber conductor John Reddel gave supple, flowing accounts of the Ravel and of Fauré’s Pavane. Inspired by baroque dances, Le Tombeau de Couperin is a “homage” to Couperin, and also to friends of Ravel’s killed in the First World War. Its mood is reflective rather than sombre, and Reddel caught this well, particularly in the third movement, a menuet, where behind the sweetness of the playing, there was also a sense of loss. The quirky second movement is my favourite; the orchestra brought out the clock-like pulse very strongly so that as the movement slowed to its end, it felt like time slowing down.

There was a lot of very good wind playing this evening, beginning with the elegance of Freddie Hankin’s oboe solo that opened the Tombeau, and rippling lines from the flutes. Ellie Holland’s flute solo in Fauré’s Pavane was dark and husky, and the answering phrases came from a tightly blended pairing of oboe and clarinet. The woodwind solos floated on a solid pizzicato base, that again flowed with a strongly defined pulse before the piece blossomed into the big string passage. The Pavane wasn’t included on the original concert listing and I wonder if was a late addition as some of the joins seemed a little fuzzy.

After these two graceful French pieces, the concert moved up a significant notch on the energy scale, with Hayley Lam giving a polished and assured performance of Saint-Saëns’s violin showcase Introduction and Rondo Capriccioso. I enjoyed Lam’s chocolatey tone in the brief slow opening before she and the orchestra burst out into the energetic main theme. The orchestra swayed through their passages with a good lilt and a couple of nice rubato moments, with the strings letting their full sound blossom. Hayley Lam floated calmly above them, although perhaps a little too calmly, as I would like to have seen a little more emotional engagement between her and the orchestra.

The full symphony orchestra came on for the second half of the concert, with Alex Mackinder giving flamboyant direction through Berlioz’s Roman Carnival Overture and Rachmaninov’s Symphonic Dances. Mackinder set out the Roman Carnival Overture in bold swooping statements, with lots of contrast, giving a sense of all the different carnival figures whirling past. The cellos and double basses shone at the end of the Berlioz, giving a preview of the darkly passionate playing that we would be getting from them in the Rachmaninov, and the piece ended with exciting trombones and some deliciously clean, clear trumpet trills.

Rachmaninov’s Symphonic Dances are the last piece he wrote, and in them he brings together the threads of his life’s work, including a quote from his first symphony, the Dies Irae plainchant theme that he used on several occasions, and finally, gloriously, a quotation from the All Night Vigil, which emerged triumphantly in the DUOS cellos after the terrifying shrieks of the Dies Irae. There are also elements of Rachmaninov’s life in America: strong jazz rhythms, and a glorious saxophone solo, which was played with an uninhibited freedom and passion. The strings then picked up this expressive mood, creating an expansive, generous line: this section makes me think that Rachmaninov is looking away from America and back to the huge landscapes of Russia, and the way DUOS played it, it certainly came across that way. The thundering march sections of the first movement that frame this nostalgic passage developed nicely: the first was a seething mass of energy and excitement, then when it returned after the nostalgic central section, Mackinder turned the mood to a proud defiance, much more angular and fierce.

The DUOS brass and strings created a wonderfully ghostly atmosphere at the beginning of the second dance; the strings translucent, while the muted brass were coldly sinister. Leader Sergei Batishchev’s violin solo came right from the heart, absolutely laden with sorrow and passion before the waltz theme developed. There was more nice wind playing here, and in the final movement particularly in the cleanly executed flute runs, and some effective quiet brass. I enjoyed the end of this movement too, when the pizzicato violins seemed to be building to a climax before suddenly dropping away.

In the final movement, one gets the sense that Rachmaninov is fighting against time and death, with so much still to say that he’s pouring it all out into one last musical testament. Mackinder balanced his forces well (bar the occasional “wall-of-sound” moment) so that the wind solos cut nicely through the texture. After more fierce defiance in the opening, the mood turns contemplative, exploring different ideas often in solos for the lower instruments – the bass clarinet particularly stood out here. Finally though, the oboes and flutes stir things to life for the Rachmaninov’s final battle between life and death. Although we know that for Rachmaninov, it was death who won, as it always does, but in the music, it’s life that is victorious and DUOS made that quite clear.

PrevPreviousMonteverdi Vespers diary 1. Anticipation
NextNot the Messiah…. Israel in EgyptNext
Music in Durham brings you classical music listings, previews, reviews and news for Durham, with a bit of random blogging thrown in. The concert listing pages bring together classical music events from across the City and the University, so whether you’re looking for a great concert to go to, or if you’re planning something and want to avoid clashes, this is the place to look.
Menu
Twitter Facebook-f Envelope