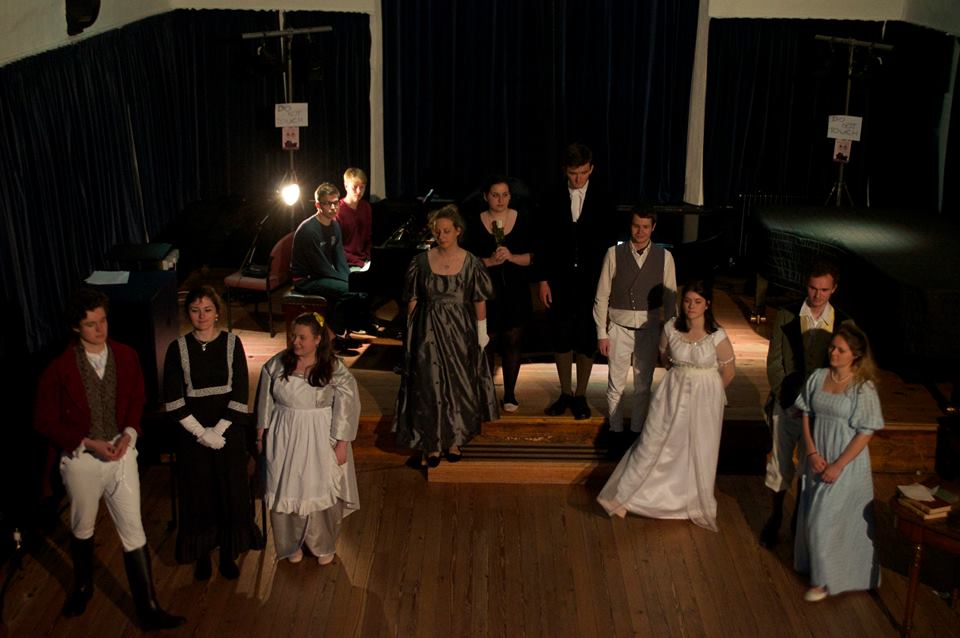 Although I take great pleasure in most of Jane Austen’s novels, I’ve never really got on with Mansfield Park, so when I heard that Durham Opera Ensemble were performing an operatic version by Jonathan Dove I was intrigued to see whether it would be more enjoyable than the book. The answer, most emphatically is yes: I was charmed and delighted by both the music and the production.

Alasdair Middleton’s libretto streamlines the plot admirably, keeping just ten core characters: the Bertram parents, their children Maria, Julia and Edmund, Maria’s fiancé Mr Rushworth, the Crawford siblings, Mrs Norris, and the heroine, Fanny Price. The result t is a little like Tchaikovsky’s treatment of Evgenyi Onegin which is subtitled ‘lyrical scenes’: you perhaps get a bit more from it if you know the full story, but if you don’t, there are a few little confusions, but it doesn’t really matter.

Dove’s score sparkles with Regency grace from start to finish. The singers are accompanied by a relentlessly energetic piano duet which adds witty comment and colour to the action, and enhances the sense that the audience have been dropped into an elegant drawing room. Pianists Will Ford and Josh Ridley, who were also the production’s musical directors, were heroic. The piano part constantly drives the action and pace of the opera, keeping everything alive, and their playing was sensitive to every nuance of the action. The vocal parts sounded very challenging to sing but were easy on the ear, and all the cast seemed thoroughly comfortable with the music. Emily Barnes gave an outstanding performance as Fanny Price, particularly in her solo scenes, where she melted my heart with her arias expressing her quietly steadfast love for Edmund – she’s still only in her first year, so I shall be looking forward to hearing more of her. Opposite her, Charlie Jefford was a warm and affectionate Edmund, with a pleasing, rounded baritone, contrasting with the flighty tenor characters. Tom Brooke was immensely entertaining as poor Mr Rushworth, always a little clueless, last to realise what’s going on, and Sam Kibble was a cool, callous Henry Crawford. Claire Ward gave some dazzling singing as Mary Crawford, bubbling flirtatiously through some really demanding music.

DOE staged this chamber opera in the small Concert Room at the music department, with the audience seated college-chapel style in rows facing inwards, so that we were immersed in the action. This also meant that we were able to see every raised eyebrow, every significant look, on which so much of Jane Austen’s wit depends and all ten singers really made the most of this, raising plenty of laughter from the audience. Emer Acton and Fiona Brindle excelled here as the bitchy, scheming Bertram sisters, every look loaded with meaning, and good diction meant that we could enjoy it all thoroughly. Sophie Kidwell as Mrs Norris scowled and bossed everyone around with lots of character, and Florian Störz was a commanding presence as Sir Thomas Betram, particularly in his fiercer scenes. As Lady Bertram, Chloe Burrows had the job of controlling the opera’s eleventh actor – Patsy, a very well-behaved pug dog, and she brought out her character’s own self-absorption and neglect of her family responsibilities very well, with some excellent singing.

Dove gives the cast a good number of ensemble pieces, including little sung chapter headings to introduce each scene, and plenty of chaotic Mozart-like numbers where every character is singing their own thing. A madcap exchange of letters neatly summarised all the romantic entanglements that determine the fates of the younger generation of characters, and the cast managed this particularly well, so that we were able to keep up with the plot. Despite claims to the contrary in the cast’s programme notes, the dancing in the ball scene was all done with style, and the theatricals scene was full of humour.

Musically and theatrically, this was a much bigger challenge for Durham Opera Ensemble than their usual summer baroque fare, but they pulled it off quite brilliantly. Don’t bother with the book, but if you ever get a chance to see Mansfield Park the opera, don’t miss it.

PrevPreviousThe Sixteen Choral Pilgrimage: The Deer’s Cry
NextOrgan recital – Francesca MasseyNext
Music in Durham brings you classical music listings, previews, reviews and news for Durham, with a bit of random blogging thrown in. The concert listing pages bring together classical music events from across the City and the University, so whether you’re looking for a great concert to go to, or if you’re planning something and want to avoid clashes, this is the place to look.
Menu
Twitter Facebook-f Envelope