Musicon: The Clerks – Tales from Babel 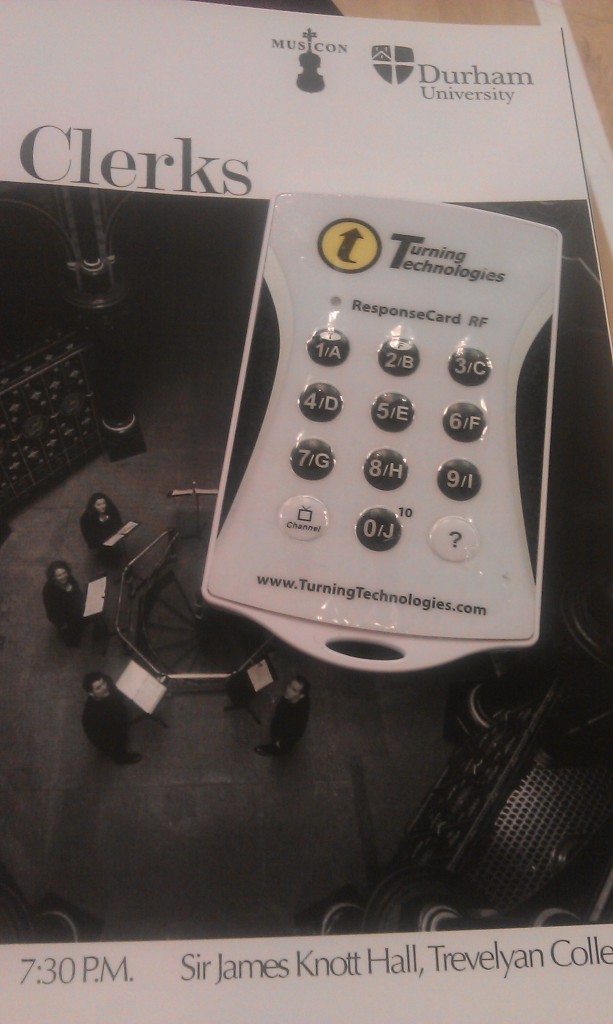 You don’t normally get handed an electronic gadget and a questionnaire when you settle down in your seat for a concert, nor do you get a data presentation straight after the interval. Last night’s Musicon event by The Clerks was concert, drama and scientific experiment all rolled into one gloriously entertaining whole. I’ve already written a bit about the science here in a concert preview (where you can also find a link to the project website) so I won’t repeat myself, except to say that the scientists working with The Clerks are studying how we process multiple strands of speech.

Most of the concert was made up of two works by Christopher Fox, and incorporated the “cocktail party problem” in a witty mixture of music and drama. In the first half, “Tales from Babel” the six characters, Roger, Frances, Matthew, Chloe, Harold and Patrick are at a garden party to celebrate the construction, not of the tower of Babel, but of Roger’s elaborate gazebo. The gazebo is hymned in mock solemnity with music based on Urbs beata Jerusalem but just as in the Old Testament Babel story, unity and harmony disintegrate into chaos and acrimony, particularly when the party, like all good middle-class parties, degenerates into drunken madrigal singing. A short prologue represented the singularity that existed before the Big Bang, before time, space and noise began, with eerie, discordant vocalisations on the musical scale degrees Si, Ut, La, Ri, Tee, and it also felt like an aural pallet-cleanser, cleaning stray junk noise from my head.

The first test was straightforward – the six characters introduced themselves in the style of personal ads, and we had to write down various details. The second was a harder version of one of the online tests – we had to identify the last word of sentences that were sung against varying backgrounds. This was where our handheld gadgets came in, and it meant that speech scientist Sarah Knight was able to present instant results to us, and explain what the tests involved. The ambient noise was either silence, a sshh sound, sung vowels, or spoken text, and further variations were introduced by changing the volume of the background and the predictability of the sentences.

The Clerk’s interest in neuroscience came about because of the extensive use of simultaneous texts by medieval composers, and they combined this with another common medieval habit, the use of contrafacta – the creation of a new text for old music. After the Mass was a 14th century English piece with the text updated to modern English, and Lament on the death of Michael Jackson set new text to music lamenting the death of Machaut. Usually when I hear medieval polytextual music, it all washes over me, because the language is hard to follow anyway, but in the sharp focus of modern English, the music made me feel disoriented and even a little queasy as my brain tried to follow the two texts.

Roger go to yellow three… plays on the Brungart tests, designed for the US Air Force, in which the listener has to follow the instructions for one named person against a background of similar, conflicting instructions. There’s a straight example of the test on the website – and jolly tough it is too. The piece began with the six characters reading the test words, but it gradually falls apart, as the characters begin to become themselves, and spoken words become a sung babble of competing monologues. It required incredible discipline and musicality to pull off – not to mention the ability to do it all with a straight face. Eventually the characters realise that they’re part of an experiment and being observed, and turn their anger on us, the audience:

Look out there. The ears pricked, the eyes alert,
the pencil lead ready to tick and cross.
Pricks with ticks.
It’s the crossers I can’t bear.
Like flies stuck to the wall… with their own mucous
Devouring every word… with their own vomit
Get me some fly spray
Pass me the paper.
I’ll zap them.
I’ll splat them.
That’ll teach them.
That’ll learn them.
Swat them with copies of their smug questionnaires

Has an audience ever been treated with such contempt? I couldn’t stop laughing. (In case you’re thinking that I have unerring ability to identify text, I confess, the libretto, and a complete performance, are on the website).

It was brilliant, witty but not exactly easy on the ear, and I went home with a headache, but at least it was a headache acquired in an entertaining and interesting way. To soothe our troubled minds though, The Clerks ended the concert with a beautiful piece of Josquin, Consideres mes incessantes. As I listened to it, I found myself more attuned to the individual parts than I usually am when I’m listening polyphony; perhaps I should do Brangart tests before going to any concert. 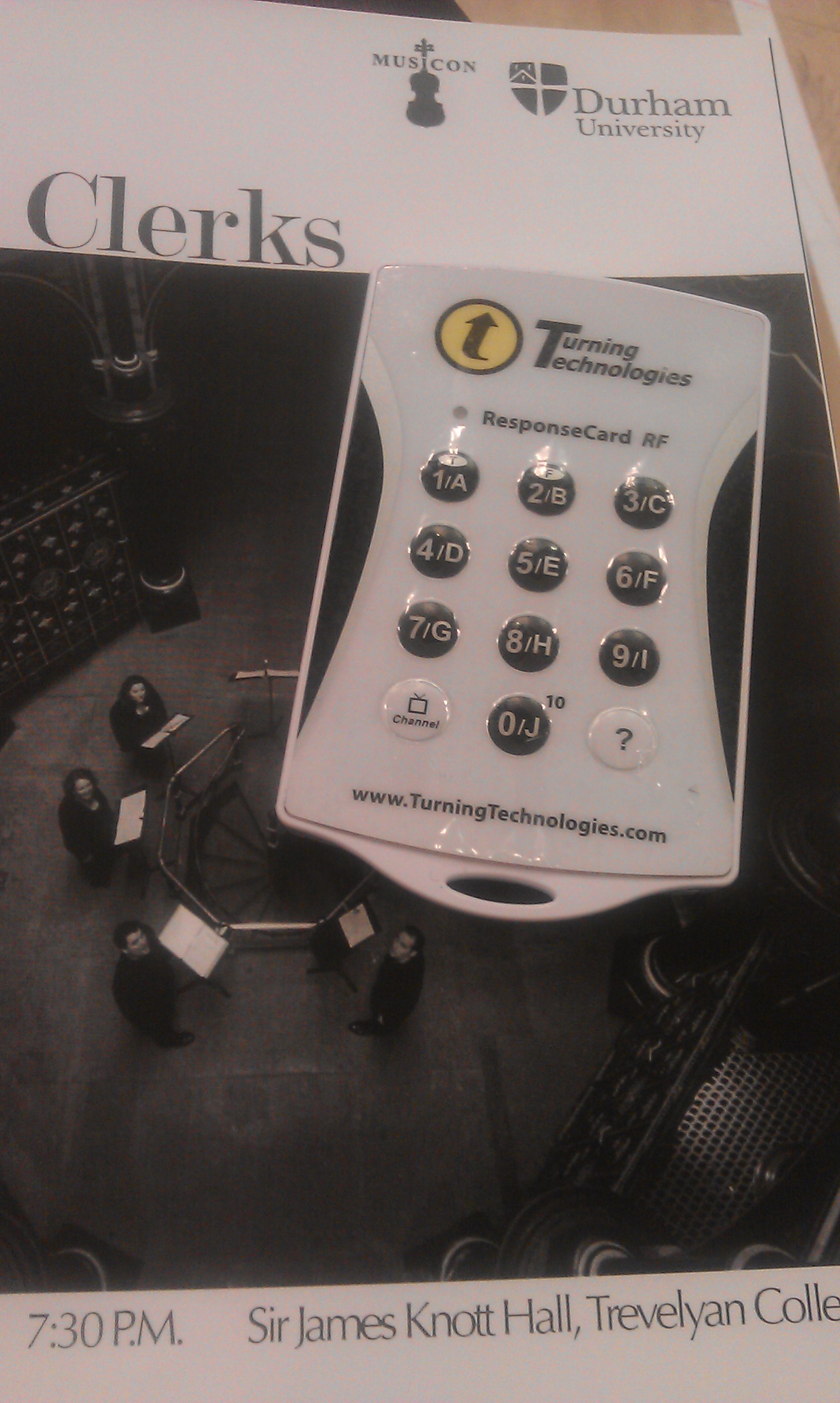 PrevPreviousThinking about the St Matthew Passion
NextNorthern Spirit on Radio 3Next
Music in Durham brings you classical music listings, previews, reviews and news for Durham, with a bit of random blogging thrown in. The concert listing pages bring together classical music events from across the City and the University, so whether you’re looking for a great concert to go to, or if you’re planning something and want to avoid clashes, this is the place to look.
Menu
Twitter Facebook-f Envelope