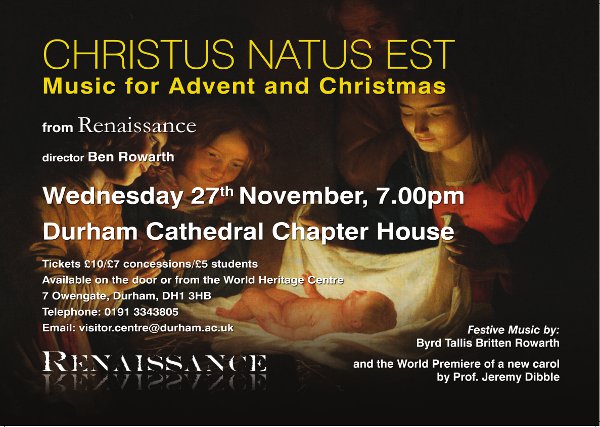 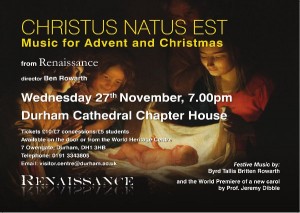 Because of a mix up over the starting time, we got an impromptu pre-concert talk from Ben, in which he emphasised the importance of the text in all the pieces we were about to hear.  Some were simple and familiar – Ave Maria, the devastatingly sad Coventry Carol, Away in a Manger; whilst others were more complex, such as Hymn of the Nativity, a poem full of startling paradoxes by the Elizabethan Robert Crashaw and set by Kenneth Leighton; or Hildegarde von Bingen’s sumptuous Ave Generosa which opened the concert.

The music in the first half was drawn from the mystical aspect of Christmas devotions – the miracle of the virgin birth, and the purity of Mary. The number of singers gradually increased, from Hildegarde von Bingen’s sinuous and compelling solo melody, up to the polyphonic glories of Victoria’s 8-part Ave Maria and the intense dissonances of Tavener’s Hymn to the Mother of God. Ben dispersed his singers around the chapter house to great effect, and I was struck by how they all moved serenely to their next positions with no fuss at all, whilst sections of the plainchant Matins Responsory linked everything together. The second piece on the programme the anonymous 14th century pilgrim hymn O Virgo Splendens was particularly effective, with the three voices spread across the space, but merging into one carefully crafted sound. Britten’s Hymn to the Virign of course worked perfectly in this setting, and was sung with exquisite precision.

During the bigger pieces that ended the first half, which included one of my own Christmas favourites, Tallis’s Videte Miraculum Ben Rowarth kept his singers tightly controlled, so that the sound blossomed through the generous acoustic of the Cathedral Chapter House without ever being overwhelmingly loud. Unusually for Renaissance, one or two voices stuck out a little, particularly in the Tallis, but this could just have been because I was sitting quite close to the front – for a mid-week concert on a cold November evening, it was very well attended, and there weren’t many seats left when I arrived.

After the interval, we moved away from medieval mysticism, via Ben’s thrilling setting of the English Matins Responsory text, to the simple heart of the Christmas story – a newborn baby, and his mother singing a lullaby. Peter Warlock’s Bethlehem Down was sung with honest simplicity, and the world premiere performance of Dormi Jesu by Jeremy Dibble, radiated warmth. Dormi Jesus set a high solo soprano line against a soothing rising choral motif that gradually accrued harmonic colour as the piece developed.

The lullabies alternated with something darker: settings of the bleak Coventry Carol in which the mothers of Bethlehem mourn the children slain by Herod, sung first in its stark original version by three soloists and then in settings by Richard Allain and Kenneth Leighton. I particularly enjoyed Allain’s version, which took the original tune and wove it around a sobbing accompaniment to great effect. William Byrd’s Lullaby my sweet little baby also turns to this troubling part of the Christmas story, and the words seemed all the more chilling for the sweet simplicity of the singing.

The programme ended with a powerful performance of Leighton’s Hymn of the Nativity, a piece I didn’t know, but which I definitely needs to listen to some more. As an encore, we were given a beautifully poised performance of Whitacre’s Lux Aurumque. What really struck me this evening was not just the skill that Ben’s singers exhibit when they’re singing hard music, but the musicianship that they bring to the very simplest pieces, lifting them to another level. This was what made this concert such a lovely, soothing evening and just what I needed, coming as it did between two really busy weekends. Thank you Ben, and Renaissance.

1) There were several significant solos in this concert, but there were also many smaller solos. The soloists names weren’t given in the programme, and with the singers being spread around, I couldn’t always see who was doing what. Furthermore, the whole concert felt like such a collaborative effort that it seemed unfair to single out just one or two soloists when I couldn’t mention everyone.

2) A shorter version of this review appeared in the Northern Echo. I shouldn’t really review Renaissance beyond this website where I can clearly state my involvement. Gavin Engelbrecht, the Echo’s music critic, was planning to review but was unwell and so he asked me to help him out with a short review.

PrevPreviousMy pick of Christmas Concerts
NextSinging St MatthewNext
Music in Durham brings you classical music listings, previews, reviews and news for Durham, with a bit of random blogging thrown in. The concert listing pages bring together classical music events from across the City and the University, so whether you’re looking for a great concert to go to, or if you’re planning something and want to avoid clashes, this is the place to look.
Menu
Twitter Facebook-f Envelope