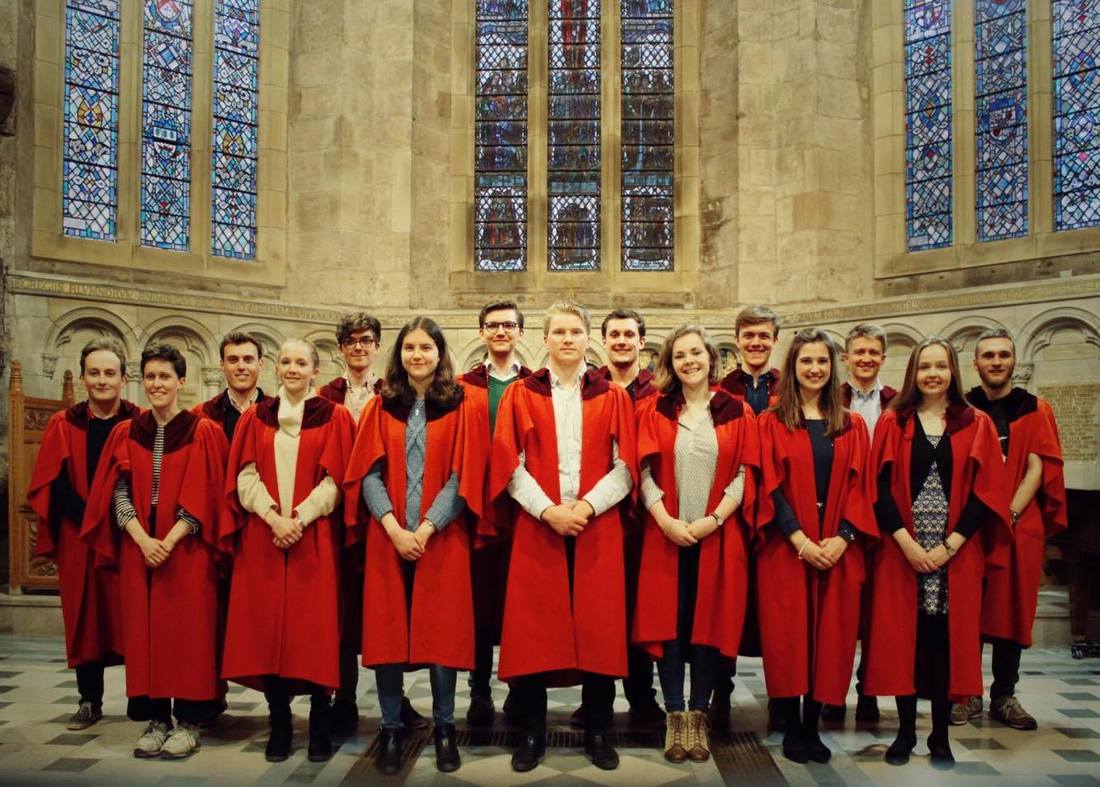 Way back in the mists of time, in my previous Durham life as an undergraduate, I once went to a concert in St Oswald’s Church by the St Andrew’s University Madrigal Group. It’s stuck in my mind as having been a particularly enjoyable evening, and so even though most of the current members probably weren’t even born then, the memory was enough to send me along to see them again when they visited Ushaw College on this year’s tour.

As their name suggests, the core repertoire of this concert was English madrigals, including classics such as the The Silver Swan by Orlando Gibbons, Thomas Morley’s Now is the month of maying, and Fair Phyllis. The Morley was enjoyably springy, and in Fair Phyllis, the consonants were tightly rhythmic, creating almost a drum-beat effect and ensuring that the music didn’t stray off into twee sentimentality. I was intrigued by the weightier Thule, the Period of Cosmography which turns out to have been by Weelkes – although conductor Edward Preston-Bell introduced the music, a bit more information about titles and composers would have been nice. It’s also clearly a tradition on this tour for one of the students to tell a tall tale about their university’s distinctive red gowns, and this year’s yarn about a duel between academics ending in bloodshed was obviously cooked up specially for the Durham audience.

After an opening set of spring-themed madrigals, the group turned to the Arctic winter for the first of four folk-song arrangements, a Canadian song Frozen in Frobisher Bay. From the first notes they created a chilling atmosphere of ice and stillness, particularly in the crystalline soprano lines; this was a magical piece. I wasn’t sure what the English song was, although it was a classically lush Edwardian arrangement, allowing the group to show off a richer tone, particularly the basses. I didn’t have any trouble identifying Loch Lomond though, in which the tenors were silky smooth, and the sopranos literally took the high road in a giddy descant. The last of the folk songs was, I think, James Macmillan’s Lassie wad ye loe me, with more high, bright singing from the sopranos, and beginning with a fluid and beautifully sustained soprano solo.

The sixteen singers ended their short recital with a set of modern sacred music, from John Tavener, Michael Tippett and Eric Whitacre. After a lot of pieces that highlighted the sopranos, it was lovely to hear the lower voices blooming in Tippett’s spirituals Deep River and Steal Away. In Steal Away, the choir made the most of the acoustics in St Cuthbert’s Chapel, giving big pauses so we could enjoy the ringing sound of trumpets. The tight discipline of their madrigal singing served them well in this repertoire, where perfect phrase endings and careful dynamics make all the difference: a piece like Whitacre’s Lux Aurumque can be pretty dull if it’s sung sloppily, but on this occasion it made for a radiantly calm ending to the concert.