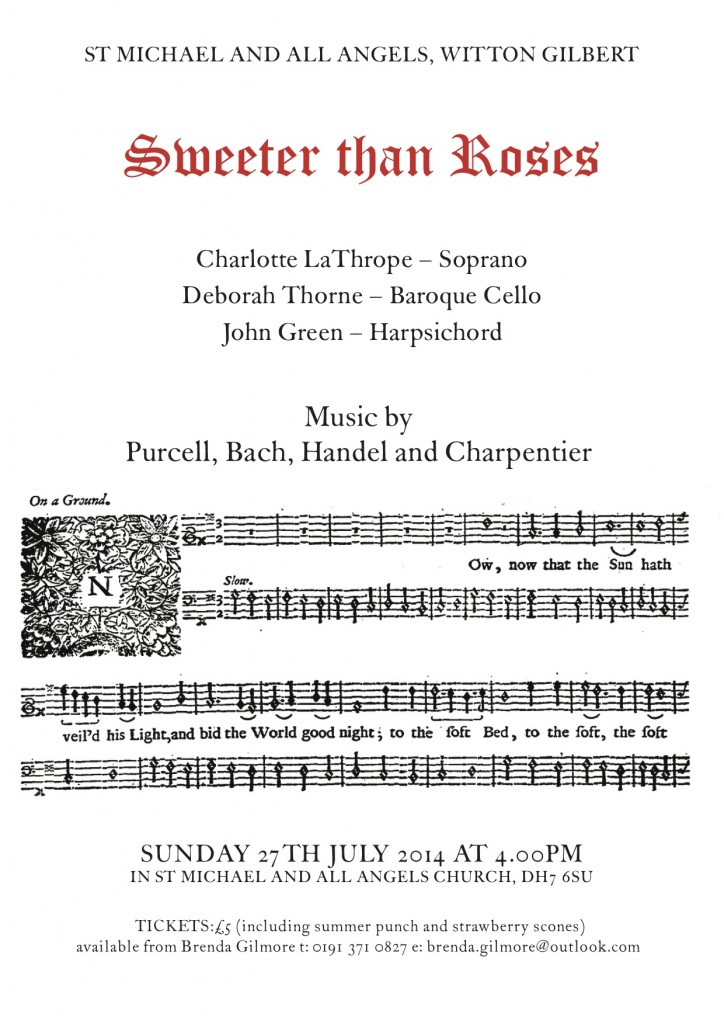 My idea of a perfect summer afternoon: sitting in a cool church listening to Baroque chamber music. Review of a concert by Charlotte La Thrope, Deborah Thorne and John Green. 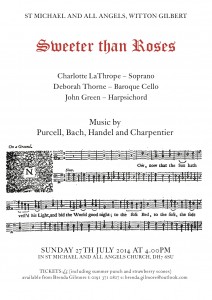 When summer kicks in, I listen to baroque music even more than ever; just as I wouldn’t eat a huge roast dinner in the heat, so I can’t really listen to big stodgy symphonies. My playlists turn to Handel cantatas, Italian concertos, Monteverdi’s songs: for me, the high drama of the baroque, and the blurring of the line between extremes of agony and ecstasy suit the mood of summer. I also like the idea of summer heat far more than the reality, so a concert of baroque chamber music that allowed me to escape from the sun into a cool church was pretty much my ideal way to spend a hot Sunday afternoon.

Soprano Charlotte La Thrope, cellist Deborah Thorne and harpsichordist John Green took us on a quick whizz around baroque Europe, beginning in England with Purcell, then to France, Germany and Italy.  The blessed Virgin’s expostulation by Purcell dropped us straight into the depths of Baroque passion: the song takes a text by Nahum Tate describing Mary when she has lost the 12-year old Jesus in the temple, and begs the Angel Gabriel to reappear and tell her where her son has gone, and the pleading and longing in Purcell’s music foretell the sufferings Mary will face later. Charlotte La Thrope’s performance was emotionally charged, but also tinged with radiance as she glided through Purcell’s elaborate runs. In the course of the afternoon, she sang in English, French, German and Italian and seemed equally at home in all four languages and musical styles, consistently conveying a strong sense of the text and delicately navigating the elaborate ornamentation of the two French arias by Lully and Charpentier.

Harpsichord music is popularly decried for being an incenssant jangle – (google Thomas Beecham’s famously bitchy description…) – but the combination of John Green’s sensitive playing, the warm tones of his instrument, and his choice of registration gave produced a clean, warm sound. I enjoyed too his occasional use of the dampening lute stop, particularly in the final section of Fairest Isle. Jean-Henri d’Anglebert was a harpsichordist at the court of Louis IX and his Suite in G Minor was a pretty much perfect example of the Baroque dance suite. John Green explained that the Prelude was written in unmeasured notation – a habit carried over from lute notation, in which the notes are simply written as semibreves, leaving the performer to decide on note values and tempi. This particular performance rippled gently along, before breaking into the more energetic Allemand and two Courantes both of which were given an infectiously strong rhythm. The other solo harpsichord piece in the programme, J.S. Bach’s E minor Toccata (BWV914), was intensely absorbing, John Green magically held my concentration all through the relentlessly long phrases.

D’Angelbert was new to me, as was Jean Barrière. Deborah Thorne explained that the viol held sway in France for far longer than it did in the rest of Europe, and so although Barrière was one of those who had made the change to the cello, he still looked back to the viol writing of earlier French composers in his music. I might not have detected it unaided, but after Deborah’s introduction, I could hear something of Jean Marais’s energy in the Allemande of Barrière’s Sonata No 2 in G minor. The whole of Barrière’s sonata was filled with elegant wit and I was utterly charmed by the final Aria grazioso.

The Italian section that closed the programme also reflected the cosmopolitan aspect of the Baroque. Francesco Geminiani was one of many Italian musicians to make his career in London, and although he mostly wrote violin music, he wrote some cello sonatas towards the end of his life. His A major sonata was graceful and sunny, bubbling with joy. Handel, the German who learnt his craft in Italy and made his home in England is perhaps the most multinational of baroque composers, but his canata E partirai, mia vita? that ended the concert is pure Italian. Charlotte La Thrope sang with greater power than we had previously heard, giving the arias a new richness, and the first recitative in particular was steeped in dramatic tension. A vigorous cello part in the second aria added extra enjoyment. I’m a big fan of Handel’s Italian cantatas, so I’m always delighted to see singers programming them instead of the same old opera arias.

The lovely atmosphere at this concert was enhanced by a warm welcome from the organisers at Witton Gilbert church, plus delicious scones and punch and by John Green kindly taking the trouble during the interval to demonstrate the construction and mechanism of his harpsichord.

My idea of a perfect summer afternoon: sitting in a cool church listening to Baroque chamber music. Review of a concert by Charlotte La Thrope, Deborah Thorne and John Green. 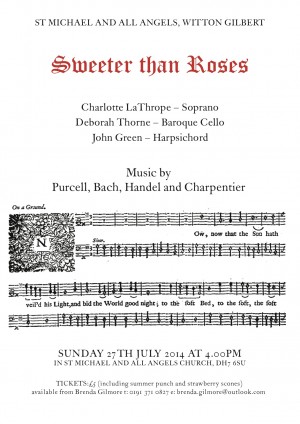 PrevPreviousNew twitter account
NextTell me the truth about loveNext
Music in Durham brings you classical music listings, previews, reviews and news for Durham, with a bit of random blogging thrown in. The concert listing pages bring together classical music events from across the City and the University, so whether you’re looking for a great concert to go to, or if you’re planning something and want to avoid clashes, this is the place to look.
Menu
Twitter Facebook-f Envelope