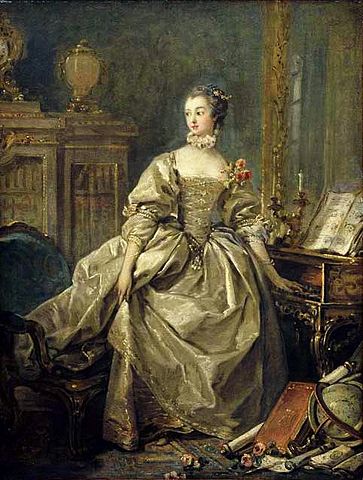 My recorder teacher has finally let me loose on some French baroque music, so here are a few musings on what I've learnt so far about battement and flattement.

More ornaments than my grandma’s mantelpiece

Ever since I went back to having recorder lessons four years ago, my teacher has dangled French baroque music in front of me, as a treat to come and a few weeks ago, I was finally let loose in this strange new world. The French repertoire for recorder isn’t so well-known as that of England, Germany or Italy: there are no big solo pieces to compare with Vivaldi’s concertos, the Brandenburgs or the sonatas by Handel or Telemann, but the flexibility of baroque instrumentation means that there are plenty of sonatas and dance suites that work just as well on recorder as on oboe, flute or violin, and I began with a Hotteterre suite, the second from the Pièces pour la flûte traversiere, livre II, Op.5 (originally in C minor but transposed to E minor for recorder).

Obviously learning one Hotteterre suite doesn’t make me in the least bit qualified to contribute anything meaningful about French baroque style, but I thought I’d write a bit about what I’ve learnt and discovered so far – and if it’s remotely helpful to any other newcomers, then that’s good.

When I began, I was slightly panicked by all this, and my first instinct was to start by just fixing the tunes without any ornaments. This didn’t always work though, because the ornaments are so indelibly part of the melody line that it often made no musical sense to miss them out, and in fact, once I started to get used to the notation and style I found that in many cases, the ornaments started to flow in naturally. So my approach now is to try always to play at least the first note of any ornament, and gradually build them up, particularly those cases where there are several ornaments all thrown together on one note.  The next step was to take the ornaments apart, adding a bit more each time, and sometimes even writing them out on a scrap of paper just to figure it out. It’s very easy just to slip into turning everything into a trill, and part of the challenge has been to control my fingers to do what is written, and nothing more, whilst shaping the ornaments and giving careful thought to the light and shade.

As well as the written ornaments, there’s also a delightful technique called “flattement” or “finger vibrato” in which you bend the note downwards very slightly by partially covering a lower hole. Like normal vibrato you can do it at any speed, using it to create expression and shape on long notes. I love the sound of it, and I’ve had a lot of fun experimenting with it, but it’s definitely my biggest weakness: my flattement is mostly purely technical and lacking in elegance. And elegance is what it all comes down to in the end: everything must flow gracefully and stylishly, with no vagueness, and not even the tiniest note out of place.  I still have a long way to go, but as I worked through the Hotteterre, I started to find that the ornaments were starting to drop in even when I was sightreading, and this week when I looked at ornamenting a very French movement in a Telemann fantasia I found myself instinctively putting in some of what I’d learnt.

Stepping away from the ornamentation to the bigger picture, we also get the question of inégale – basically adding a bit of swing, and it really helps. Again there are rules: you only do it on the shortest length note in a piece (i.e. usually the quavers or semi-quavers) and they have to be moving stepwise, and, I’m told, you must also to have long scholarly debates with your fellow performers about the exact ratio of the swing. But once you’ve decided you’re going to play a piece inégale then the underlying rhythm informs the whole piece, not just the swung notes themselves, and in a couple of cases with the Hotteterre, the sarabande and one of the minuets, for example, the music made a lot more sense when I started to think about the swing.

It’s all about dance of course, and for me is the beauty of playing baroque music. I absolutely cannot dance; I was thrown out of childhood ballet classes for being too rubbish. But I can strive to that poise, grace and self-control in music instead.

My recorder teacher has finally let me loose on some French baroque music, so here are a few musings on what I've learnt so far about battement and flattement.

PrevPreviousDurham Vocal Festival
NextDULOG SpamalotNext
Music in Durham brings you classical music listings, previews, reviews and news for Durham, with a bit of random blogging thrown in. The concert listing pages bring together classical music events from across the City and the University, so whether you’re looking for a great concert to go to, or if you’re planning something and want to avoid clashes, this is the place to look.
Menu
Twitter Facebook-f Envelope