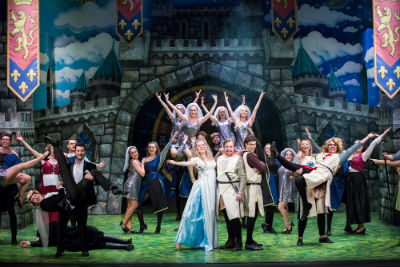 If you’re feeling in the dumps, forget about the Trumps… and Brexit and the January blues and get to the Gala to see DULOG’s Spamalot. OK so that’s not quite how the song goes, but it might as well be, because this gloriously silly show was a great tonic.

Spamalot is based on the film “Monty Python and the Holy Grail”, with all the jokes plus song and dance numbers, with the film-within-a-film conceit of the original being suitably adapted for the stage. The set calls for castles, a forest, a large wooden rabbit, a small killer rabbit, an armless knight, a shrubbery and coconuts as well as a large chorus and orchestra and countless costume changes and DULOG had spared no effort to get it all in.

The ensemble flung themselves into every song and dance routine with unflagging enthusiasm and evident enjoyment. I can’t comment on the technical parts of the dancing, but it was all very elaborate and a lot of fun to watch, The ironically titled ‘You won’t succeed on Broadway’ with its array of dance and musical styles came off very well, as did ‘I am not dead yet’ – I loved Rory McNeilage’s dance moves in the part of Not Dead Fred.

The spoken dialogue crackled, particularly in the scenes with Charlie Keable’s amiable King Arthur and the ensemble scenes with the knights. The spirit of the original Pythons was there, notably in the male cross-dressing parts, but without being slavishly copied. My favourite scene in the movie is definitely the killer bunny rabbit, and this one didn’t disappoint. Rory McNeilage making a second appearance was very funny as the deadpan Brother Maynard reading the lesson, and huge credit goes to whoever was responsible for the bunny puppet’s deadpan gestures during the reading. The technical effects of this scene were slickly done, as they were too in the fight with the Black Knight.

The Lady of the Lake role makes fun of Broadway divas and Rosie Weston was excellent. As befits a diva, it is undoubtedly the most vocally demanding part in the show, and she carried it off with style and great good humour, with strong and flexible singing, especially in her solo spot ‘Whatever happened to my part?’. There was good singing from all the Knights too; Arthur Lewis as Sir Lancelot, Will Emery as Prince Herbert and Alex Bromwich as the cowardly Sir Robin were all enjoyable to listen to. Arthur Lewis also had some seriously cool dance moves, but to say too much more would be a bit of a spoiler. Just go and see it.

An orchestra of just under thirty musicians provided exuberant support – the brass were particularly good with their cartoon interjections and sound effects. In one of the quieter moments of a fairly noisy production, Ellie Knott’s flute solo for ‘Brave Sir Robin’ was sweetly mocking. There were one or two problems with the overall sound production though, which led to the actors being a bit over-amplified in the chorus and in one or two of the spoken parts, although as things improved through the evening, so it may have been first-night teething problems.

The hero of the show turns out to be the unassuming Patsy, played by George Rexstrew, but well before his contribution to the plot is uncovered, he’d already made a splash with the Pythons’ most famous song, “Always look on the bright side of life”. He made it entirely his own, swinging it along in full voice with plenty of flair; I think I enjoyed this performance more than the original recording. A reprise at the end by the full cast with audience participation made sure everyone remembered to go home happy; I’m sure I wasn’t the only person walking back through town humming. The entire DULOG team are to be congratulated for pulling off a hugely complex show with such a massive sense of fun.

PrevPreviousAdventures in French baroque
NextDurham Vocal Festival: NYCGB Fellowship OctetNext
Music in Durham brings you classical music listings, previews, reviews and news for Durham, with a bit of random blogging thrown in. The concert listing pages bring together classical music events from across the City and the University, so whether you’re looking for a great concert to go to, or if you’re planning something and want to avoid clashes, this is the place to look.
Menu
Twitter Facebook-f Envelope