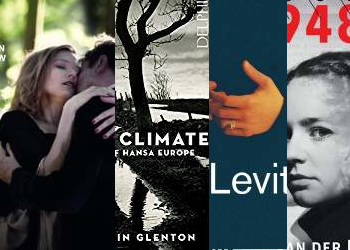 My thoughts on some of the new recordings that I've really enjoyed in 2018. (Clickbait: some of my choices may surprise you).

For me, 2018 has been a particularly good year for new recordings, particularly for things beyond my habitual early music and choral repertoire. These four albums have all made a great impression on me: they’re the ones that have been on repeat on my i-Pod, that I’ve raved about to friends, bought as gifts and generally obsessed over. Even better, they’re the ones that have let my imagination take flight far away from the present day (and right now, who can object to that!). If you don’t know any of these, I hope you try them and that you’ll enjoy them as much as I do.

I’ve included links to Presto Classical’s website for each one. I have no affiliation with Presto – they’re just my default choice for sheet and recorded music, and their site is excellent for comparing recordings and getting background information.

Music in a Cold Climate: Sounds of Hansa Europe
In Echo

I was attracted to this disc by the involvement of cornett player Gawain Glenton – it appeared not long after he reduced me to tears with his playing in our Durham Singers Monteverdi Vespers. He directs and plays in the new ensemble In Echo, alongside other early music soloists: the combination of cornett, viol, violin, sackbut and organ makes for plenty of textural variety on this album. The music draws on the cultural links between the cities of the great Hanseatic trade league that stretched across Northern Europe and the Baltic sea, with 16th and 17th century music by composers who worked beyond their own places of origin. There’s also a new commission by Andrew Keeling for the ensemble, “Northern Soul” which manages to capture the unique sounds of these old instruments whilst still feeling fresh and modern.

What I love about this album is that it is full of the comfort of winter treats — fires, blankets, tasty stew — but there are blasts of icy cold melancholy too, reminding me that however warm and cosy winter evenings can be, it’s still dark and bleak outside. Keeling’s piece,“Northern Soul”, however, drags you outside into fresh air, for a bracing winter walk through frost and mists.

My next album is a world away from those straightforward Germanic traders. Soprano Barbara Hannigan and pianist Reinbert De Leeuw plunge us headlong into the last gasps of Habsburg Vienna, a decadent world that is pushing at the limits and slowly destroying itself. What’s particularly fascinating about this album is that it features, among others, the three composers whose names became forever associated with the coming musical revolution: Arnold Schönberg, Anton Webern and Alban Berg. We hear them here in early works, where they’re stretching tonality to breaking point, but not yet finding a way beyond its constraints. Everything shimmers with an unwholesome beauty, with Barbara Hannigan’s sublime voice writhing seductively around the text and the musical line. Every word, every note, drips with a dangerous passion: it’s the seductiveness of Salomé’s dance distilled into the intensity of the Lieder format. It’s probably not healthy but it’s absolutely delicious: it reminds me of C.S. Lewis’s beautiful and sensual witches in the Narnia books.

The second half of the album feels more straightforwardly romantic, with sumptuous songs by Alexander von Zemlinsky, Alma Mahler and Hugo Wolf whose settings of Goethe’s Mignon poems link everything on this album firmly into the Lieder tradition. Alma Mahler’s songs in particular are a treat.

I was very proud of myself in 2012 for picking Laura van der Heijden as the eventual winner of BBC Young Musician of the Year right from the very first piece she played in the category finals. Everything she did, even back then when she was just 15, suggested a musical intelligence and maturity far beyond her years, and her career since her win reflects that too: no doubt she had plenty of invitations to play famous pieces at high profile events, but instead she’s quietly continued with her studies and almost disappeared from view, only to re-emerge now with a debut album exploring little-known repertoire from Soviet Russia.

Laura van der Heijden has spoken about her love of Russian music and culture – clearly not someone to do things by she’s been learning the language too. You can sense her thoughtfulness and understanding in the way she plays on this album, and also a deep affinity for the music in the way she sings effortlessly through the melodies. The first piece, a Prokofiev sonata begins with all the resonance of a great Russian bass, right in the depths of the cello range, but it’s pieces by the less-known composers that are the real joy here; Yuri Shaporin’s playful “Five Pieces for cello” and the swooning romanticism of the pieces by Miaskovsky and Liadov.

If those who know me find it surprising that I’ve included an album consisting mostly of piano transcriptions among my favourites from last year – well, I surprised myself. I saw people raving about it on Twitter, and something prompted me to try it. (For those who disapprove of Spotify, this is a wonderful example of how useful it can be as a marketing tool, because I’d never have bought the album if I hadn’t had the chance to listen to it first). From first listen, I was absolutely transfixed. The album is a homage to a close friend of Levit who was killed in an accident, and in putting together a set of transcriptions and arrangements, Levit’s explores the way in which music, like life reinvents itself, and continues in surprising new ways. One of the pieces, for example, is Brahms’s arrangement for left-hand of the Chaconne from Bach’s 2nd violin partita: instead of the fierce intensity that the violinists extract from it, Levit turns it into a gentle musing, that feels like an improvisation.

Liszt’s arrangement of the “Solemn March to the Holy Grail” from Wagner’s Parsifal seems to bask in a holy light. The choice of music and Levit’s playing are simultaneously heartbreaking and radiant: quite simply, when I listen to it, it reminds me that I’m human and alive and makes me glad of that. Bill Evans’s “Peace Piece” at the end brings everything gently back into equilibrium: a chance to take a deep breath and return to the world.

My thoughts on some of the new recordings that I've really enjoyed in 2018. (Clickbait: some of my choices may surprise you).

PrevPreviousDurham Singers: Bach Christmas Oratorio
NextThe EXAUDI Italian Madrigal BookNext
Music in Durham brings you classical music listings, previews, reviews and news for Durham, with a bit of random blogging thrown in. The concert listing pages bring together classical music events from across the City and the University, so whether you’re looking for a great concert to go to, or if you’re planning something and want to avoid clashes, this is the place to look.
Menu
Twitter Facebook-f Envelope