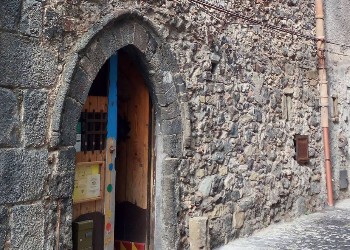 Whilst on holiday in Sicily, I visited the wonderful Casa della Musica in Randazzo, museum and workshop of early music specialist Giuseppe Serverini.

When my family and I were planning our recent holiday in Sicily, we were looking for somewhere on the slopes of Etna for a few days, so that my husband and son could go and do scary walks over bleak volcanic wastelands, and we picked Randazzo almost at random. It’s the highest major town on the mountain, and is notable for its shiny black basalt pavements and buildings. What I didn’t expect when I was searching for something to do while the chaps were doing their volcanic wastelands was a medieval music workshop.

Casa della Musica is the home and workshop of luthier and early music specialist Giuseppe Severini. He builds instruments and gives talks and workshops to general visitors and to school parties. There weren’t enough visitors in Randazzo at this time of year for a full group tour, but Giuseppe kindly gave me an individual visit, and I spent a fascinating hour learning about instruments from the most primitive horns and flutes through to reconstructions of complex medieval string instruments, and an introduction to the idea of the universe as a musical instrument.

We began with the most basic instruments imaginable: an animal horn and conch-shells with simple holes cut for blowing like a trumpet, and sweet-toned flutes carved from bone. Giuseppe let me try them out – I didn’t fare too well with the animal horn, but I managed to get several pitches out of the conch-shell, and was fascinated to see how you can further adjust the pitch by moving a hand in the end of the shell, just like french horn players do. The bone flutes were surprisingly tricky, requiring just the right amount of breath pressure to get a pure tone. There were also a couple of simple reed flutes: one played directly on the reed, and the other with a cap over the reed, like a crumhorn. The reeds were all of one piece, just a thin cane with a very precisely cut slit to create the vibrating part: I was quite cautious about trying these as they looked very delicate.

Moving on to string instruments, Giuseppe showed me his copy of an ancient Greek kithara (lyre), guitars made from tortoise shells and a beautifully decorated oud, the middle-Eastern lute. He clearly had a close affinity with each instrument; his demonstrations were all lovely free-flowing improvisations, just a few bars, but enough that I could easily imagine each instrument in its natural home. We talked about early fiddle players making the transition from playing their instruments upright, like viols, to tucking them under the chin to create greater dramatic effect and volume when playing outdoors in the streets. The loveliest instrument for me though was the bowed 3-string lirone, with its melancholic, plangent tone .

A lot of Giuseppe’s research on medieval string instruments is based on pictures from churches and cathedrals, and I was interested to learn that the Twenty-four Elders in the Apocalypse are often depicted playing instruments. One of the strangest instruments in Giuseppe’s collection is the two-player organistrum, a variation on the hurdy-gurdy, with a second player operating a series of pegs on the strings that allow two strings to sound at a time, giving the ability to play basic polyphony. Giuseppe built his instrument based on a depiction in the extravagant carvings that adorn the west door of the cathedral in Santiago de Compostela and although I wasn’t able to hear it played, he has a video:

And finally: the universe. The idea of the “Music of the spheres” originated with Pythagoras and other Greek philosophers, with each heavenly body contributing their own pitch to the heavenly song. Giuseppe illustrates the concept with an illustration of the medieval cosmos on a large wooden board, with strings stretched across it to represent each part of the universe. The stars around the outside are at the lowest pitch. Closest to earth, the moon is pitched an octave higher, with the sun and the planets filling in the scale. The earth, at the centre is silent and dark: our sinful, marred planet can only reflect the light and sound of the heavens around us. Even after Copernicus had revealed our true place in the universe, the astronomer Kepler adapted the idea of cosmic music, creating melodic fragments to match the shape of each planet’s orbit around the sun. My fascinating visit to Giuseppe’s workshop concluded in a most unexpected place as we discussed recent research by astronomers into the ‘pitch’ at which a black hole vibrates: a universe away from those prehistoric bone flutes.

There’s lots more to see and hear on Giuseppe’s website at www.secolibui.com and if you’re visiting the Etna area, do be sure to pay him a visit.

Whilst on holiday in Sicily, I visited the wonderful Casa della Musica in Randazzo, museum and workshop of early music specialist Giuseppe Serverini.

PrevPreviousThe Bishop’s Consort: A Glorious St John Passion
NextDurham Cathedral choir at UshawNext
Music in Durham brings you classical music listings, previews, reviews and news for Durham, with a bit of random blogging thrown in. The concert listing pages bring together classical music events from across the City and the University, so whether you’re looking for a great concert to go to, or if you’re planning something and want to avoid clashes, this is the place to look.
Menu
Twitter Facebook-f Envelope