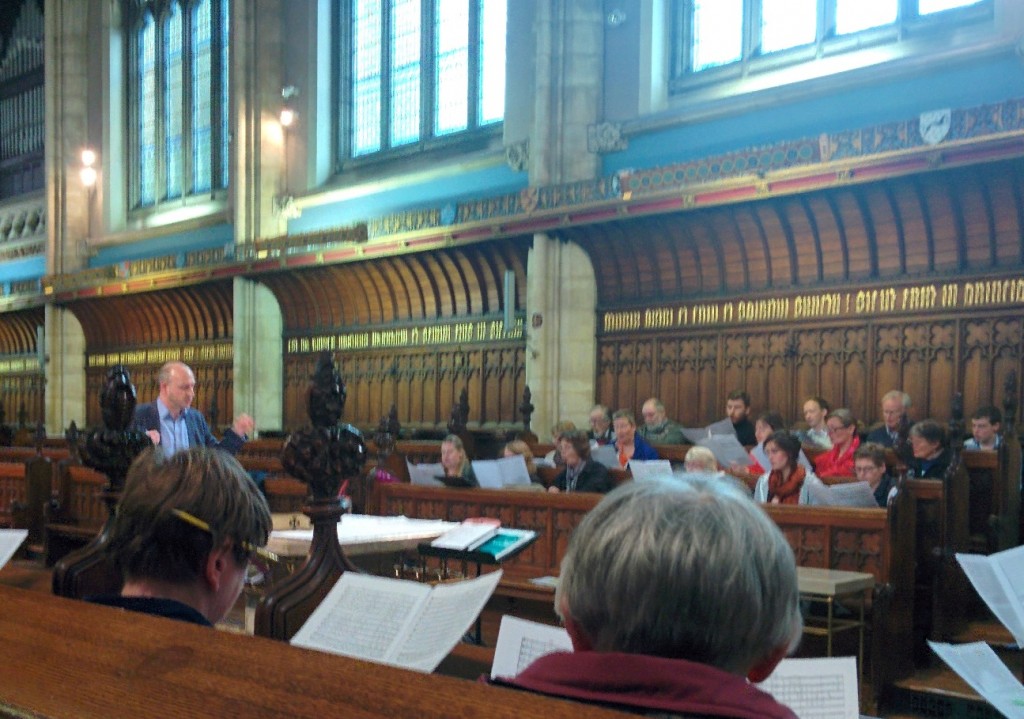 My overwhelming experience of singing Thomas Tallis's Spem in Alium for the first time, in a workshop with Oxford's Schola Cantorum, led by James Burton

My non-singing friends may have been baffled by some of my facebook and twitter updates over the last couple of days about something called Spem. There was mounting fear, which I attempted to alleviate by poor puns, and then later on Saturday, triumph and ecstasy. The cause of all this fuss? A piece of music for unaccompanied voices, lasting about 10 minutes, and composed in 1570 for Queen Elizabeth I by Thomas Tallis. Oh and it’s in forty parts. Yes, forty different parts, divided into eight choirs of five, weaving together, waves of sound building up and subsiding, from the single alto of the first note, right up to all forty parts ringing out together in a mass of glorious sound.

Spem in Alium, to give it its full title, is of those pieces that everyone wants to have a go at singing, but it poses significant musical and logistical challenges, so any chance is eagerly seized upon. For me, and a number of my friends, that chance finally came this weekend, thanks to a workshop organised for the Durham Singers and Capella Novocastriensis by Schola Cantorum of Oxford who were passing through Durham on their way to Edinburgh and wanted to do something en route.

I had the music about a week beforehand, and worked myself into a state of terror by attempting to follow it whilst listening along to my recording. It’s a pointless exercise – you’d need to have a better ear than mine to pick out the choir six alto part, mostly buried in the middle of all that texture and – and all that happened was that I turned up at Ushaw on Saturday convinced that I was going to fail horribly and that I would never even be listen to the piece again.

After leading some wonderful rigorous physical warm ups, Schola’s conductor, James Burton got us into the right mental state for Spem by getting us all to conduct a clear, solid four beats, whilst having a conversation with our neighbours. Then, to my great astonishment, with no further ado, he set us straight off, from the beginning to run the whole thing. And gloriously, miraculously, it worked. Over the far side of the chapel, the familiar opening rose from the choir one sopranos and altos, and by the time choirs three and four had joined in, before I had even sung a note, I was already overcome with emotion at being part of this magnificent musical architecture, so much so that I had to force myself to keep concentrating and counting. There were few slips and tumbles along the way, but I more or less made it to the end without getting lost and it was all I could not to let out a triumphant yell of victory after the last chord.

That first run seemed to give everyone a massive boost of adrenaline, ready for James to work on some of the details. Obviously it wasn’t the occasion for any musical cleaning behind the fridge, but just a bit of surface polishing on a few carefully chosen parts made all the difference, and looking back at it now, it seems that everything he did was carefully chosen to give us all more confidence in singing the whole thing. We did some good rhythmic work on the last section, unleashing our human drum kit to get the pulse going, and what we’d learnt here on a relatively easy passage carried over into the rest of the piece. Singing the last couple of pages a few times also ensured that whatever might happen in the middle, we’d be able to pull together a good, solid ending. He also encouraged us all to take ownership of our entries by getting us to try and attract his attention instead of waiting to be given our leads: as an experiment he closed his score and said he would try to work out where the leads were from watching us. (So OK, I tried too hard and ended up coming in a beat early on my first entry). And above all, he was so full of energy and good humour that it was all great fun.

We finished the day with a short concert that began with Schola Cantorum singing some of their repertoire to us. They sounded wonderful, and after so much work on Spem, I found their performance of Tallis’s Misere Nostri almost unbearably moving. I also really enjoyed hearing them Roderick Williams’s anthem Love bade me welcome and James Burton’s own Magnificat setting. Then we joined them for one last time to perform Spem in Alium and I spent the rest of the day walking on air. I had sung Spem, I hadn’t got lost and I had enjoyed it more than I ever thought possible.

CPDL Spem in Alium score page: we used the incredibly useful and sensible part books created by Philip Legge. Not only are they physically easier to manage, the reductions of the other parts gave us just enough information to help us do things like count rests without being a distraction.

My overwhelming experience of singing Thomas Tallis's Spem in Alium for the first time, in a workshop with Oxford's Schola Cantorum, led by James Burton 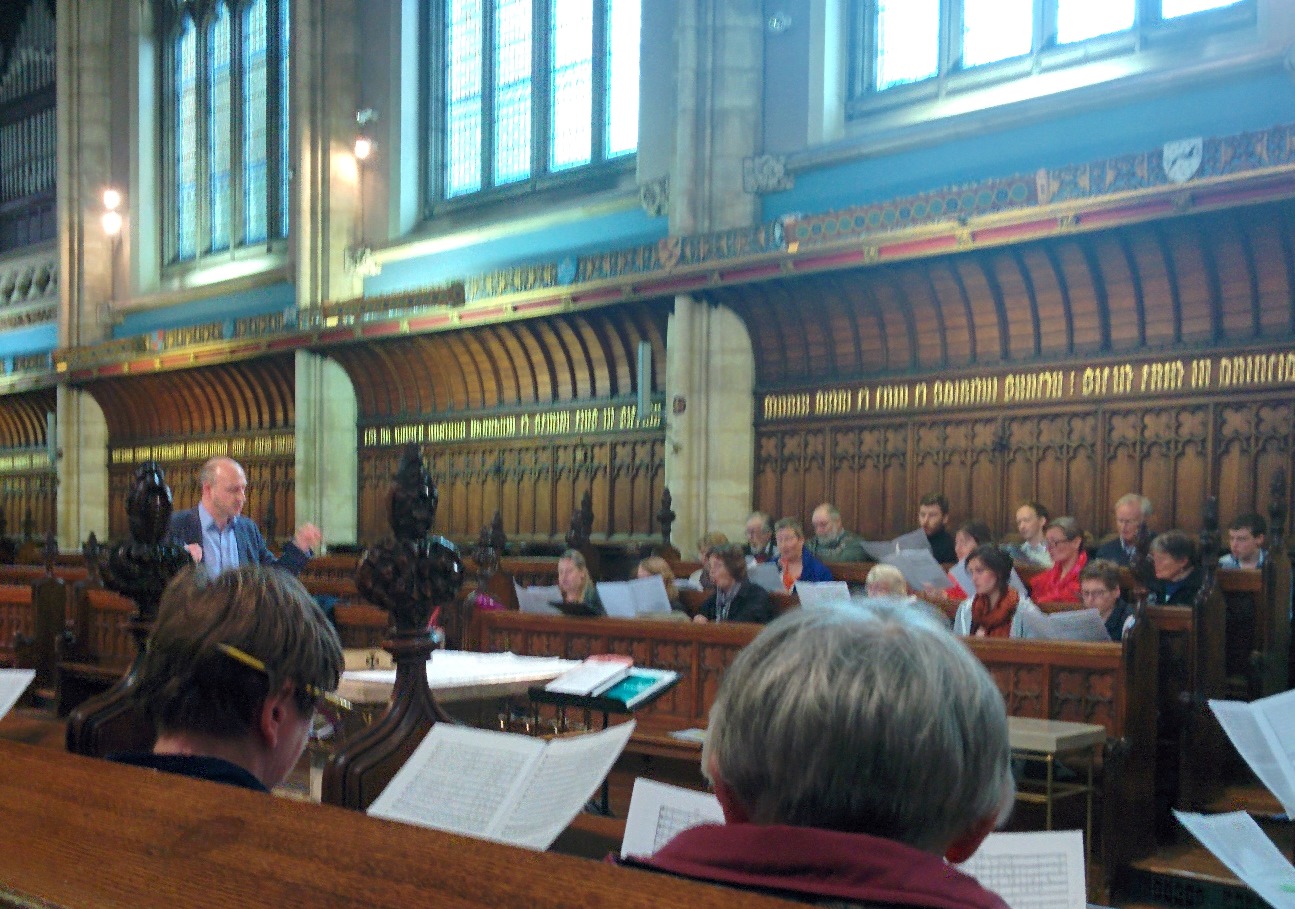 PrevPreviousNorthern Spirit Singers: Cantus Mundi
NextRenaissance: LamentaNext
Music in Durham brings you classical music listings, previews, reviews and news for Durham, with a bit of random blogging thrown in. The concert listing pages bring together classical music events from across the City and the University, so whether you’re looking for a great concert to go to, or if you’re planning something and want to avoid clashes, this is the place to look.
Menu
Twitter Facebook-f Envelope