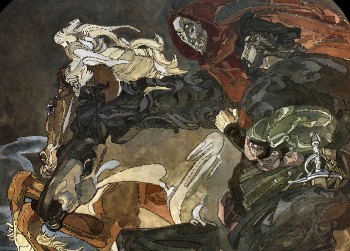 After too long basically ignoring Berlioz, I decided I should go on the rollercoaster journey with Faust and Mephistopheles.

The libretto is online here at Naxos

I’ve never really got my head around Berlioz, and I think I’ve too often written him off as a cheap purveyor of gothic horror, basing my judgement solely on the last two movements of the Symphonie Fantastique. And I loathe the ‘Shepherd’s Farewell’, which until last year, I had successfully avoided singing since my teens. However, it seems a bit unfair to write off a composer based on five minutes of Christmas cheesiness, and I do remember that I rather enjoyed Les nuits d’été when I heard it a few years ago, so I thought he’d be a good candidate for this project. And I picked La Damnation de Faust because I’ve never really quite got to grips with Goethe either, so this seems like a good chance to kill two birds with one stone. The closest I’ve come to Faust really is in singing Mahler’s Eighth symphony and I was quite taken with all the mad mysticism at the end, so I’m hoping there’ll be some more of that.

Very little, and I’m reluctant to read up too much on it before I plunge in, so I’ll do that after a first listen. But I’m expecting something a bit odd and very colourful that will transport me into the strange recesses of Berlioz’ imagination.

Berlioz called it a légende dramatique, dodging the question of whether it’s an opera or a concert work, after realising himself that it was far too complicated to work as an opera. It seems to have settled as being mostly a concert piece that’s sometimes staged. I often enjoy dramatic works in concert form – it’s like reading the book instead of watching the film – you can let things unfold in your own mind.

This piece is absolutely bonkers and I’m not entirely sure where to start with my impressions of it. It manages by turns to be moving, beautiful, cinematic and silly, and it teems with life – we meet dancing peasants, soldiers, a church procession, a crowded pub and streets full of rowdy students, and all this liveliness draws our attention to Faust’s own detachment from the world. Listening to it in our current locked down world, I felt an unexpected sympathy with Faust, alienated as we are from those shared human activities that Berlioz depicts with such bright colours.

What it really showed me is just how good Berlioz is when he’s being seriously expressive. The opening scene in the countryside, beginning with luscious violas, is rich and expansive. We also get to see immediately just how imaginative Berlioz’s orchestration is, with brilliant splashes of wind adding more colour to the bold brushstrokes of strings. It turns out that this first, sunlit scene, is just a foretaste of what comes later in Faust’s invocation to nature. In the first scene, there’s an innocence to Faust’s lonely wanderings, but he returns to nature as a broken and troubled man, seeking solace and his desperation pours out of every note. At the end of this aria, he sings about having ‘a heart too vast’ and this line seems as if it could be a subtitle for the whole work.

It’s said that the devil gets all the best tunes, and Berlioz gives Mephistopheles a good one to add to his collection with Voici des roses, in which, accompanied by a sumptuous trip of trombones, he hypnotises Faust, putting him into an enchanted sleep in which he will dream of Margarita. It’s like the White Witch’s turkish delight in Narnia: you know it can’t possibly be good, but it’s just impossible to resist.

The counterpoint to all this decadence is Margarita herself. Before she finds Faust hiding in her room, she distracts herself from her own troubling nighttime visions by singing a lovely, dreamy song about the medieval legend of the faithful King of Thule, while she plaits her hair – a pre-raphaelite painting set to music. Berlioz clearly enjoys writing in the middle of the musical spectrum – Margarita herself is a mezzo, she is accompanied in this aria by a solo viola, and later in her aria ‘D’amour l’ardente flamme’, in which she describes how she is consumed with love for Faust, she’s joined by a cor anglais. ‘D’amour l’ardente flamme’ is a set-piece of passion, with a sighing vocal line and a throbbing heart in the accompanying strings.

In contrast to all this passion, we get the other side of romanticism – wild scenes painted in glorious technicolor, culminating in the maelstrom of Mephistopheles and Faust’s wild ride to hell, accompanied by an incessant gallop in the strings that grows in intensity, punctuated by bass brass, mowing down everything in sight until they arrive in hell to be greeted by a demonic chorus and screams of brass and percussion. The ride itself teeters dangerously on the edge of sounding like music for a cartoon chase, and the chorus in hell is really a bit silly, but I bet it must be great to sing. For the final scene we switch to Margarita, forgiven and installed in heaven, but there’s none of the sublime mysticism of Mahler’s version, just pretty clouds and cherubs, with an extravagant six harps, and children’s chorus, which felt like a bit of an anticlimax to me.

I have to confess to having a light bulb moment during the pub scene where Mephistopheles enjoys himself poking fun at the drinkers – I was thinking that he is a lot like Woland, the mischievous devil who causes chaos in Bulgakov’s great novel ‘The Master and Margarita’, and then of course it dawned on me why the heroine is called Margarita and why there’s a character called Berlioz in the story. (I should probably have known this back when I was studying the book, but it was a long time ago and the Faust connections may not have made much sense at the time).

After listening to it once on Idagio, I thought that would probably be enough, but then I noticed there was a Radio 3 concert broadcast of a performance by Simon Rattle and the LSO, so I ended up listening to that too, and I listened to a few extracts again while writing this.

The strangeness of it softened as I listened again, which I suppose is only to be expected, but it also starts to make a bit more sense when you know how it all fits together: on the second hearing, for example, I was struck how fresh and innocent the opening scenes feel, now that we know what’s coming. I also found that I became more forgiving of the sillier bits, as I learned to let go and just let my imagination take over. I agree that it’s a piece for the concert platform, not the opera stage, because no staging could really replace the imagination here – although I did start thinking that it would be rather fun to stage it in the 1930s Moscow of The Master and Margarita.

I don’t feel a need to own this, but I’m really glad that I’ve finally got to know it. And I would absolutely love to see it performed live so that I can allow myself get completely swept away by it all.

After too long basically ignoring Berlioz, I decided I should go on the rollercoaster journey with Faust and Mephistopheles.

PrevPreviousVaughan Williams, Symphony No.3
NextHaydn Op76 string quartetsNext
Music in Durham brings you classical music listings, previews, reviews and news for Durham, with a bit of random blogging thrown in. The concert listing pages bring together classical music events from across the City and the University, so whether you’re looking for a great concert to go to, or if you’re planning something and want to avoid clashes, this is the place to look.
Menu
Twitter Facebook-f Envelope