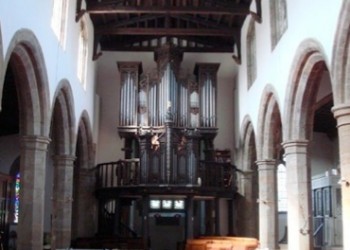 St Oswald's church are launching a campaign to restore their organ. David Harris, Director of Music at the church, told me more about this unusual organ and why its restoration will pay tribute to the vision of the people who designed and built it.

When you walk into St Oswald’s church in Durham, one of the first things you’ll see is the organ. In its elegant gallery at the west end of the church, with an elaborately carved case and pretty decorated pipes, it looks as if it has been nestling comfortably there for centuries, but it’s actually only about 30 years old. I talked to David Harris, the current Director of Music at St Oswald’s, about why this instrument is so unusual, and why the church is launching a campaign to restore it to the glories that its designers intended.

St Oswald’s has a long and distinguished history of music-making: one of the former vicars was the hymn-writer J.B. Dykes, and a more recent organist, David Higgins left the church a significant musical legacy through his composing – the choir sing a mass setting by him most Sundays – and in the organ itself. When a fire completely destroyed the old organ in 1984, David Higgins and the vicar of the time, Ben de la Mare, decided to create something completely new. Working with the organ builder Peter Collins, Higgins designed an instrument that represented a unique artistic vision, and that is nothing like any of the other organs in Durham City. 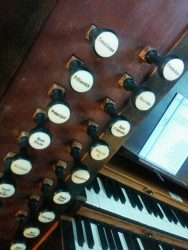 The organ that Peter Collins built for St Oswald’s was designed primarily with the music of French and German baroque composers in mind. An organ’s distinctive character comes from the designer’s choice of which stops (effectively, the different sounds it makes) to include in the instrument, and one of the skills that an organist needs to learn is how to combine the different stops to create the most appropriate blend of sounds for the instrument, the piece being played and the building. The St Oswald’s organ has stops that allow the player to create a characteristic baroque sound: for those who know about the technicalities, David Harris explained that the St Oswald’s vox humana is very effective as a foundation stop in French baroque repertoire or as a solo in chorale preludes; the great diapason chorus is sweet and light and more English; and the great mixture can be added to this to create a bigger North European sound. However, because the organ wasn’t built in the seventeenth century, its designers were also able to take the requirements of later musical styles into account, so with an imaginative organist, the instrument can be effective in the romantic and modern repertoire – as David put it, “you can have your cake and eat it”.

For organists, the first unusual thing that they’ll notice, before they even start looking at stops, is the instrument’s actual mechanism. These days, most organs are electrically powered: when you press a key or pull out at stop, you’re effectively operating a switch that opens the airways for the chosen pipes. Unusually for an instrument built so recently, the organ at St Oswald’s has only two electrical elements: the blower and the lights. Everything else is done mechanically. This mechanical action adds to the authenticity of the organ in older repertoire, and contributes to the instrument’s distinctive character. David explained that once you get used to it, it allows the performer a lot of sensitivity in shading and subtlety: instead of a simple on/off key press, you can use different figure pressure or vary the degree of attack for a wider expressive range. It’s also a good instrument for teaching, as the manual action is very revealing of poor technique and there’s nowhere to hide. 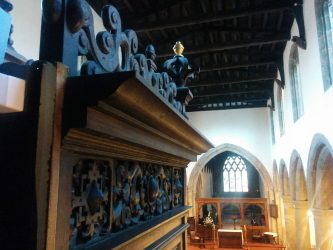 The old organ was in the standard English parish church position, behind the choir stalls in the north aisle. The position of the organ now, in a gallery at the west end of the church, with one set of pipes (the choir) immediately behind the organist’s back is typical of Northern European church layouts. Having the organ behind the congregation, with the sound coming evenly up the nave really helps the instrument to do its principal job of supporting the congregational hymn singing and its location is an important reflection of how the community of St Oswald’s have thought about the role of music in their liturgy. The strong legacy of congregational music at St Oswald’s also contributes to the organ’s usefulness as a teaching instrument: the church’s annual organ scholarship gives young organists the opportunity to develop the skills required for a parish church musician, and provides a very different experience to what is offered in the college choirs or the cathedral.

The question that springs immediately to mind is “why does the church need to raise a six-figure sum to restore an organ that’s only 30 years old?”  David explained that there are good practical and musical reasons why the organ needs such major work. At a fundamental level, the organ had to be built quickly and fitted into a small space, and so parts of it were built into the case without any means of access. This means that some of the organ has never been cleaned or maintained, so the work will address any problems that have developed in those inaccessible areas and also include some modifications to the case so that all parts of the organ can be reached. 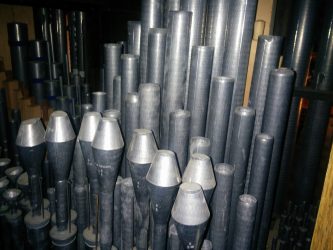 The organ is tuned using a system in which the pipes are hammered into shape around a cone: this can result in more stable tuning than the slide-system used in many English organs but the hammering action also puts pressure on the base of the pipe, especially if the organ is tuned more frequently than needed. The restoration project will include fixing pipes that have been damaged and allow the church to reassess how the instrument is maintained.

It’s also important to remember that in many ways, this instrument was an experiment, built to an untested design, and so inevitably, there are aspects that didn’t quite work, which weren’t implemented in the way intended or which need to be corrected: it transpired, for example, that the air supply to some of the larger pipes is not strong enough, so that the organ sometimes lacks the power that it needs — lack of air also affects the tuning.

Some funding for the restoration is coming from bequests to the church. The church’s organists have also begun a series of concerts to showcase the organ’s unique characteristics: Charles Wooler gave a recital of the baroque music where the instrument excels; three student organists highlighted its importance as a teaching instrument; and David Harris continues the series on 7 July with a programme that explores the wider capabilities of the instrument in the romantic and modern repertoire. (Details below) 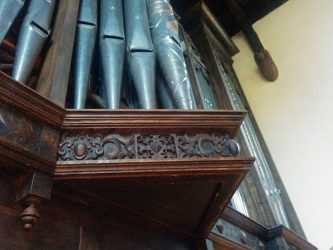 The guiding vision behind the project is to remain faithful to the original vision of David Higgins, Ben de la Mare and Peter Collins. Over the course of an hour talking to David Harris about the instrument, I really gained a sense of why this instrument is different, and important. David is passionate about the instrument and its potential, and summed things up by saying: “It’s an opportunity to raise the profile of this organ and what it does for the church. It deserves it, it really does. Peter Collins’s organs are the hidden gems of the organ world and his artistry deserves more prominence. Our organ at St Oswald’s has such an individual character and when it is enabled to give the best possible account of itself, and to give full voice to the vision of the men who designed and built it, it could be one of the best organs in the region”.

Technical details and a list of stops can be found here: www.duresme.org.uk/NEorgans/oswalds.htm

For further details about the restoration project and how to contribute contact David at d.m.harris108@gmail.com

St Oswald's church are launching a campaign to restore their organ. David Harris, Director of Music at the church, told me more about this unusual organ and why its restoration will pay tribute to the vision of the people who designed and built it.

PrevPreviousAbraham and Isaac
NextLife at Samling AcademyNext
Music in Durham brings you classical music listings, previews, reviews and news for Durham, with a bit of random blogging thrown in. The concert listing pages bring together classical music events from across the City and the University, so whether you’re looking for a great concert to go to, or if you’re planning something and want to avoid clashes, this is the place to look.
Menu
Twitter Facebook-f Envelope