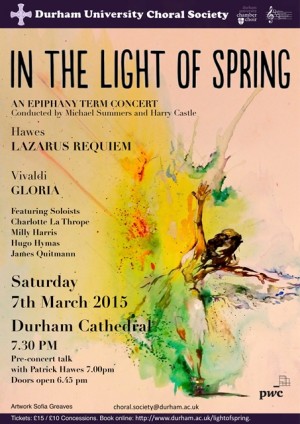 Durham University's musical groups are gearing up for their end of term concerts, and as usual we're spoilt for choice, with music ranging from much loved baroque masterpieces to the excitement of brand new works.

Durham University’s musical groups are gearing up for their end of term concerts, and as usual we’re spoilt for choice, with music ranging from much loved baroque masterpieces to the excitement of brand new works, all performed to the highest standards of student music-making.

The university Symphony and Chamber orchestras get things started tonight with their concert at Elvet Methodist. Mezzo-soprano Marnie Blair, who I hope has recovered from her bruises after all the staged falls inflicted on her Cherubino in The Marriage of Figaro last week, sings Britten’s Charm of Lullabies, which I’m particularly looking forward to. There’s some local flavour in Peter Maxwell Davies’s Kettletoft Inn, which was originally written for the great Northumbrian piper Kathryn Tickell – tonight’s soloist is Alice Burns. There’s some Rossini too as well as the colour and drama of Berlioz’s Symphonie Fantastique. Durham University Palatinate Orchestra have some more classics on Thursday: the sumptuous string sounds of Vaughan Williams’ The Lark Ascending and Barber’s Adagio, and in his 150th anniversary year, Sibelius’s great hymn to his homeland, Finlandia.

Both orchestras have brand new works on their programmes too. The Palatinate Orchestra premiere an orchestration of Albeniz’s Chants d’Espagne by Professor Richard Rijnvos, Durham University Music Department’s Head of Composition. DUOS meanwhile are supporting the next generation of talented composers in Durham: the intriguingly titled An Artist in the Garden of the Green Fairy by Matthew Warren, which they unveil tonight, is the winning entry of the inaugural DUOS composition competition.

In the last couple of years Durham University Choral Society have started to champion Durham composers too – last year in their Epiphany concert they premiered Ben Rowarth’s Christus and this year, on Saturday 7 March, they turn to the work of Durham alumnus, Patrick Hawes who has had an impressive compositional career including a spell as Composer in Residence at Classic FM and albums at the top of the classical music chart. His 2008 choral work Lazarus Requiem uses the traditional Requiem texts, following Fauré’s pattern alongside passages from the moving story in John’s Gospel where, shortly before his own death, Jesus, moved to tears with the pain and grief of bereavement, makes his great declaration “I am the resurrection and the life”.

A note from the composer in the preface to the score begins “The writing for the tenor soloist is deliberately high. The aim is to create a character who exists in a different dimension from the other protagonists and whose ‘speech’ is both profound and sensuous”. The tenor soloist on Saturday is recent Durham graduate Hugo Hymas, a singer for whom “profound and sensuous” is a pretty good description. The choral society concert also includes Vivaldi’s joyous and vivacious Gloria – and the other soloists are all recent and present Durham singing stars – Charlotte La Thrope, Camilla Harris and James Quitmann.

Then after all this, we get the sublime glories of Bach’s B Minor Mass sung by Durham University Chamber Choir on Sunday 8 March. The first time I encountered Bach’s masterpiece was when I sang it with Durham University Choral Society in 1993. From the first noble chords of the Kyrie, coming unaccompanied from nowhere, to the majestic peace of the end Agnus Dei it never fails to delight and move me to my very core.

Follow the links below for more details of all these concerts

Durham University's musical groups are gearing up for their end of term concerts, and as usual we're spoilt for choice, with music ranging from much loved baroque masterpieces to the excitement of brand new works.

PrevPreviousA disturbing day of madness: DOE Figaro
NextDUOS: A Fantastical Epiphany term concertNext
Music in Durham brings you classical music listings, previews, reviews and news for Durham, with a bit of random blogging thrown in. The concert listing pages bring together classical music events from across the City and the University, so whether you’re looking for a great concert to go to, or if you’re planning something and want to avoid clashes, this is the place to look.
Menu
Twitter Facebook-f Envelope