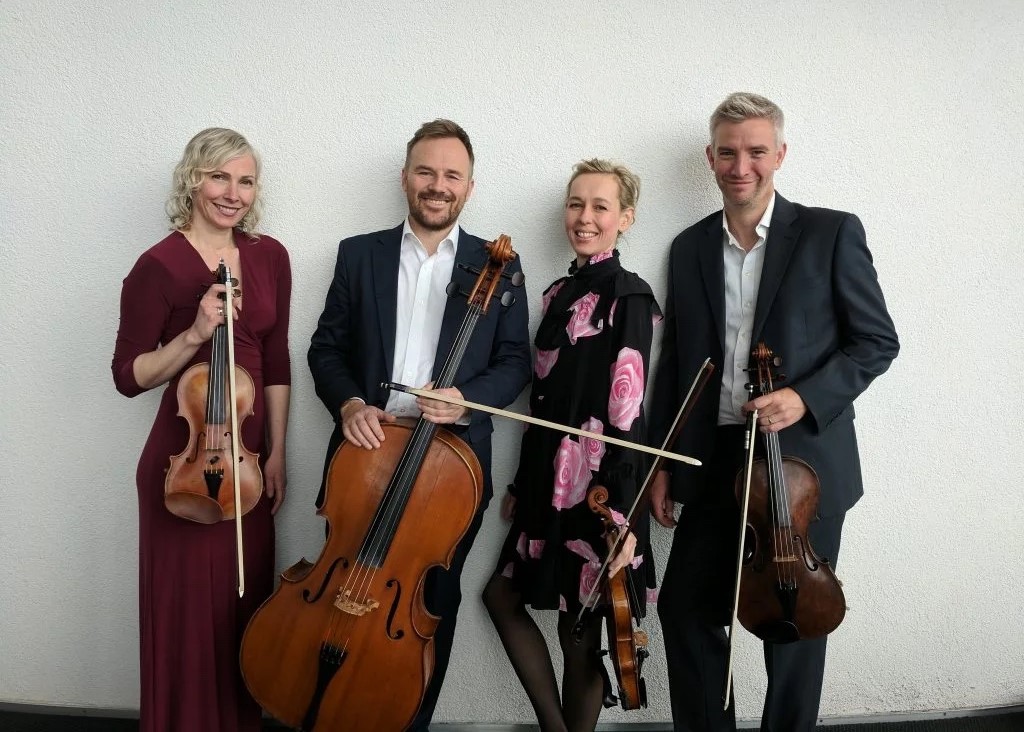 A few years ago, Royal Northern Sinfonia had a series of chamber concerts with ensembles drawn from their players. I particularly enjoyed seeing members of the orchestra in this close-up setting, often playing works that they had chosen, and talking about the music from the stage. More recently, we’re able to see this happening again with the Frankland Quartet, formed in 2017 by long-term members of the orchestra, and it was with pleasant memories of that RNS chamber series that I went along to hear them in Durham University Music Department, where they are now quartet in residence.

Introducing their choice of music, cellist Daniel Hammersley told us that Dvořák said of his ‘American’ Quartet that he wanted to write something melodious and simple, and that his thoughts kept returning to ‘Papa Haydn’ and tt was with this in mind that the Franklands began their programme with the fourth of Haydn’s Opus 20 set. With the gypsy influence of its final two movements, it proved to be an excellent pairing with the Dvořák, and the Frankland Quartet really let rip when they got to these, contrasting with the delicate ornaments and singing lines in the first two movements. There were elements of the baroque too in these first movements, and this came through in the clearly distinct lines of the counterpoint. First violin Sophie Appleton brought a relaxed sense of improvisation to the second movement, and this was then taken up by all four players in the third, but particularly in the cello. The fourth movement began neatly but picked up in spirit, driven forwards by second violin Sarah Roberts as it broke into a cheeky reel, punctuated by brief stillnesses before taking off again. It was a lot of fun, and the Frankland Quartet were clearly enjoying themselves immensely.

Cruising in between the Haydn and Dvořák came Anna Meredith’s wonderfully named Songs from the M8, a set of five miniatures that she wrote as a homage to teenage journeys on the motorway between Glasgow and Edinburgh. The motorway felt particularly present in the first and fourth movements, full of glissandi and sawing bowing that made me think of the swishing of nighttime traffic in the rain, before fading away into whispery harmonics. I actually found the fourth movement rather scary as it infused me with the jittery nerves that come when you’re in fast, busy traffic on an unfamiliar road. The second movement bristled and fizzed with pizzicato and glancing strikes of the bows, followed by a wandering viola solo that ground to a halt. There were two quite young girls sitting in front of me who, from their conversation I think were learning string instruments themselves, and I enjoyed seeing how fascinated they clearly were by some of the techniques on display. The piece ended with a final almost imperceptible ping high in the first violin and this seems a good moment to mention the greatly improved acoustics in the Durham Music Department’s concert hall, thanks to a new layer of window glazing. Although the chiming of the cathedral bells is still faintly audible when there is silence, they no longer intrude on performances in quite the same way, and the room itself just feels quieter.

Dvořák’s ‘American Quartet’ (no.12) is a piece that I’ve been listening to a lot recently – it was included on the cover CD of the latest BBC Music Magazine, and it really grabbed me, so I jumped at the chance to hear it being played in concert. I enjoyed the purposeful approach that the Frankland Quartet took to open the first movement, with James Slater adding a particular punch to the viola line before Sophie Appleton took over the prayerful hymn-like tune, that brought to mind Willa Cather’s beautiful descriptions of prairie landscapes. The gorgeous second movement didn’t linger but went along with a gentle lilt, with just a touch of smokiness and the duet passages between the two violins were particularly lovely. The refreshing third movement pulled us back towards Haydn before the skipping dance of the joyful final movement, light and carefree in the late evening sunshine.

PrevPreviousThe Tale of the Golden Cockerel
NextDUCC Descend to EarthNext
Music in Durham brings you classical music listings, previews, reviews and news for Durham, with a bit of random blogging thrown in. The concert listing pages bring together classical music events from across the City and the University, so whether you’re looking for a great concert to go to, or if you’re planning something and want to avoid clashes, this is the place to look.
Menu
Twitter Facebook-f Envelope