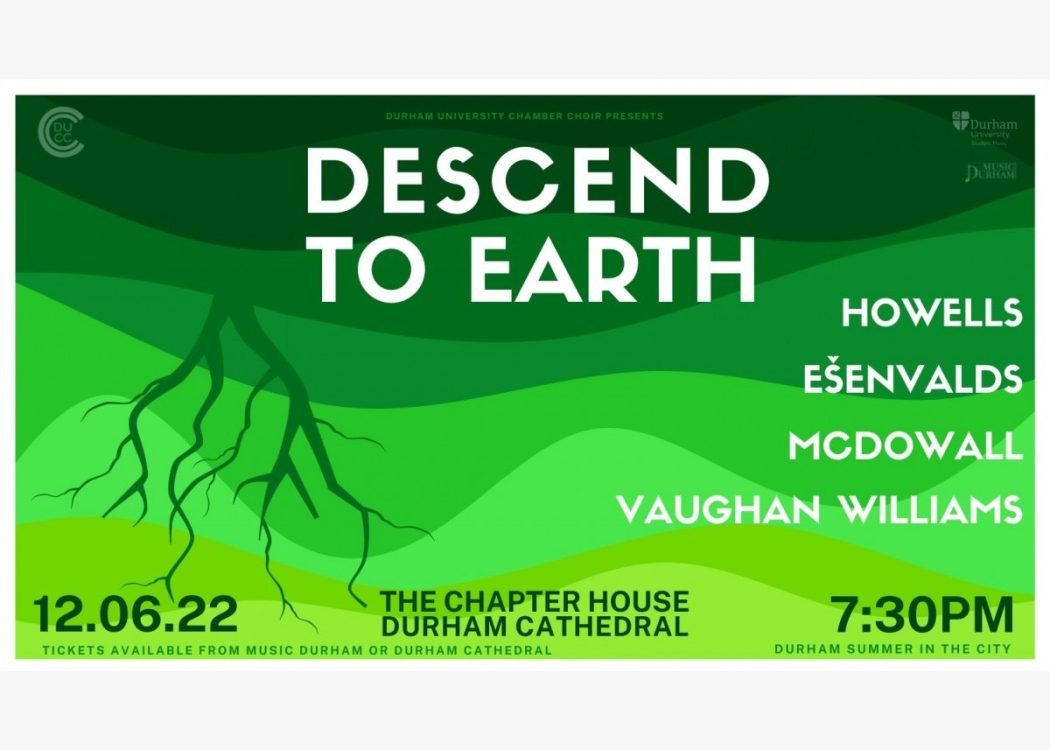 Several themes threaded their way through ‘Descend to Earth’, Durham University Chamber Choir’s intriguing programme for their final concert of the year. Folk songs and voices of the people rising up from the earth mingled with ideas of death, graves and burial and, conversely, the Christian hope of life beyond the grave. We began though, not in earth, but under the sea with Ralph Vaughan Williams’ Three Shakespeare Songs, and the sonorous tolling bell that opens the first of the set, ‘Full Fathom Five’. It was a beautiful start to the evening, with DUCC and the Chapter House acoustic creating plenty of resonance for these hummed chimes before revelling in Vaughan Williams’ sumptuous harmonies. The choir nimbly managed the gear change for third of the set, achieving lightness and precision in ‘Over hill, over dale’.

Vaughan Williams is well-known for his choral arrangements of folk-songs, but I often find these a bit twee and artificial and I was glad that DUCC instead chose some more contemporary settings that for all their complexity felt to me much earthier and more honest than some choral settings can be. Hilary Campbell’s Blow the Wind Southerly began with a background of whistling wind noises and the first simples statement of the tune then breaking apart into something darker and more complex as the story gathered pace. There was a lovely poignant solo from alto Jess Whitehead – and full marks to this year’s DUCC for crediting their step-out soloists in the programme. (It certainly makes my life easier!).

The Dying Soldier by Nigel Short brought the tenors and basses to the forefront, taking words from the American Civil War set to the Scottish tune ‘Barbara Allen’. The voice of the eponymous soldier was spread very effectively across four soloists, Nick Stoner, James Eyles, Lukas Russell and Alexander Lee. But for me, the real standout piece of the folk music on the programme was Richard Marlow’s hauntingly beautiful setting of, of all things, John Brown’s Body. This was a million miles away from the silly childhood versions we all know – not to mention a certain infamous Durham drinking song – and DUCC delivered it very effectively, with deep respect. Marlow’s setting began with the heavy tramp of marching feet – all in all this was quite a concert for choral sound effects – building up to a radiant end as John Brown’s soul marches on.

There were more marching feet in Benjamin Britten’s Advance Democracy, a piece written for the London Co-operative Society in 1938 in response to the Munich agreement. Britten takes Randall Swingler’s leaden, earthbound words and lifts them to such an infectiously joyful conclusion that you can’t help but be carried away by their optimism. Conductor Adam Whitmore brought out the deep sense of foreboding that begins the piece, keeping the sound icy and distant, until the marching crowd drew closer and swept us along in their train.

As well as all the vocal sound effects, we also had the textures of instruments adding interest to two pieces by Ēriks Ešenvalds. Hotense Comon stepped out of the choir for the violin line of My love is like a red, red rose alongside a folk-inflected solo sung with grace and simplicity by soprano Laura Murphy, whilst second-year music student Jacob Nathenson added saxophone improvisations to Long Road. However, these pieces and some of the other smaller items on the programme, failed to say anything of great interest and just washed over me in a haze of cluster chords – all very lovely but to my taste, a bit dull and there were occasional sloppy endings and hints of tiredness in some of these pieces. These were very minor niggles though, as the choir were, on the whole, as excellent as ever. DUCC have achieved extraordinarily consistent high quality for decades and for this evening’s concert had benefitted from a lick of extra polish with preparatory masterclasses with conductor Robert Hollingworth and with singer, vocal coach and Durham alumnus Charles MacDougall.

The climax of the concert was undoubtedly the very fine performance of Herbert Howells’ Take him, Earth, for Cherishing, one of the masterpieces of English choral music. Adam Whitmore was alert to all the colours of the piece – a creepy darkness to recall the serpent and the fall, the bleakness of the wind and dust and, most strikingly,  a vivid suggestion of a tolling bell in the first section of counterpoint that echoed back to the opening of the concert. Any tiredness was utterly banished. The unison sections were immaculately blended and despite the big acoustic, I was vividly alert to all the lines of counterpoint. The concert could easily have ended there, but the Chamber Choir brought us gently back down with Ken Burton’s Descend to Earth. The piece sets a poem by Phillis Wheatley who was transported from West Africa as a child in the eighteenth century to slavery in the US and became a household name for her poetry. Burton colours the inspiring final lines of the poem ‘Enlarge the close contracted mind / and fill it with thy fire’ with lively sparks and flickering flames, which DUCC delivered extremely effectively to close the official programme. Adding John Rutter’s ‘Sing a song of sixpence’ from Five Childhood Lyrics gave DUCC a final chance to show off their crisp and disciplined delivery. 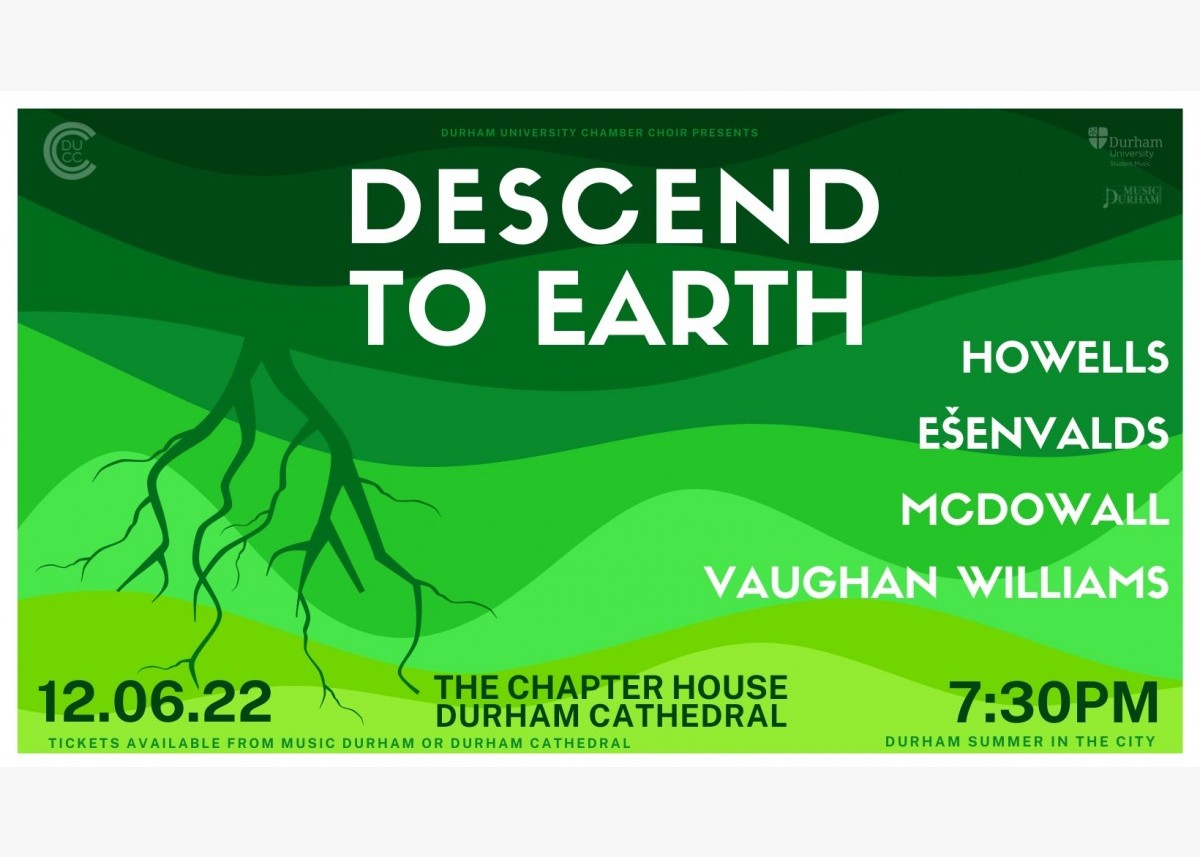 PrevPreviousA road trip with the Frankland Quartet
Music in Durham brings you classical music listings, previews, reviews and news for Durham, with a bit of random blogging thrown in. The concert listing pages bring together classical music events from across the City and the University, so whether you’re looking for a great concert to go to, or if you’re planning something and want to avoid clashes, this is the place to look.
Menu
Twitter Facebook-f Envelope