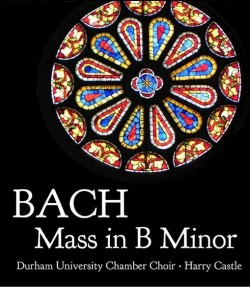 Highly accomplished solo and ensemble singing from Durham University Chamber Choir in one of the greatest pieces of choral music ever written. 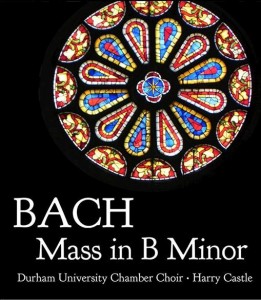 J.S. Bach assembled the music for his Mass in B Minor towards the end of his life, bringing together movements from earlier works, and ideas he’d been tinkering with for a few years as he pondered the idea of creating a “Great Catholic Mass”. The end result was not performed in its completion until after his death, and it stands now as a monument not just to Bach’s work but, in the eyes of many, it stands among the greatest achievements of Western music. It’s certainly a piece many hold dear, including me, and probably rings out across thousands of imaginary desert islands.

With all that weight of love riding on its back, and its sheer musical power the B Minor Mass makes a big emotional demand on anyone who embarks on singing it – and to add to the challenge, it’s not a particularly easy sing either. Durham University Chamber Choir were clearly not daunted by it in the slightest, and last night’s performance in the Great Hall of University College was notable for its accomplished solo and ensemble singing.

The movements that particularly stood out for me in this performance were the broader, more expansive parts, where conductor Harry Castle gave the singers space to relish the richness of Bach’s choral writing – this came through best of all in the luscious suspensions of the Et expecto in the Credo where the choir piled up the tension before the wonderful release into the fast section that follows. The third section of the Kyrie was driven forwards by a thundering bass section, with long phrasing in all parts that filled the music with energy even at a relatively slow pace. The Gratias Agimus Tibi of the Gloria cooked with a slow, controlled simmering, which finally came to the boil when the same music returns at the very end of the Mass. The fast passages were generally on the slow side, but nevertheless the choir injected plenty of excitement with powerful, precise singing – and although I didn’t like the very clipped Kyrie, it did show off the choir’s discipline. The sopranos, clearly relishing the higher notes of modern pitch, added plenty of zing to the most brilliant parts of Bach’s exuberant lines and the basses glided through the notorious et iterum venturus est with impressive unanimity.

It’s a mark of the quality of DUCC that eleven different singers took the solos, all of them excellently sung. I particularly enjoyed the way Janelle Lucyk and Fiona Brindle interacted with each other so closely to turn the Et in unum duet into an intimate, mutually supportive conversation. James Quitmann poured out the Et in Spirtimum in an unbroken honeyed flow and Megan Griffiths smouldered through the lower parts of Laudamus te. At the end of a supremely busy term, alto Marnie Blair showed her usual gorgeous control on the long phrases of the Agnus Dei which she sang with quiet sadness over carefully delicate violins and a heavy bass.

There were some good orchestral solos, most notably the sweet, unbroken flow of Sophie Miller-Molloy’s flute obbligato in the Benedictus, and some nice oboe playing, particularly in the Kyrie and the Qui Sedes. Double bass Will Cowley was magnificent throughout, giving a firm, steady depth to the music, and I could see lots of people around me who were obviously enjoying his energetic moving line at the start of the Credo as much as I was. Overall though, the orchestra sadly didn’t match up to the quality of the singing, and I suspect that after so many other concerts and events this term, they simply hadn’t had the time to get to grips with Bach’s demanding writing. That said, it’s very encouraging that this year’s DUCC Bach was accompanied by students, rather than professionals as they had for the St John Passion last year, and I hope it’s a sign that the standard of baroque instrumental playing in Durham will continue to develop.

Highly accomplished solo and ensemble singing from Durham University Chamber Choir in one of the greatest pieces of choral music ever written.

PrevPreviousDUOS: A Fantastical Epiphany term concert
NextThe Bishop’s Consort: St John PassionNext
Music in Durham brings you classical music listings, previews, reviews and news for Durham, with a bit of random blogging thrown in. The concert listing pages bring together classical music events from across the City and the University, so whether you’re looking for a great concert to go to, or if you’re planning something and want to avoid clashes, this is the place to look.
Menu
Twitter Facebook-f Envelope