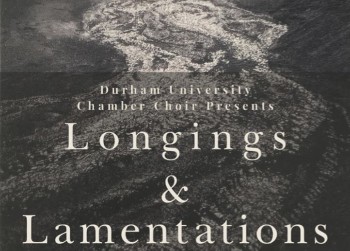 Like the restless waves that featured on the poster and made appearances in the music, Durham University Chamber Choir’s concert ‘Longings and Lamentations’ ebbed and flowed, shifting between sacred and secular, the very old and the modern, and with everything from solo voices up to complex 12-part music, and these changes matched the theme of longing and spiritual struggle that threaded together this imaginative programme.

Over a seamlessly sustained hum from the choir, soprano Natalie Houlston began the concert with Hildegard von Bingen’s chant Spiritus Sanctus Vivificans. She sang from the back of the Chapter House – all the better for raising the hairs on the back of my neck with her pure, ethereal legato.

This other-worldly sensation continued into the next piece, Knut Nystedt’s Immortal Bach, in which the opening two lines of Bach’s ‘Komm süßer Tod’ are sung very slowly, with each part going at a different speed, creating an uncanny sense that time is being stretched and warped. The long sustained notes were impressively even, an unbroken thread of sound, and the singers showed impressive vocal control as conductor Marcello Palazzo shaped the dynamics.

Palazzo’s group retains the characteristics that so impressed me with last year’s DUCC – a balanced and mostly well-blended ensemble (there are one or two voices that need reining in a little), all with technical confidence, and and a feeling that this is a group of equals, with no individuals being the ‘star soloists’. The latter was clear from Palazzo’s treatment of the Monteverdi and Gesualdo madrigals that were scattered through the programme: a different five-voice consort group took each one. The two Gesualdo madrigals, S’io non miro, non moro and O dolorosa gioia were full of delicious switches in mood. The first smouldered with quiet passion, never over-doing it, and the second broke into surprising bursts of colour on the word ‘vivo’. The lower voices were darkly brooding at the start of Monteverdi’s Era l’anima mia, with graceful lines in the upper parts. The group who sang O Mirtillo were particularly good at communicating with each other, and after being quite sweetly pastoral for most of it, brought sudden swells of dynamics as the text became more dramatic.

As well as the smaller consort groups, Palazzo included a duet for solo soprano and alto, and two pieces for just the male voices. The first male voice piece, Viderunt Omnes by the 12th century French composer Pérotin took us back to the hypnotic, timeless mood, with the melody line stretching single vowels out beyond any comprehension, over a drone based on open fifths. The singers stayed well-focussed through these long passages, giving them a good sense of shape and direction, and it ended with an elegant passage of plainchant from the tenors. In contrast to this bleak, and rather lonely sound, the men also treated us to Granville Bantock’s smoochy setting of Byron’s She Walks in Beauty. I don’t normally approve of such blatant sentimentality, but I was completely seduced by the simple warmth and sincerity with which the DUCC men sang this. The female duet was Peter Maxwell Davies’ setting of a medieval poem Fader of Heven, sung by Eleanor Hunt and Emily Beringer, positioned one each side of the Chapter House, so that the two haunting lines intertwined above our heads.

Palazzo continued to play with the space for Lassus’s 12-part Domine Quid Multiplicati Sunt, separating two choirs at the front, and placing the third group at the back, so that we were enveloped in waves of sound. A lot of the textual detail was lost – an ongoing problem during the evening, although forgivable in the Chapter House’s enormous acoustic – but the overlapping lines came through nicely. Gretchaninov’s setting of the Lord’s Prayer, Otche Nash, also allowed us to be submerged in DUCC’s richest sounds, in which the basses glowed luxuriously – and I could hear enough of the words to be impressed by DUCC’s command of Church Slavonic and the way they conveyed the meaning of the text.

For me, the highlights of the evening were the three complex contemporary pieces on the programme, by James Macmillan, Thomas Adès and the Polish composer Paweł Łukaszewski. Łukaszewski was new to me, but definitely someone I’d like to explore more after hearing these two settings of Shakespeare sonnets. Like as the Waves began with little surges of sound, and the lines of the poem, which considers the unstoppable march of time, were interspersed with a solemn tolling of the word ‘time’, like a clock chime. DUCC began Weary with Toil with a lovely feeling of peace, but brought in jewel-like flashes of bright sound to colour the text.

Thomas Adès is currently a bit of a musical obsession of mine, so I was delighted to hear his Fayrfax Carol, a piece that is part of that wonderful legacy of Stephen Cleobury’s annual commissions for King’s College Nine lessons and carols. It’s one of those bittersweet medieval poems in which Mary sings a lullaby to her new-born baby, but looks ahead to his destiny. DUCC were very expressive in the way they shaped the falling, sighing motif, and even in its livelier chanted section and in the dazzlingly high ending, a mood of sadness hung over the piece.

I heard James Macmillan’s O virgo prudentissima last October when it was the highlight of The Sixteen’s Choral Pilgrimage concert, and I never imagined that I would hear this stunning, but technically challenging piece again so soon. DUCC are to be congratulated for their commitment to tackling it in the first place, and for singing it so magnificently. The eerie, high-pitched humming that comes throughout the piece and seems to suggest the music of the stars was beautifully poised, and the Chapter House was flooded with sound as the music described the sea crashing against cliffs. Soprano Hannah McKay was dazzling in the stratospherically high solo line. The words in the concert title merged at the end, as the singing became charged with desperate longing, mingled with keening lamentations, before breaking into utterly gorgeous alleluias, giving relief and hope.

PrevPreviousDurham Opera Ensemble – Eugene Onegin
NextBrandenburg Concerto No.2Next
Music in Durham brings you classical music listings, previews, reviews and news for Durham, with a bit of random blogging thrown in. The concert listing pages bring together classical music events from across the City and the University, so whether you’re looking for a great concert to go to, or if you’re planning something and want to avoid clashes, this is the place to look.
Menu
Twitter Facebook-f Envelope