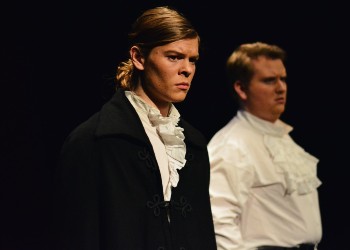 Depending on the production, on my own mood, and on how strongly Pushkin’s original poem happens to be in my mind, the final scene of Tchaikovsky’s Eugene Onegin, can arouse a range of feelings in me. At the more romantic end of the scale, I can allow myself to feel heartbroken by the insurmountable barriers between Onegin and Tatyana. Sometimes I feel bitterly for Onegin, for his stupidity, for all the wrong turns and missed chances. At other times, it’s Tatyana who rouses all my admiration for sticking so nobly to her principles and her vows, despite her longing to be with Onegin (in the poem, we know she’s desperately unhappy in St Petersburg, but Tchaikovsky doesn’t spell this out, safely assuming his audience know the poem inside out, and this gives modern opera directors some flexibility). And then, there are times when I cheer Tatyana on, and I’m with her every second of the way as she makes a firm stand against Onegin’s empty words. This last emotion was the one that Durham Opera Ensemble(DOE) brought me to in their production of Eugene Onegin, as Poppy Metherell’s dignified Tatyana refused to succumb to Edward Wenborn, who throughout the evening had not allowed a shred of basic human decency to get in the way of Onegin’s selfishness.

From his very first entrance, Edward Wenborn was spectacularly chilly in his characterisation of Onegin, sending his icy blasts of cynicism over everything he touched. I winced for poor Tatyana suffering under his withering condescension and utter lack of pity in the garden scene following the delivery of her letter. He has the voice to match too; a clear ringing baritone, with a steely edge to it that could switch to charm when it suits him – for moments such as when he decides to flirt with his best friend’s fiancée out of spite, just because he’s bored. He was every inch that person we all know who thinks that charming words are enough to get them out of any situation and is a bit flummoxed when it doesn’t work.

Set against him, Poppy Metherell was a sincere and serious Tatyana, with a warm tone that she was able to use to great expressive effect as she carefully negotiated her character’s development from the over-emotional young girl, to the mature woman who has accepted her fate. She rose splendidly to the most demanding scene in the opera, owning the stage for the fifteen-minutes of the famous Letter Scene, which gained added urgency from being taken at quite a brisk pace and in Act III when she bitterly throws Onegin’s words back at him, she did so with such spirit that it was no wonder Onegin was momentarily taken aback.

There was strong singing too from the other main cast members. Olivia Jones’ light and sweet voice was perfect for carefree Olga, and she and Poppy Metherell played off each other nicely as they set out their contrasting characters in the opening scene. Alistair McCubbin seemed a little awkward in his opening love scene with Olga, but to compensate, there was plenty of expression in his singing, and a nice silky tone. His outrage and bitterness duringTatyana’s name day party was finely done, and in another of the opera’s big solo set-pieces, his aria before the duel lamenting everything he’s lost was deeply touching. Francis Bertshinger charmed us all as Triquet, and was clearly having a ball (literally!) and Arnold Fortuna had a simple sincerity in Prince Gremin’s aria, with an impressively rich lower range. For me, however, the stand-out singer in the smaller roles was first year Sophie Horrocks as Filippyevna – a big, rich contralto voice, full of expression, but still with some of the clearest text of the show.

The chorus too were impressive, particularly in the unaccompanied peasant song, where they managed to sound thoroughly Russian, and they not only successfully mastered some complex ballroom dancing, but did so that we forgot what a small stage they were squeezed into. It was a pity though that they were all dressed in black for the peasant chorus, and with only splashes of colour for Tatyana’s party, so that they almost disappeared into the plain black backdrop. However, as shown by the minimal set and and the mish-mash of periods in the dresses for the ballroom scene, it’s clear that the production team had clearly done their best on a budget that must have been a lot tighter than what DOE have enjoyed in some years.

This was my first visit to the Assembly Rooms since the 1990s. The theatre has just reopened after a beautiful refurbishment, and it’s now a great venue for small opera, with an orchestral pit and a nice pingy acoustic that helped the voices to carry nicely. However, the drawback for Onegin is that the pit couldn’t accommodate an orchestra big enough to do full justice to Tchaikovsky’s sumptuous score and the eight string players struggled. There was however some nice horn playing from Charlotte Smith, and oboist Jonathan Blake was gorgeous in the Letter scene, heightening Tatyana’s passion with his fluid legato. Whilst Tchaikovsky himself premiered the opera with a student cast and orchestra, and made it clear that he wanted his opera to presented in a simple, intimate way, the Moscow Conservatoire concert hall and the Maly Theatre where it had its first performances are both considerably bigger than the Assembly Rooms, and I think the voices on show at DOE could have comfortably handled a larger orchestra and venue.

PrevPreviousFeuertrunken – A weekend of Beethoven
NextDUCC Longings and LamentationsNext
Music in Durham brings you classical music listings, previews, reviews and news for Durham, with a bit of random blogging thrown in. The concert listing pages bring together classical music events from across the City and the University, so whether you’re looking for a great concert to go to, or if you’re planning something and want to avoid clashes, this is the place to look.
Menu
Twitter Facebook-f Envelope