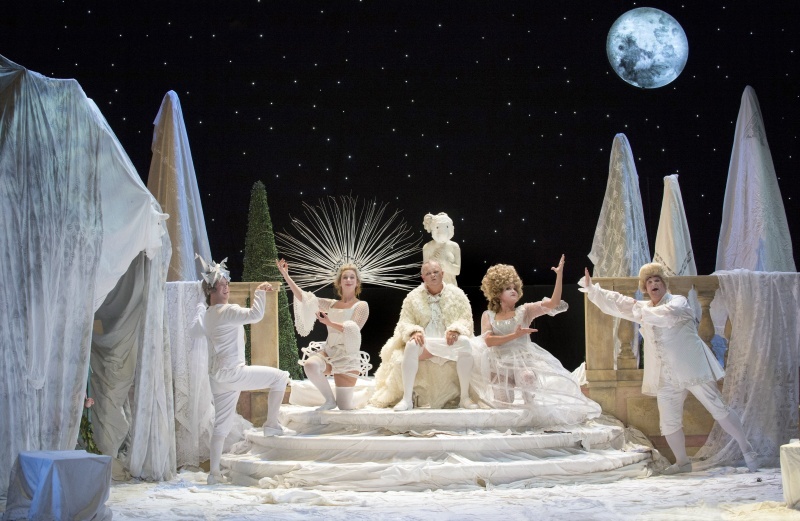 In the wake of any significant new discovery, you can be certain that there will be quacks and fraudsters hanging around on the edge, waiting to exploit those who are too gullible and stupid to understand the real science – this is the premise that Haydn exploits to great comic effect in his opera Il mundo della Luna, which was given a boisterous performance by English Touring Opera at the Gala Theatre, in a new translation under the title Life on the Moon.

By Haydn’s lifetime, astronomers had been long freed from religious scruples about Earth’s position in the heavens, and huge progress in telescope building led to exciting new discoveries, and speculation about the possibility of life beyond earth. The plot of the opera revolves around an astronomer who fools an old man first into thinking that he can see the inhabitants of the moon through his telescope and then audaciously pretending that they have actually flown there.

Cal McCrystal’s production, and James Conway’s witty new translation, streamlined the plot by cutting out the two more serious characters, Flaminia and Ernesto, although fortunately one of the opera’s highlights, Flaminia’s coloratura aria “Ragion nell’alma siede” survived the cut by being reallocated to Clarice, sung by Jane Harrington, who gave it plenty of firepower, rock solid high notes, and some excellent crisp runs.

As ever, English Touring Opera’s sets and costumes were gorgeous: for Act I a lovely luminous full moon shone over a stylised garden with a rose-covered bower, a statue and clipped hedges, and the singers all in pretty period dress. The three men, Ecclitico the “astronomer”, his sidekick Cecco and Buonafede the old man all quickly established their characters, with excellent singing and acting. Andrew Slater as Buonofede was delightfully bluff and foolish, and at times allowed us just a subtle hint of sympathy for his deluded old fool, who is so completely alienated from any sort of enlightenment – scientific, moral or social. His simple innocence when he thinks he has arrived on the moon and found life there was almost touching, until he reminded us of his true nature by leering at the moon-creatures.

Christopher Turner’s Ecclitico oozed confidence and swagger until we saw him alone, singing passionately of his love for Buonofede’s daughter Clarice. His big love aria was smooth and agile, with nice phrasing and accompanied by a wonderful bassoon obbligato that reminded us of the contrast between this love-struck man and his coolly cynical public persona. His servant Cecco, sung by Ronan Busfield, is nothing but cynicism, enjoying the game but with a raised eyebrow. Cecco really comes into his own when he is elevated to the role of fake Emperor, and can barely restrain his glee when he gets to sing about how “they’re all mad on planet Earth”.

The entire garden was draped with white cloths to create an eerie moonscape for Act II: even the statue had an alien mask, and the eighteenth century map of the world hoisted across the face of the moon was a nice touch. The singers switched into suitably absurd all-white costumes – Clarice, for example wore a bizarre frame skirt hoops with a face attached, and it’s perhaps for the best that ETO’s production gallery didn’t include Cecco as the lunar Emperor with his grotesque member. One of the loveliest scenes in the whole opera was the moment when Buonfede’s servant Lisette arrives and is told she is to marry the “Emperor” of the moon. Martha Jones, a sharp, knowing Lisette managed to convey both a childish rapture at her apparent fortune, whilst letting us know that she’s figured out the joke in her aria “Imagine me on a throne”.

The plot, the libretto and Haydn’s joyful music make for plenty of fun and James Conway added more comic touches, to varying degrees of success. Before the music began, Ronan Busfield came on stage and gave a brief synopsis and comic introductions to the singers, (“for those too cheap to buy programmes”), and there were some fun interactions between actors and stage hands. Unfortunately though, some of the production was marred for me by excessive slapstick – Cecco failing to light candles during the overture, or Clarice staggering around drunk during “Ragion nell’alma siede” were just distracting, and I was positively annoyed by having the music stopped while we watched Cecco dropping the pieces of Ecclitico’s over and over again. But, in a plot that requires us to laugh at a man who is taking great delight in voyeurism and in watching women being horribly beaten, perhaps there was no other way to do it than to take everything to a level of pantomime absurdity.

The Old Street Band brought out all the lovely detail of Haydn’s score, particularly in his atmospheric evocations of his imagined lunar world – soft, beguiling strings as Ecclitico and Buonafede “fly” to the moon, mocking bird calls as the pranksters demonstrate the moon’s wildlife and lots of fire to support Andrew Slater’s almighty rage when the trick is unmasked.

Of course in the end, reason, enlightenment and love all prevail; the final ensemble making a definitive statement that really “there’s no life on the moon”, with the implication too that there is no place on earth for Buonafede’s disgusting fantasies of male supremacy – one of those moments when opera looks more attractive than the real world.

PrevPreviousRenaissance Remembrance
NextETO Handel: OttoneNext
Music in Durham brings you classical music listings, previews, reviews and news for Durham, with a bit of random blogging thrown in. The concert listing pages bring together classical music events from across the City and the University, so whether you’re looking for a great concert to go to, or if you’re planning something and want to avoid clashes, this is the place to look.
Menu
Twitter Facebook-f Envelope