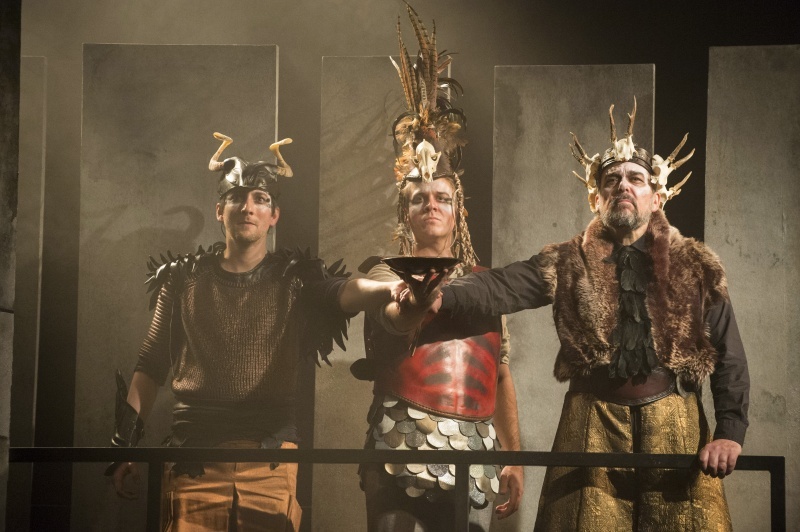 Anger and terror lie at the heart of English Touring Opera's thrilling production of Tippett's opera King Priam - my review from their performance at the Gala Theatre Durham.

Sing Goddess of the anger of Achilles. The opening lines of the Iliad are dark and thrilling, setting the scene immediately for the complex stories of betrayal, weakness, revenge, pettiness and heroism that follow. Anger simmers permanently beneath the surface of Tippett’s second opera King Priam, a neatly compacted retelling of the Iliad, beginning with Queen Hecuba who is tormented by the baby she can’t love, and continuing through to King Priam’s rage over the loss of his favourite son. Every terrible event in the story is carefully pinned onto someone’s bad choice and the sparse fury of Tippett’s score, beginning with inarticulate wails of anger or grief, draws the audience in to share the helpless rage that comes from the realisation of all these misguided, stupid decisions.

English Touring Opera’s Olivier Award winning production of King Priam, which came to the Gala Theatre last night, captures the unchanging human weaknesses that lie at the heart of the Troy story. The set and costumes stand utterly outside time; drab modern clothes mix with Greek chitons, bits of armour, fur, damask and extraordinary headdresses made of animal skulls, antlers, branches and feathers, and in the dim light the angular walls and windows at the side of the stage could be brutal modern concrete or ancient whitewashed adobe. Clever lighting through the windows creates startling shadows from the headdress silhouettes and casts brilliant shafts across the stage, which often suggest that something is happening off-stage – as indeed it usually is, for Tippett uses chorus figures to move the story along, homing in on the key moments when all those terrible decisions are made.

English Touring Opera’s strong cast delivered Tippett’s awkward vocal lines with conviction and fire, led by Roderick Earle as a dignified but troubled King Priam. His meditations on his fate and on the tragic decisions that brought destruction on his city and his family lent the music a fierce beauty, and his lines meshed seamlessly with the vivid orchestral commentary that adds so much characterisation and depth throughout the opera.

Laure Meloy’s Queen Hecuba was mesmerising in her steely, unbending pride, her desire to defend Troy overriding all sense of familial duty as either wife or mother. She and her absolute opposite, Camilla Roberts’ Andromache, gave an electrifying portrayal of the opera’s conflicting loyalties between family and nation – their stubborn argument about whether to call Hector back from battle was laden with unexploded bombs. Between them Helen (Niamh Kelly), who seems permanently sated with sexual satisfaction and blind to everything but the delights of Paris’s bed. She carried off her long monologue extolling the power of love with burning, hypnotic passion, matched by the intense violin solo that spirals its way from hell to heaven.

Out on the ramparts, in and the battlefield, the male characters were fierce and loud, unflagging in their energy. The brothers, Paris (Nicholas Sharratt) and Hector (Grant Doyle) were both strong and clear, and Sharratt drew out some interesting nuances in Paris’ character; a childishly naive desire to please that can never quite overcome the weakness and cowardice. The final scene between Paris and Priam was heartbreaking – Paris hoping so much that by killing Achilles he can make everything right and the realisation by both men that it’s now too late.

The chorus trio of Adam Tunnicliffe, Clarissa Meek and Andrew Slater were particularly good at bringing out some underlying lyricism in Tippett’s brutal lines, as was Piotr Lempa in his brief appearance as Patroclus. As Achilles Charne Rochford was rather shrill in what should have been a tender, quiet scene with Patroclus but he utterly terrifying in his anger, particularly in the blood-curdling end to Act 2 when he leads the Greeks in their war cry after the death of Patroclus. I was pinned to the back of my seat by the force of the violent discords and the sheer volume that powered off the stage at this point. Applauding and then going off to eat ice-cream in the interval felt very wrong.

What really makes King Priam extraordinary is Tippett’s orchestral writing, with long solos and interesting timbres enhancing the vocal lines. The score is heavy on brass and winds, with relentless trumpet fanfare motifs driving things forward, offset by an intricate piano part. The scenes in Achilles’ tent are accompanied by a beautifully evocative solo guitar that shadows every emotion on stage. Tippett uses his string section sparingly – they leave the pit entirely for Act 2  – but there is a wonderfully surprising rich interlude dominated by cellos before Priam’s meeting with Achilles.

Despite all the violence – and Priam’s death at the hands of Achilles’ son reminds us that conflict can rumble on unchecked through the generations, the original cause long forgotten – the opera ends on an ambiguous note. We finish with Hermes giving a gentle homage to the healing power of music and a curious caution about the nature and purpose of storytelling. Do not imagine all the secrets of life can be known from a story. Oh but feel the pity and terror as Priam dies”. The music too ends inconclusively as the orchestra fades out on a series of unresolved chords.

Anger and terror lie at the heart of English Touring Opera's thrilling production of Tippett's opera King Priam - my review from their performance at the Gala Theatre Durham.

PrevPreviousETO – autumn ticket offer
NextSummer music in DurhamNext
Music in Durham brings you classical music listings, previews, reviews and news for Durham, with a bit of random blogging thrown in. The concert listing pages bring together classical music events from across the City and the University, so whether you’re looking for a great concert to go to, or if you’re planning something and want to avoid clashes, this is the place to look.
Menu
Twitter Facebook-f Envelope