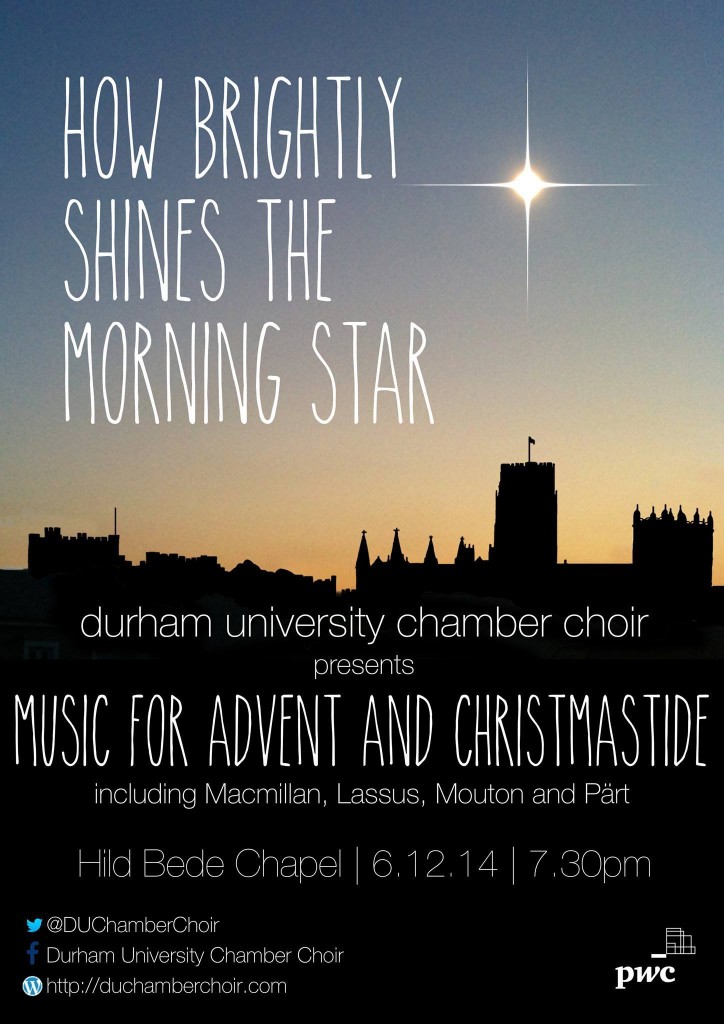 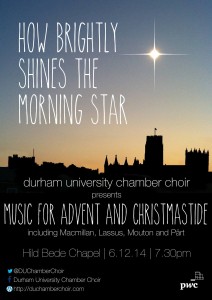 It doesn’t matter that the office Christmas tree has been up for several weeks already and that the cards have started to dribble through the letter box. I can’t start feeling Christmassy until I’ve had a good dose of sparkling Christmas choral music, which this year came courtesy of Durham University Chamber Choir. “How brightly shines the morning star” filled the cold night with the glittering radiance of stars, angels and the light of Christ. The music chosen was made up predominantly of the mixture of unaccompanied Renaissance and contemporary music that is favoured by many groups of this standard, with a few well-known Carols-for-Choirs classics thrown into the mix.
The programme opened with the old medieval carol Gaudete sung with a tremendous amount of energy and kick – there were no drums added here, but they were hardly needed, so punchy was the singing. Although the mood changed to become much cooler and calmer for most of the rest of the programme, the same vitality came bursting out again in a lively performance of Lassus’s eight-part Omnes de Saba venient, but Palestrina’s Hodie Christus Natus Est could have done with some of that same exciting punchiness. Tallis’s Videte Miraculum (one of my own favourites) and Mouton’s Nesciens Mater were both lovely, with a smooth, even and well balanced texture, and the spine-tingling high soprano entry in the Tallis was well supported by solid singing in lower voices. As ever, I wish choirs would do the repeats in Videte Miraculum, just so I can hear that entry three times, instead of just once, but perhaps that’s just being greedy.

James Macmillan featured heavily in the choir’s choice of contemporary music, with four of his pieces on the programme, which was perhaps a bit more than was really necessary, especially as the connections with Christmas were a bit tenuous, but they were all very well sung, with the choir conveying the untamed wildness of the Scottish landscape that often lurks under the polished surfaces of Macmillan’s writing. Data est mihi omnes potestas showed off some wonderfully agile singing in the gorgeous cascading triplets of the Alleluias

Arvo Pärt’s Magnificat can be either boring or gorgeous, depending on who’s singing it, and fortunately DUCC managed the latter, particularly in the exquisite control of the quiet passages, which were as cold and brittle as ice, and conductor Harry Castle manoeuvred his singers expertly through the vast dynamic contrasts. His flamboyant conducting style and big bold gestures made it seem as if he was still conducting a symphony orchestra (as he had been the night before), but it was certainly effective in getting the singers to put across the dramatic details in the music.

The choir’s excellent sustained singing also came across very well in Eric Whitacre’s glowing Lux aurumque, particularly in the high soprano line. A piece that was new to me and that I particularly enjoyed was Bernard Roses’s O quam gloriosum, which began with quite a dense counterpoint then burst into punchy staccato shards on the words “gaude ommes”. Several solos showed off the individual talents within the choir; James Quitmann rolled out the solo line of John Tavener’s God is with us in a majestic unbroken stream, and the clear silver of soprano Janelle Lucyk in Kenneth Leightons Coventry Carol was poignant and tender against the terrifying fury of the choral part.

One test of a really good choir is not how well they sing the really hard pieces, but what they do with the easy classics. When Robert Pearson’s familiar arrangement of In Dulci Jubilo was transformed thanks to tightly disciplined phrasing and a good swing. Tom Rowarth took the solo line in Peter Cornelius’s The Three Kings giving it operatic expression against the quiet warmth of the chorale.

The words O Magnum mysterium are often sung at Christmas Eve midnight mass: the text is a profoundly beautiful evocation of the real mystery of Christmas, reminding us that all the power and majesty of God is contained in this new-born baby surrounded by humble animals. This simple prayer thus makes an excellent ending to a Christmas concert too, this time in the beautiful setting by Morten Lauridsen. I have to confess that I didn’t particularly like this when I sang it a couple of years ago, but after hearing it sung by DUCC, I began to see why everyone adores it. The choir created a magical aura of sound, right through to the deep resonance of the final chord, which brought out all the warmth of the spicy harmonies and carried in it the mixture of wonder and celebration that lies at the heart of Christmas. 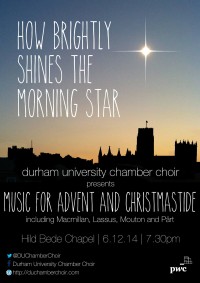 PrevPreviousIntense romanticism from DUOS Symphony orchestra
NextConcert previews – Winter 2015Next
Music in Durham brings you classical music listings, previews, reviews and news for Durham, with a bit of random blogging thrown in. The concert listing pages bring together classical music events from across the City and the University, so whether you’re looking for a great concert to go to, or if you’re planning something and want to avoid clashes, this is the place to look.
Menu
Twitter Facebook-f Envelope