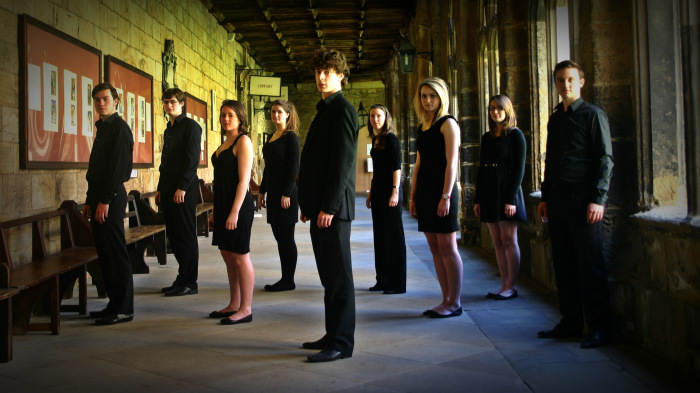 Hexham’s annual Festival of Music and Arts ended in style last night, with a candlelit concert in the Abbey, with music by Britten, Purcell and others, performed by a very fine group of young singers, accompanied on baroque instruments, and conducted by Martin Neary.

This is one of those reviews where I have to add huge caveats: the singers were Ben Rowarth’s choir, Renaissance many of whom are regular Durham Singers soloists. I help them a bit with their publicity and I had a free ticket to last night’s concert in exchange for lifts back to Durham. But the reason I help them is that they’re extraordinarily good, so I wanted to write about the concert anyway. So maybe best not to call this a review, rather a description!

The programme itself was not strikingly original; like so many other concerts in this Britten centenary year, it was built around the triangle of Britten, Purcell and St Cecilia, and included both Purcell’s Saint Cecilia Ode Welcome to all the pleasures and Britten’s Hymn to St Cecilia. There were some less familiar pieces too though: contemporary works by Macmillan and Harvey, and Britten’s Wedding Anthem Amo ergo sum which I think was new to most of the singers as well as the audience. It was written for the marriage of the Earl of Harewood and is more a cantata than an anthem, with short chorus movements in between long and demanding solos for soprano and tenor, sung here by Rowan Pierce and Hugo Hymas. The soloists presumably represent the married couple, but unfortunately, there was no text in the programme, and despite everyone’s best efforts, I couldn’t pick out many of the words. Britten’s word setting is always so effortlessly imaginative, and a bit of googling suggests that the words are lovely (I couldn’t find the actual text), so I felt as if I had missed something. The organ accompaniment has the same sort of exuberance as the Jubilate in C and the whole piece was a delight.

Throughout the evening, Martin Neary went for a rounded warmth that worked well in the candlelight; even the spikey cross-rhythms of Byrd’s Laudibus in sanctis were smoothed off. The opening of Britten’s Hymn to St Cecilia was mesmerising; instead of the hushed reverence of many performances, it felt relaxed and happy, with a lovely swing to it. Further warmth was added in the Purcell pieces by the four baroque string players and the rich tones of a theorbo.

In a pre-concert talk, Martin Neary spoke about the beauty to be found in dissonance, particularly drawing our attention to the passage “at the voice of the turtle” in Purcell’s My Beloved Spake and to Jonathan Harvey’s Thou mastering me God. The singers clearly relished this moment in the Purcell and the taut dissonances of Harvey’s work throbbed with intensity.

From the well-blended and disciplined ensemble singing came some exceptional solos. Hugo Hymas pours out sweetness every time he opens his mouth, and Rowan Pierce’s dazzling soprano voice gets richer every time I hear her. I also particularly enjoyed bass Daniel Tate and altos Sarah Johnston and Natasha Cutler in the Purcell works. And there was a very audible collective gasp of admiration from the audience at the end of MacMillan’s Christus vincit as soprano Camilla Harris held an eternally long, unwavering top B.

Appropriately on the eve of the feastday of the archangel St Michael, the concert ended with Britten’s Antiphon, written for St Michael’s college Tenbury. The text is a George Herbert poem in which angels and people alternate in their praise of God – with sopranos Camilla Harris, Charlotte LaThrope and Emily Burnett disappearing to the organ loft for some suitably angelic singing.

PrevPreviousETO Venetian opera
NextBrahms German RequienNext
Music in Durham brings you classical music listings, previews, reviews and news for Durham, with a bit of random blogging thrown in. The concert listing pages bring together classical music events from across the City and the University, so whether you’re looking for a great concert to go to, or if you’re planning something and want to avoid clashes, this is the place to look.
Menu
Twitter Facebook-f Envelope