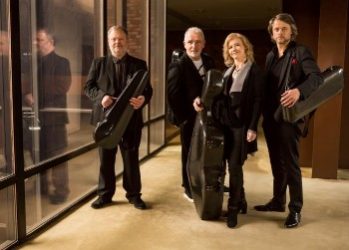 The Brodsky Quartet made their regular visit to MUSICON this evening, with an enchanting programme of Schubert, Shostakovich and Ravel. At first glance, this seems a somewhat odd mixture of composers, although if the Brodsky Quartet had been asked to design a programme for performance in my front room, this would have fitted the bill as it seemed perfectly designed to satisfy the varying musical tastes of my household!

Schubert’s Quartettsatz is a single movement jewel that marks the transition to his later style. There might have been more to come – a fragment of a second movement was written, but it doesn’t need it. The Brodsky Quartet started it very lightly, with a quiet buzz and a playful lift. There was a strong sense of yearning in the calmer second theme, with the underlying drama being chased away by each return of the lively first theme, lively and teasing.

Shostakovich’s Fifth string quartet briefly continued the playful mood before plunging into the dark intensity that pervades his string quartet writing, the genre where Shostakovich explored and expressed the emotions that were too dangerous for his more public works. The DSCH motif (D, E flat, C, B natural), a musical expression of Shostakovich’s initials that he uses throughout his music, repeats here, in a funny skipping rhythm, throughout the first movement, viola player Paul Cassidy using it to keep the mood nervous and watchful. In contrast, there’s a theme that feels like a child’s nursery rhyme, which the quartet’s new first violinist Gina McCormack played with warmth and sincerity, and eventually floating it away into nothing.

There was peace, of sorts in the second movement, after a tense game of who-blinks-first between the first violin and viola that was resolved only by the lyricism of Jacqueline Thomas’s cello theme. A lovely solo by second violin Ian Belton led off the final movement; there are suggestions of klezmer melody in the tune, and Belton made it feel like a sad, weary memory of a dance, until the viola perks things up and the music started to make me think of drinking beer on hot, dusty summer evenings in Moscow before the quartet came to an enigmatic end, fizzing out into nothing at the top of the violin register, and a long, stunned silence.

After the interval, Ravel’s only string quartet relieved the tension, and took us gently away from the nervy terrors of the Soviet Union to a sunnier place of languid sensuality. The dreamy slow passages shimmered with light, casting a beguiling spell. The gently ambling third movement in particular could easily sound boring, or lacking direction, but here, it drifted peacefully along, always sure of its destination but in no hurry to get there. The pizzicato theme in the second movement was both rich and lively, suggesting exotic and unfamiliar instruments, and the memory of it smouldered away under the gentler bowed theme. Ravel’s teacher, Fauré thought the final movement was stunted and badly balanced, but Debussy insisted it should remain unchanged. It does comes as quite a jolt after the third, but it’s a great way to end a concert programme; it’s playful, bravura music and the Brodsky Quartet simply sparkled in it. It was the sort of ending that made me want to jump up and shout bravo (although I didn’t, so I’ll say it here instead).

The Brodsky Quartet returned to Shostakovich for their encore, although a world away from his feverish string quartets: their own arrangement of one of his pieces for two violins and piano was soothing and nostalgic, cooling things down after the passionate Ravel. 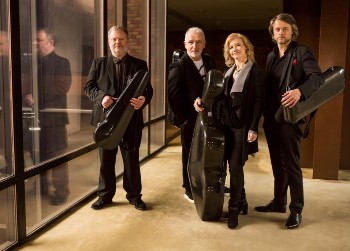 PrevPreviousThe EXAUDI Italian Madrigal Book
NextRecorders at UshawNext
Music in Durham brings you classical music listings, previews, reviews and news for Durham, with a bit of random blogging thrown in. The concert listing pages bring together classical music events from across the City and the University, so whether you’re looking for a great concert to go to, or if you’re planning something and want to avoid clashes, this is the place to look.
Menu
Twitter Facebook-f Envelope