Why we need our National Music Service 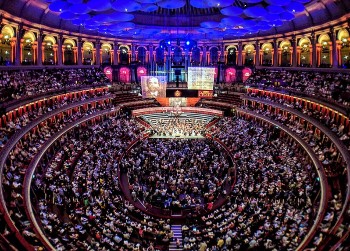 How do we justify the existence of a radio station that just 3% of us listen to, but everyone pays for? A few musings on classical music and the BBC.

‘Beauty is an integral element in the whole life and cannot be isolated as a special privilege for the aesthetically initiated’ it is a primary need of all’.

By happy chance, I came across this quote by the architect Walter Gropius on the same day that my social media bubble was full of outrage about plans reported in the press to cut back the BBC and make it fund itself through subscriptions. Although Radio 3 and Radio 4 were apparently to be protected, it seems somewhat unlikely that they would remain unscathed, and there was no word at all about what might happen to the BBC’s wider classical music activities: the orchestras, the choirs, the Young Musician competitions and the New Generation artists scheme, and the world’s biggest classical music festival, the BBC Proms.

My first thoughts on reading the news about the licence fee was horror at what this could do to our national cultural life, followed by a warm sense of gratitude that, at least for the moment, we have all this. I tweeted about it, and watched the ‘likes’ rolling in from my twitter bubble. But this was followed by less comfortable thoughts, prompted by a comment on twitter by the writer Richard Bratby, who wrote

If (as we should be) we’re planning a big spirited defence of BBC orchestras, could we all have a collective sit down & think through some non-patronising ways of trying to persuade people who do not already agree with us? I appreciate that this is not our forte. But still…

I could happily live without television as long as I get my classical music toys, but how much more is the opposite true? Although there has been some celebration over a rise in listeners for Radio 3, helped, I suspect, by the breakfast team cannily marketing the show as an alternative to the political bloodbath served up on Today, the latest figures for Radio 3 are still only 2.13 million people – that’s 3% of the population. Why should everyone else be expected to fund our pleasures? We can make the argument about how vital music and art are to enriching human existence; we can cite the statistics about how many jobs BBC music generates; and we can talk about the wider effect on Britain’s image abroad, but as recent political events have shown us, what we think are solid arguments built on facts turn out to be translucent and fragile, blown away in the gales of thoughtless populism. In a world where people are willing to ignore facts and vote for things that directly threaten their own jobs and the wellbeing of their own communities, how do we convince anyone that their money should be used to protect other people’s jobs, let alone the more lofty ideals of a cultural world that means nothing to so many? Even if the current scare about BBC funding turns out to be nothing, it’s still a question we should be answering, because it raises wider discussion about how we, as a society, respond to music, and this brings me back to Walter Gropius.

Walter Gropius aspired to bring beauty into everyday life by creating it in functional buildings such as factories and apartment blocks, generously surrounding people with pleasant environments. There are challenges in doing the same with music; it’s harder to inject it into everyday surroundings, and the ear needs more time and concentration to appreciate any type of music. I certainly have no firm answers to how we can spread the word about beautiful music, and I know how incredibly difficult a job it is to build new audiences for classical music, but I have a few idealistic thoughts about things that would happen if I had a really massive magic wand, and a few things that perhaps we should think about.

A lot of discussion about the future of classical music comes down to the pressing need for more music education, and of course that’s vitally important, and children should be given every possible opportunity to make music.  But in my children would come to their formal musical education already having some familiarity with the sounds of classical music, so that they don’t have preconceptions about it being something different, something special or walled off. I’d have good music playing in nurseries and reception classes, not with some sort of artificial ‘baby Mozart’ idea that classical music makes children more intelligent, it would just be there without any fuss, just part of their lives, so that later on, learning about how music works feels as natural as learning to read, paint or do maths. (I told you it would be a big magic wand).

On a slightly more realistic note, I suspect that most of us who live and breathe classical music need to be much more welcoming to anyone who shows signs of wanting to peer over the rather forbidding wall of our garden. It’s easy to be depressed when we see concerts full of popular classics pulling in the crowds, especially this year when Beethoven is providing a financial windfall to many organisations, but they pay for the more obscure or ‘difficult’ repertoire and keep our orchestras and concert houses going. That cross-over singer we all love to sneer about who butchers great opera arias? The ‘relaxing classics’ mixes, with Renaissance polyphony packaged as soothing aural wallpaper? At least people are listening, and some might be tempted to explore further, to move from one miked-up aria to a complete opera, or one snippet used in an advert to the complete symphony.

We also need to get away from the idea that you need a vast amount of specialist education to appreciate classical music ‘properly’, and all of us who write about music for a general audience in any way need to ask ourselves continuously ‘does my reader need a degree in music to understand this?’ I’m totally rubbish at keeping track of structures and following harmonic progressions and relationships between keys, but that doesn’t stop me enjoying things. I might have a deeper intellectual engagement if I could trace every structural detail of a sonata form symphony movement for example but it doesn’t stop me enjoying a piece – just like I can look at a painting and enjoy it without any knowledge whatsoever of artistic technique. That’s what’s so miraculous about the human brain: it doesn’t need to understand beauty to have a deep response to it.

The same goes for complaints that Radio 3 is ‘dumbing down’. A few decades ago, it was famously esoteric, but hat was  a time when for many people recordings were expensive and hard to come by, and Radio 3 was probably the best way you could hear complete performances of symphonies or opera or hear unusual repertoire, for no cost. But now, if you want three hours of Harrison Birtwhistle, or an entire Vivaldi opera over your cornflakes, you can do that with Spotify. If, as I conjectured earlier, the breakfast programme is many people’s route into Radio 3, then I think the presenters, Petroc Trelawney and Georgia Mann are doing a great job of welcoming new listeners and making them feel at home, doing exactly what the BBC charter asks – inform, educate and entertain. They play pieces that have links to concerts that are being broadcast; they link pieces of music through a common theme; they actively engage with their listeners via social media and email; and they add interesting snippets of background information or context that is informative without being earnest or patronising. I don’t hear Essential Classics, which follows, but I get the impression that they build on this idea too. Personally I don’t much like way Jess Gillam and her guests talk over the music on ‘This classical life’, but I can see that her enthusiastic and engaging discussions with other young musicians about the music that drives them can only be a good thing.

Finally, and this comes back a bit more specifically to the current BBC situation, I’d love to see more links between different stations and genres. Local radio and the other national music channels are under an even bigger threat than Radio 3, and it would be great to see this as an opportunity to mix up genres a bit more, with the implication that is has to be reciprocal – we can’t expect to get ‘our’ music heard by a wider audience if we’re not going to welcome equally good quality music from other genres into our own space. I was also thinking about how we need to break down that rivalry between music and sport that begins at school when children have to choose between being on the football team or playing in the orchestra, only to see that Sport Relief this year is doing exactly that with their Beethoven 5K project.

It’s a tough job. We have to battle against stereotypes and, even worse, sheer indifference, to convince the world that good music is not an elitist luxury, but something for everyone. The tragedy is that if we lose the BBC’s classical output, our National Music Service, free at the point of use for anyone who wants it, then classical music becomes even more a special privilege that only the rich can afford. We’ve got seven years to save it.

How do we justify the existence of a radio station that just 3% of us listen to, but everyone pays for? A few musings on classical music and the BBC.

PrevPreviousEXAUDI: Cruel ecstasy
NextFeuertrunken – A weekend of BeethovenNext
Music in Durham brings you classical music listings, previews, reviews and news for Durham, with a bit of random blogging thrown in. The concert listing pages bring together classical music events from across the City and the University, so whether you’re looking for a great concert to go to, or if you’re planning something and want to avoid clashes, this is the place to look.
Menu
Twitter Facebook-f Envelope