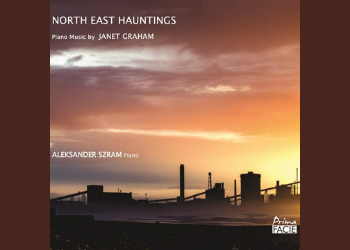 This new recording by Aleksander Szram is a fantastic introduction to the music of County Durham composer Janet Graham.

The music of Janet Graham, who lives near Durham, is deservedly being brought to a wider audience, thanks to a new recording of her piano music by Alexander Szram. Janet Graham grew up near Consett, and studied composition with James Iliff at the Royal Academy of Music from 1966-71, where she clearly held her own in a formidable class that included Michael Berkley and Brian Ferneyhaugh: she won several prizes and was later selected for the BBC Young Composers Forum. Sadly the struggles faced by so many female composers largely silenced her, and she took up a career as a music therapist until she resumed composing after retiring.

I first encountered Janet’s work when she invited the Durham Singers to give the first performance of a choral piece, ‘The Light’, setting a poem by one of her patients. It was musically demanding, but written sympathetically for voices, so that when learning it I felt that none of its challenges were insurmountable, and the effort seemed worthwhile. It was beautifully constructed and spoke thoughtfully about the text that she was setting.

After singing ‘The Light’ and finding out more about Janet and her career for writing concert publicity, I was keen to hear more of her music, so I was delighted when I heard about this new CD, and very grateful when she sent me a copy. The piano music on this recording shares some of the characteristics of ‘The Light’ in what is clearly a distinctive compositional voice – dense clusters of notes, interspersed with delicate patterns of light, and with fragments of quotation to enhance the flavour. It’s mostly atonal, but she uses the lack of a defined key very cleverly, creating a feeling of unrooted freedom as the music ranges restlessly across the entire keyboard: I’d hazard a guess that every note of the piano occurs somewhere on this recording.

The two sets of programmatic pieces give me an easy route in to describe the music in more detail. A trio of earlier works on this CD, written in the early 1980s give life to three women from Greek mythology: Persephone, Iris and Hecate. A single strong line arches through a delicate spray of water droplets at the beginning of ‘Iris’, whilst ‘Hecate’ gets quiet, tender music that is full of moonlight and enchantment. ‘Persephone’ begins deep underground with relentless mechanical rumbles that make me think that this is a Durham Persephone, condemned to live in a coal mine: a few chinks of light break through as single high notes, becoming stronger as Persephone journeys back up to daylight.

The forgotten corners of the North East come to life more explicitly in the title track ‘North East Hauntings’. The hauntings here are the ghosts of heavy industry: the traces of slag heaps and broken pit-top buildings half-hidden under nature reserves; the warehouses converted to fashionable office space; the memories of iron and steelworks and the communities broken by their loss. In ‘Sea Mist’, impenetrable chords part briefly to let through snatches of a folk song, ‘Lullaby for lost landscapes’ is tantalisingly brief: an angular melody set to a lilting rhythm  fades into another folk tune, gently distorted by startling harmonies. ‘Red Dust’ recalls the detritus from the Consett ironworks swirling around in the winds that come off the moors and settling in every corner then rising up in little eddies.

In the liner notes, Janet writes that she often composes at the piano and consequently writes music that can be played with small hands. Small hands but not small minds, as some of it sounds technically very difficult, such as the lengthy trills in the first movement of her 1985 Sonatina or the Scherzo in the same piece that hops and pecks its way up and down the keyboard like a curious bird. Her writing is always intelligent too: very complex music sometimes has a whiff about it of the composer just wanting to show off, but you never, ever feel that here.

Some of the pieces on this recording were written for and first performed by Anthony Green, who was Aleksander Szram’s teacher, so there’s a nice continuity here, along with a deep and careful consideration of what the music wants to say. Throughout the recording, I’m struck by the way that Szram skillfully separates the multiple voices in the music, giving each line its own distinct colouring and clarity.

Listening to Janet’s music is not so different from my experience of performing it: it needs a bit of work and thought, but the end result is deeply rewarding.

This new recording by Aleksander Szram is a fantastic introduction to the music of County Durham composer Janet Graham.

PrevPreviousBadinage: Voice of the Bridge
NextJane’s autumn music guide 1 – orchestrasNext
Music in Durham brings you classical music listings, previews, reviews and news for Durham, with a bit of random blogging thrown in. The concert listing pages bring together classical music events from across the City and the University, so whether you’re looking for a great concert to go to, or if you’re planning something and want to avoid clashes, this is the place to look.
Menu
Twitter Facebook-f Envelope