Badinage: Voice of the Bridge 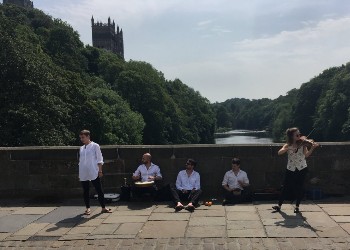 The Pont Neuf becomes a musical thoroughfare, conveying the gossip and politics of 17th century Paris in this absorbing performance by Badinage.

We are a city that understands bridges; Framwellgate, Elvet, Prebends, Mliburngate, Kingsgate – they’re the vital arteries of Durham, gateways to the city; places where we arrange to meet people; where we stop to enjoy the view and watch the boats; they’re where the buskers perform and the religious enthusiasts hawk their faith. And whenever I walk through Durham late on a Saturday night, it’s when the narrow streets open out onto the bridges that the usual drunken riot seems to intensify, thrown into sharp contrast against the spectacular backdrop of river, castle and cathedral. This evening, as I walked through town to Hild Bede in the sultry summer heat, the rowdiness seemed to be particularly bad, but it turned out to be a fitting prelude to ‘The Voice of the Bridge’, performed by the early music specialists who make up the group Badinage.

They took us to another bridge, another city and another century: the Pont Neuf, Paris, the 17th century, telling us in a seamless presentation of music and narrative about the people who crossed that bridge, and those who made and lost their lives around it. Although part of an academic project, this was an evening that definitely worked on the mantra of novelists: ‘show don’t tell’, giving us vivid snapshots of the streets of Paris where news and gossip were passed on – and preserved for us – in popular songs. We heard first about a scandalous collection of stories found in a dusty archive: these writings were in fact songsheets, and tonight’s music drew on that collection.

Between them, the five musicians of Badinage have an impressive background and regularly appear with leading period instrument ensembles, but currently at least, the starriest name on the line-up is mezzo Katie Bray who just over a week ago was singing to millions across the world as she represented England in BBC Cardiff Singer of the World, and where she won the Audience Prize. Now she was close up in a small room enthralling us with these stories from the bridge. My French is nowhere near good enough to follow ribald 17th century street slang but she was so compelling, with so much expression and colour that I felt as if I understood every word.

The underlying theme that drove the songs in Badinage’s programme was the world of double-standards and hypocrisy that separated the court and the street. Passing nobles were mocked in song for their shamelessly lewd behaviour, whilst ordinary people suffered terrible punishments for doing the same thing. As the Prince de Condé and his lover the comte de Guitaut crossed the bridge, we heard a ribald song with Bray spitting out a stream of probably very juicy text, but in a poignant sequence, this was followed by a description of the gruesome execution of Jacques Chausson, who had his tongue ripped out before being burned at the stake for sodomy. Voiceless, and on her knees Katie Bray hummed a lament, to a simple and almost inaudible pizzicato violin accompaniment played by Naomi Burrell.

The performers drew us into the world of the bridge, moving amongst us, playing or singing to individuals and handing out song pamphlets. During some of the livelier passages, Bray or wind-player Leo Duarte clambered onto chairs, and as they reared above us, still playing and singing, I had the sense that we ourselves were part of the bridge as they were danced on the parapets above us.

Court and street merged not just in the stories but in the music too. The street songs were interspersed with the highly polished and elegant style of the high French baroque, the music of Versailles. To me, this music often feels a little mournful, as if it’s conscious of the moral emptiness that lay behind the glitter, and the polished tone of Leo Duarte’s oboe, along with the context in which we were hearing the music definitely brought out this darker edge. In a particularly enjoyable sequence, we were asked to imagine the composer Lully crossing the bridge and hearing the street musicians playing one of his tunes. He jumps out, tells them they’re playing at the wrong speed, but the spirit of the bridge takes over and before long his own elegant opera aria has morphed into a raucous song filled with innuendo about Lully’s own personal life. The regular dull argument about musical genre and the supposed validity of one over another surfaced yesterday on my twitter feed again, so it was refreshing to see ‘popular’ and ‘art’ music flowing into each other here as the Seine rolls onwards underneath the Pont Neuf, carrying its tunes and its stories.

If you want to hear some of the music, or find out more about the songs and music, visit the Cambridge University Parisian Soundscapes project website parisiansoundscapes.org/

The Pont Neuf becomes a musical thoroughfare, conveying the gossip and politics of 17th century Paris in this absorbing performance by Badinage.

PrevPreviousDUOS A Symphonic Journey
NextNew recording: Janet Graham – North East HauntingsNext
Music in Durham brings you classical music listings, previews, reviews and news for Durham, with a bit of random blogging thrown in. The concert listing pages bring together classical music events from across the City and the University, so whether you’re looking for a great concert to go to, or if you’re planning something and want to avoid clashes, this is the place to look.
Menu
Twitter Facebook-f Envelope