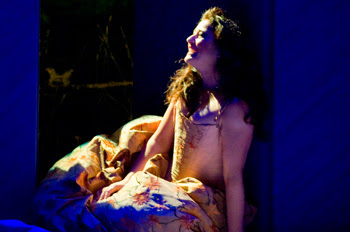 A preview of English Touring Opera's Ottone which comes to Durham in November, and in which I get to write about two of my passions in one go - Handel opera and Byzantine history.

An all-star cast, inflated fees and tickets changing hands at five or six times their face value: the events surrounding the first performance of Handel’s opera Otttone in 1722 sound all too familiar, reminding us just how much modern musical culture owes to the life of eighteenth century London. According to John Gay (hopefully with a large dose of irony), the castrato Senesino, who sang the title role, was “daily voted to be the greatest man that ever lived” and the theatre management were exasperated by the disorder coming from the over-excitable crowds in the cheap seats.

Senesino’s opposite number, in the role of Theofanu, was the star Italian soprano Francesca Cuzzoni who was making her much-anticipated London debut. During rehearsals, she famously tried to demand that Handel change her first aria, “Falsa imagine” for something new and written specially for her – presumably wanting something showier for her first moments on the London stage, but Handel was not a man to be bossed about by sopranos: “Madame”, he reportedly said, “You are a veritable she-devil, but you should know that, as for me, I am Beelzebub, chief of all the devils”, and then made as if to throw her out of a window. (I’d love to go for a beer with Handel). “Falsa Imagine” stayed in, and became the opera’s biggest hit – Cuzzoni herself acknowledged Handel’s better judgement by frequently including it in her concert recitals.

At the same time, another member of the cast, the contralto Anastasia Robinson, who was cast in the angry role of Matilda, was also quietly getting her friends to petition Handel for some gentler music that would better suit her soft voice, and she in fact succeeded where Cuzzoni had failed, as Handel did make some changes for her (he was a man who clearly had a lot of time for altos).

During Handel’s lifetime, Ottone was the second most-performed of his operas (after Rinaldo), and its success, followed by that of Giuilo Cesare the following season, gave him the means to move into the house in Brook Street that he occupied for the rest of his life. and which now houses the absolutely charming Handel House Museum. Today though, the complete opera has fallen into neglect, although its best numbers, including Falsa Imagine find their way into the endless Handel aria collections, but it’s this season’s Handel pick for English Touring Opera, coming to Durham on 5 November (details via the link below).

I suspect that part of the reason it’s not performed that often is that the plot really is ridiculously contrived, even by baroque standards, despite only having six characters. In a nutshell, things go something like this. Ottone (based on the German king Otho II – not to be confused with the Roman character of the same name in Agrippina etc.) plans to marry the Byzantine princess Theofanu and succeed to the throne of Italy. Theofanu has seen Ottone’s potrait and is keen on the idea of marrying him. A rival claimant, Adelberto, egged on by his mother, presents himself to Theofanu, pretending to be Ottone. Distraught that “Ottone” doesn’t look anything like the portrait, Theofanu sings Falsa Imagine.

Meanwhile, Ottone has defeated the pirate Emireno in battle and arrives in Italy with his prisoner, who gets a good rage aria, in which he hints that he’s not really just any common pirate.

Adelberto’s fiancée, Matilda, furious at being jilted in favour of Theofanu warns Ottone about the plot, and Adelberto is forced to face Ottone in battle. Thereafter, things get complicated – Adelberto and Matilda are reconciled, she helps him escape from prison, but various ambiguous encounters and misunderstandings ensue between Adelberto, Matilda, Theofanu and Ottone, ensuring that everyone gets upset and thinks their beloved is after someone else. The revelation of the pirate Emireno’s true identity only adds extra complication. All this mess gives Handel an excuse to write a mixture of gorgeous laments and furious rages until everything is sorted out.

The weaknesses of the plot mean that the opera doesn’t seem to offer the psychological exploration and rich characterisation that we enjoy so much in some of Handel’s other operas, although my impression may be different when I actually see it staged, and its initial success was perhaps due as much to the starry cast and the general fever for opera rather than any profound judgement. But, as these examples show, it’s full of great tunes; and English Touring Opera have no reservations about cutting out some of the excesses of baroque opera to produce a good evening’s entertainment. Their Agrippina was one of the best things I saw last year, and it’s no secret about how much I love Handel, so I’m very excited about this.

So, to conclude, here are a couple more of my selections. Here’s Matilda on splendid form, letting rip at Ottone’s initial refusal to pardon Adelberto:

And the great Lorraine Hunt Lieberson as Adelberto’s grieving mother Gisimondo, distraught at her son’s distress:

And finally, here’s the opera’s hero himself, Ottone, at the beginning of Act 3, thinking that everyone has abandoned him:

As a final aside, one of my other little passions is Byzantine history, so I looked up the true story of Otto II and Theophano. It doesn’t bear much resemblance to the opera, but is an interesting enough story in its own right. In return for various territorial concessions in the disputed territory of Italy, the German King Otto I had been promised a real Byzantine princess for his teenage son, Otto II. Theophano, aged just sixteen, was duly packed off to Rome to marry a man she’d never met, whose language she didn’t speak and whose culture was completely alien to her. When she arrived in Rome, it turned out that she wasn’t quite the real royal-born princess that Otto had been promised, but he and his father took the pragmatic, diplomatic approach and the marriage went ahead. Her new German family treated her kindly, and allowed her to retain her Byzantine traditions and she, in turn put her intelligence and effort into maintaining unusually good relations between the two rival European empires. Someone should write an opera about her….

A preview of English Touring Opera's Ottone which comes to Durham in November, and in which I get to write about two of my passions in one go - Handel opera and Byzantine history.

PrevPreviousFly me to the moon
NextGuest post: Rob Barnes reviews Durham SingersNext
Music in Durham brings you classical music listings, previews, reviews and news for Durham, with a bit of random blogging thrown in. The concert listing pages bring together classical music events from across the City and the University, so whether you’re looking for a great concert to go to, or if you’re planning something and want to avoid clashes, this is the place to look.
Menu
Twitter Facebook-f Envelope