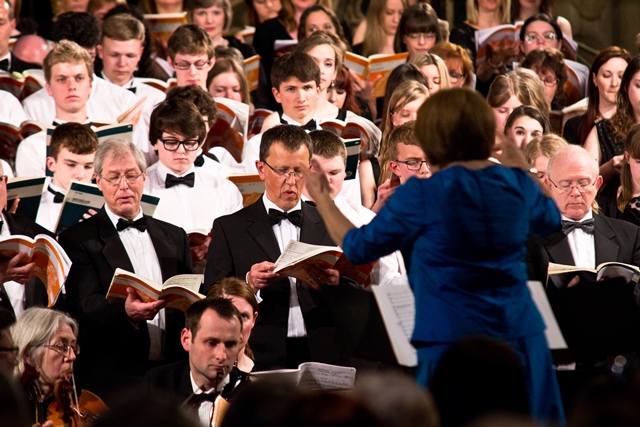 Past and present members of Durham County Youth Choir gave a magnificent performance of Handel's Messiah in Durham Cathedral to celebrate their 50th anniversary in an evening that showed what a vital role the choir plays in music education in the North East. Read my review here:

Durham County Youth Choir was set up in 1964 with the purpose of bridging the gap between school and adult choirs and to introduce young people to choral singing whilst also providing high quality music training. The success of that vision was clear for everyone who was in Durham Cathedral last night for the choir’s 50th anniversary celebration performance of Messiah. The programme biographies of the alumni soloists with impressive musical careers that began with DCYC told part of the story, and so too did the number of adult faces that I recognised from the current Durham singing world. The achievement of high musical standards was evident in the quality of the singing, but the true testament to the choir’s success lay in the broad smiles across every single face in the chorus, and the evident emotion displayed by some of the alumni soloists.

Under the direction of Hilary Ions, the chorus delivered an expressive and well-rounded sound. The fast choruses were taken at a sensibly steady pace for the size of the choir and building, thus ensuring that the long semi-quaver runs retained crispness and definition. As you would expect from such an occasion, the loud choruses were bursting with excitement but what was just as impressive was the choir’s thoughtful shaping and dynamic contrasts in the quieter movements. The unaccompanied passages of Since by man came death were reverently hushed but still rich, and His yoke is easy tripped out with surprising lightness for such a large number of singers. Surely he hath born our griefs had beautifully shaped dynamics and was coloured with an urgency that, to me, brought new meaning to that particular chorus.

The solos were divided between sixteen singers, all of them stepping out from the chorus, and in themselves they gave an interesting snapshot of the musical grounding provided by the choir. Some have gone on to have professional singing careers; others have followed musical careers in teaching or administration, whilst others have clearly continued to develop and enjoy their love of choral singing whilst working in other fields.

Among the soloists were three members of the current choir, taking small but impressive recitative solos. Bass Hugh Morris from Framwellgate School, who is still only in year 11, delivered Thus saith the Lord of Hosts with power and conviction, and showed great control throughout the long and tricky runs in the “shake the nations” passage. Sixth-form tenor Daniel Robson from Hermitage Academy delivered All they that see him with exciting power and expression. Soprano Katie Button, also a sixth-former from Hermitage Academy, has a lovely clear, light voice and she was poised and radiant throughout the angel recitatives. All three show great promise and I hope to hear more of them.

The adult soloists were excellent, and all were well matched to their allocated arias. Among my personal highlights were alto Helen Bruce’s But who may abide, for her big contrast in that aria’s two very different sections, and her gradual build-up, saving some of her fire for a really exciting final page. Soprano Elinor Chapman was bursting with happiness in How beautiful are the feet and beautifully light and nimble in Thou art gone up on high. I also really enjoyed tenor Mark Anyan’s smooth golden sound and aching sadness in what are perhaps the darkest passages of Messiah – the aria Behold and See and its surrounding recitatives. The aria that lies at the oratorio’s spiritual heart, I know that my Redeemer Liveth was sung by Joanna Burton with golden warmth and great depth of feeling.

Accompanying the choir was an orchestra made up of staff from the Durham Music Service – a nice opportunity for the school children in the choir and audience to see their teachers performing. Hilary Ions took the opening Sinfony with a stately dignity that set the atmosphere nicely and maintained a good balance between a fairly small orchestra and the big choir. The strings were glowing and the cellos in particular gave lots of depth and character to their line. Mike Walton delivered a sparkingly staccato trumpet line sprinkled with a few nice ornaments to accompany founder member Ian Gray in The trumpet shall sound.

The care and expressiveness that Hilary Ions gave to the choruses meant that there was room for a big expansion of sound in the loudest moments, and somehow the choir saved enough energy to let the final chorus swell to a truly magnificent final Amen. I don’t think I have ever heard Hallelujah sung with such vibrancy and excitement and as I stood there in the full cathedral, hearing this great celebration, I’m sure I wasn’t the only person with serious goose-bumps.

Congratulations to all members, past and present, of Durham County Youth Choir. The organisation is a shining example of music education at its best, and I wish them all the best for the next fifty years.

Past and present members of Durham County Youth Choir gave a magnificent performance of Handel's Messiah in Durham Cathedral to celebrate their 50th anniversary in an evening that showed what a vital role the choir plays in music education in the North East. Read my review here:

PrevPreviousDo you remember your first Messiah?
NextBaroque ornamentation workshopNext
Music in Durham brings you classical music listings, previews, reviews and news for Durham, with a bit of random blogging thrown in. The concert listing pages bring together classical music events from across the City and the University, so whether you’re looking for a great concert to go to, or if you’re planning something and want to avoid clashes, this is the place to look.
Menu
Twitter Facebook-f Envelope