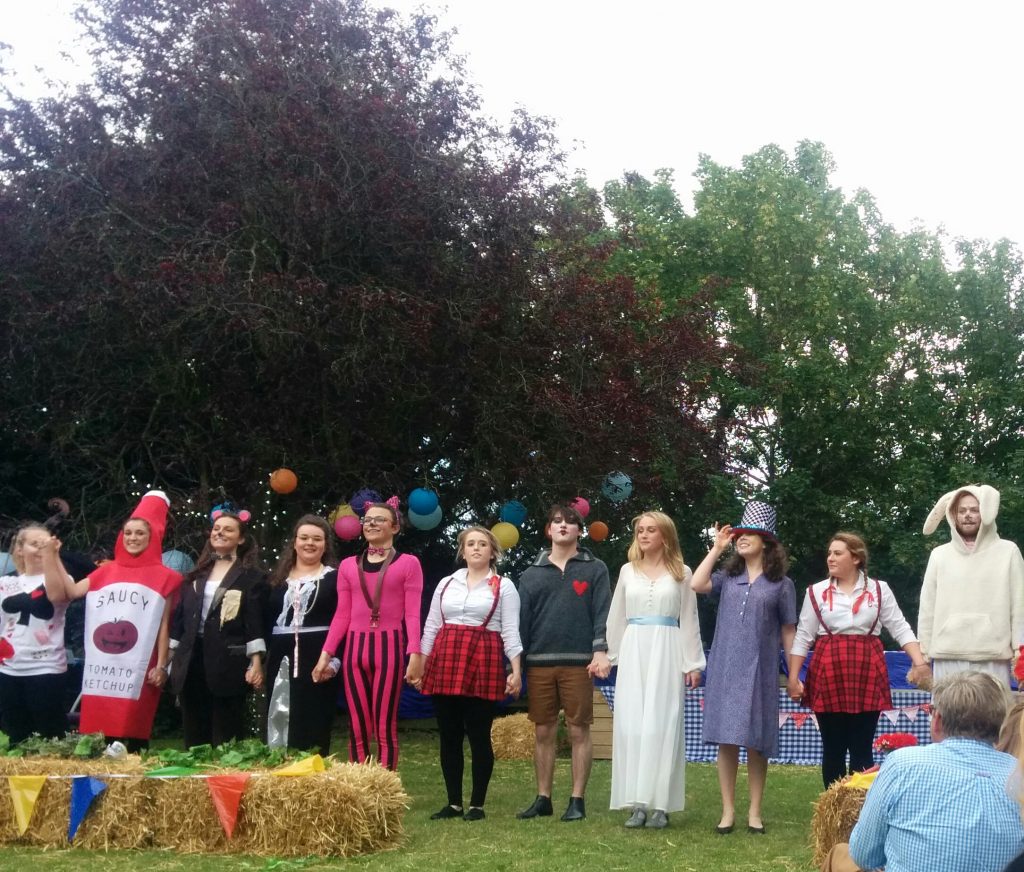 A riotously fun production of Will Todd's jazz opera, Alice in Wonderland, performed in the gardens of St John's College by Durham Opera Ensemble. There are two more performances and the weather forecast looks good, so grab a picnic rug and get a ticket.

It seems that Durham Opera Ensemble have spent most of this year living in a dreamworld. First it was Britten’s A Midsummer Night’s Dream for their major production in February, and now for the summer, a riotous jazz retelling of Alice’s Adventures in Wonderland, by Durham-born composer Will Todd. Alice was commissioned by Opera Holland Park, who have made it a key part of their summer repertoire, performing it annually since 2013. Like OHP, Durham Opera Ensemble staged their performance outdoors, on the Library Lawn at St John’s College, under trees decked out with fairy lights and coloured paper lanterns.

Will Todd’s Alice is a story inspired by Lewis Carroll, rather than trying to retell the original. Librettist Maggie Gottlieb has taken the familiar characters and quite a few of Carroll’s best lines, and woven a new story, in which the Queen of Hearts has become a brutal dictator, who press-gangs the inhabitants of Wonderland into her jam tart factory. Alice, of course, saves the day, and instead of the threatened executions, the whole thing ends with a tea party.

DOE put together a strong cast, and it was good to see a large number of freshers amongst them, including Lydia Marshall in the title role. Marshall’s Alice was both sweetly innocent and fiery; initially confused to find herself in Wonderland, and projecting wide-eyed amazement in her first numbers, but quickly taking charge of the situation. Her completely unaccompanied recitative about falling down the hole was well-sustained, and the opera’s big number, the aria I flew high in my dreams was sweetly entrancing. This was an impressive debut.

Director Alabama Jackson put together a highly energetic, physical performance to match Todd’s vivacious score, and there was some great dancing, particularly from the quartet, dressed as playing cards, who provided narrative interludes. Among the inhabitants of Wonderland, I particularly enjoyed counter-tenor James MacTavish’s slinky Cheshire Cat, and Hannah Ambrose’s colatura in her brief appearance as the diva Bottle. Cooling everything down, Jeremy Cowen was fabulously laid-back in the role of Caterpillar, blowing bubbles from a pipe, and growling away like a true-born blues singer, particularly when he led the cast in the ensemble factory scene, with its strong gospel flavour.

Catherine Bench as the Mad Hatter and Hannah Cox as the Duchess both have slightly bigger voices than some of the other cast members, and both used them to great effect in very stylish performances, with Cox being notable for her strong engagement with the audience. Tenor Cameron Gergett had a fantastic costume for the Queen of Hearts, all pink satin and a huge black wig, and he was clearly having a lot of fun as he stalked around acting the dominatrix. Chris Knight, was wonderfully unhinged as the White Knight, whilst Tarquin Strickland was touchingly bewildered and nervous as the White Rabbit, singing with lyrical sadness when he tells Alice about how all is not well in Wonderland.

The opera is accompanied by a small jazz orchestra and I’m sure is the only opera I’ve seen that requires an accordion – played with flair by Becki Smith. Louis Clayden accompanied the Caterpillar with a fine trumpet solo, Ed Clarke had a spirited keyboard solo for the Hatter and Duchess’s love duet and the full ensemble added drive and passion to the dance numbers. This light ensemble worked well outdoors, as it meant that the voices were able to carry well, and with clear delivery of the text, despite competition from the cathedral bells throughout the first act and high winds all evening. The weather nearly sent us indoors when it started raining during the interval, and I could see Musical Director Josh Ridley consulting earnestly with Alabama Jackson, but they made the right decision to stay outside, because it would clearly need more than a few drops of rain to dampen down this infectious and highly entertaining production.

A riotously fun production of Will Todd's jazz opera, Alice in Wonderland, performed in the gardens of St John's College by Durham Opera Ensemble. There are two more performances and the weather forecast looks good, so grab a picnic rug and get a ticket. 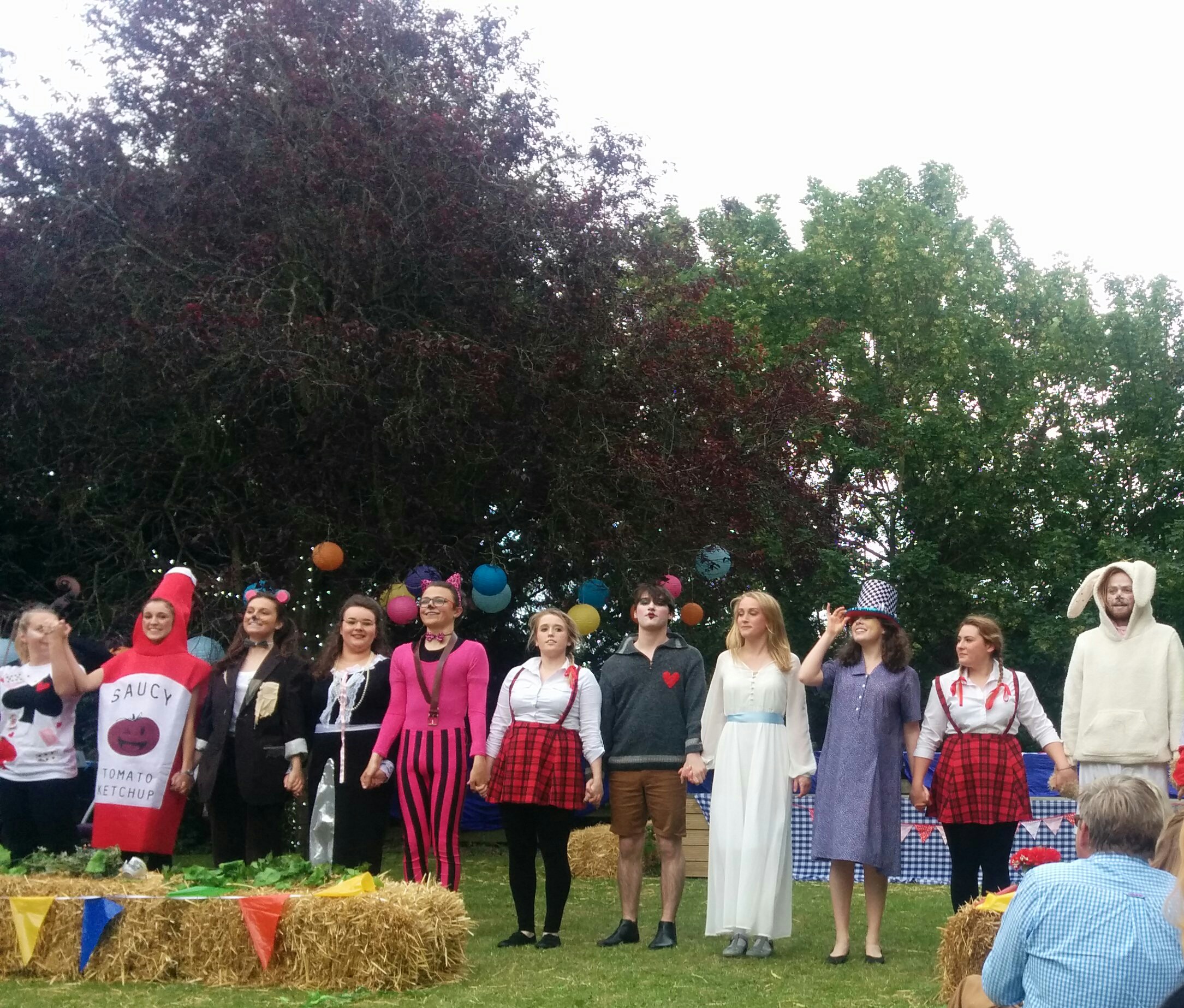 PrevPreviousPraise the God of Brass
NextNorthern Spirit Singers – a Northern Summer concertNext
Music in Durham brings you classical music listings, previews, reviews and news for Durham, with a bit of random blogging thrown in. The concert listing pages bring together classical music events from across the City and the University, so whether you’re looking for a great concert to go to, or if you’re planning something and want to avoid clashes, this is the place to look.
Menu
Twitter Facebook-f Envelope