DUCC: A Boy was Born 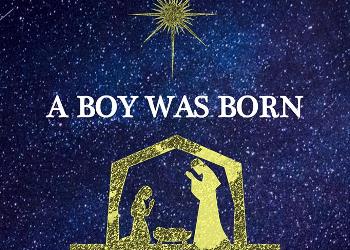 A beautifully sung and well-chosen programme of 20th century and contemporary music for Advent and Christmas from DUCC.

The “O Antiphons” are a set of seven very early Christian texts, that use different titles given to Jesus in Isaiah’s prophecies. Traditionally they were sung during the seven days leading up to Christmas, but now they appear threaded through Advent carol services, sometimes as plainchant, or sometimes in their famous English paraphrasing, the hymn “O Come, O Come Emmanuel”. In 2012, Merton College Oxford commissioned seven composers to write a new choral setting for each of the O Antiphons for their chapel choir, and the first half of tonight’s concert by Durham University Chamber Choir at St Godric’s church was created around these settings.

As these pieces were written for a high-quality student choir, they were perfectly suited to the voices of DUCC. John Tavener’s O Adonai began with an angular soprano line, full of awkward-sounding intervals, a sort of nightmare plainsong, but the sopranos glided confidently through it. The O Radix Jesse, set by Latvian composer Rihards Dubra, had a distinctly Orthodox flavour to it, which the choir captured with warm, radiant singing, and the ornamented line of Gabriel Jackson’s O Clavis David came across very cleanly. Cecilia McDowall’s O Oriens was magnificent, with laser-sharp tuning and focussed singing that meant the scrunchy harmony really tingled, and I very much enjoyed alto Joy Sutcliffe’s legato line in her solo of Ešenvalds’s O Emmanuel.

Between the antiphons came a very well-chosen selection of other advent and Christmas pieces, all by twentieth century or contemporary composers. Britten’s Hymn to the Virgin was beautifully shaped by conductor Theo Golden: slow and spacious for the first verses, and suddenly powering ahead on the final verse. Perhaps because I know the piece very well, I was particularly alert to the way Theo Golden conducted Sally Beamish’s In the stillness, in which he and the choir created a magical feeling of anticipation.

Three carols by Peter Warlock gave us the oldest music in the programme. Benedicamus Domino was fast and flowing; each verse seemed to be a single exhalation of breath until Theo Golden pulled things up at the end. The choir created a nice narrative in Adam lay ybounden, beginning with a crystalline solo from soprano Rosanna Wicks. Judith Bingham’s haunting The Darkness is no darkness, is a piece full of ambiguity: the text celebrates the light of God, but for the most part the music itself seems mired in darkness, with just Stephanie Devlin’s cool, well-sustained solo letting in chinks of light. Towards the end though, the singing was too loud for the fairly small space, and this was an intermittent problem throughout the concert. Some choirs are too loud simply because they don’t have the skill to sing quietly, but this plainly wasn’t the case here, as there was also plenty of exquisite quiet singing throughout the evening. My other small complaint about the first half was that the audience were given the chance to clap after every piece, which rather disrupted the flow of this carefully constructed programme. 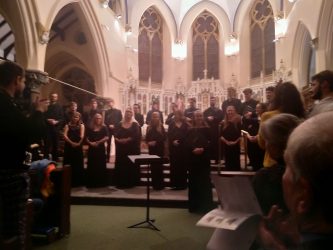 After Advent comes Christmas, beginning with mulled wine and mince pies in the interval, and then Britten’s A Boy Was Born in the second half. Britten was just 19 when he wrote this set of theme and variations, and it shows Britten already finding his distinctive voice and confidence, and his skill at making music from old English poetry. It would have been nice to have the texts in the programme, but even if not all the words were clear, DUCC did a good job of putting across the general meaning. I enjoyed the way that the tenors and basses swaggered through “Herod”, tossing their Noels through the parts like really good rugby passing. A semi-chorus of eight singers and another ethereal solo from Rosanna WIcks made a lovely prayerful moment of “Jesu as Thou art”. When the full choir returned for “the three Kings”, they transformed the gentle rocking motif that threads through the piece from a lullaby into excitement and urgency as the Kings hurry to Bethlehem. The sopranos and altos sent a blast of chilly air through the church with the stark dissonances of “In the bleak midwinter”, with the only warmth coming from the rich, rounded tone of Natalie Houlston’s solo. The piece ended with Christmas sparkle in “Noel!” with the lullaby now transformed into a joyous stomping dance, that gradually accumulated more and more energy.

This choir does not go easy on itself: to pull off such a captivating performance of A Boy Was Born after the demands of the first half is quite an achievement, particularly for a group in their first term of working together. I haven’t made it to a DUCC concert for a few years, so I don’t know how much continuity there is in membership since last year, but what struck me about this incarnation of DUCC is how tight they are as an ensemble; the balance between parts was excellent, and the semichorus sections and solos were spread widely across the group. I’ll definitely be making an effort to see them again this year.

For those who think that it’s not Christmas without Rutter, the concert ended with his Hymn to the Creator of Light. I didn’t know this piece, so I was sceptical about how you could possibly have Rutter after Britten, but this complex piece for double-choir is a notch above Rutter’s usual lighter fare, and made for a calming doxology: the hymn tune “Deck thyself my soul with gladness” that shone through in the closing bars made a lovely end to this concert.

A beautifully sung and well-chosen programme of 20th century and contemporary music for Advent and Christmas from DUCC.

PrevPreviousMessiahs in Durham
NextDurham Singers: Bach Christmas OratorioNext
Music in Durham brings you classical music listings, previews, reviews and news for Durham, with a bit of random blogging thrown in. The concert listing pages bring together classical music events from across the City and the University, so whether you’re looking for a great concert to go to, or if you’re planning something and want to avoid clashes, this is the place to look.
Menu
Twitter Facebook-f Envelope