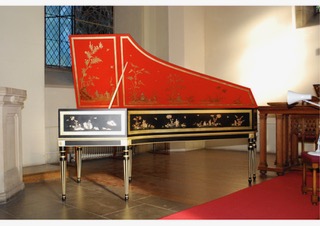 Musicon, Durham University’s professional concert series, always brings us an impressive line up of musicians, but every so often, a name appears on their schedule that really stands out, that makes me look again and think “really? here? In Durham?”. Such was my reaction when I saw that harpsichord superstar Mahan Esfahani was coming to perform a work that he’s made his name with – Bach’s Goldberg Variations. I was a bit disorganised about booking and was extremely surprised to find that there were still tickets left a week before the concert.

The beautiful instrument that Esfahani played this evening has an interesting history: it had been supplied as a kit from the American maker Hubbard to a Scottish organist and harpsichordist, Michael Chibbett. After his death, he left it to Greyfriars Kirk in Edinburgh, where it was neglected, and left to gather dust in unsuitable conditions, becoming virtually unplayable. It was eventually taken on by maker and restorer William Hendry, who has rebuilt it to into an instrument of great expressivity, with a rich pallet of colours which Esfahani exploited in full, helped by the dry acoustic of Elvet Methodist Church that kept all the details clear.

In the fastest movements, Esfahani played with a terrifying energy — Variations 1, 21 and 23 had an exciting, pounding beat; number 28 with its long trills and chromaticism felt visionary and daring; and the big chords that open the penultimate variation rang out with a surprising urgency. No-one pushes a piano to its physical limits when they play Bach, but the way Esfahani played, there was a real excitement that came from the way he made the harpsichord work so hard, across all the extremes of its tonal dynamic ranges. I’ve never really listened deeply to the Goldbergs on a harpsichord – for one reason and another, I’ve mostly heard it played by pianists;  Esfahani tonight gave me a new insight into the sheer audacity of what Bach does in this set.

There were also moments of extraordinary lyricism and sweetness, such as a gorgeous legato in Variation 4 (I think, I briefly lost count), and an emotional depth in Variation 15. Throughout, Esfahani added emotional power by pulling around tempi and ornaments, sometimes leaving dangerously long pauses before final notes, but whatever he did, the underlying beat rolled onwards, unbroken. All this prepared us for a devastatingly beautiful Variation 25: Esfahani played this long, dark movement with one of the two manuals on the lute stop, creating a strange, other-worldy conversation between the two voices.

In his programme notes, Esfahani set out his own imagined story to explain the Goldbergs, with the three x three sets of rising canons representing a journey to heaven. In Variation 30 where we would expect another canon, Bach gives us a “quodlibet”, or “what you will”, a joyful variation on two folk songs, and Esfahani suggests that we could see in this movement a vision of a heaven in which Bach is reunited with his many lost loved ones – parents, brothers, children and his first wife, and is happily singing around the kitchen table with them. It doesn’t really matter whether this story contains any grain of truth (and after all it’s no more fantastical than the story of the insomniac Count that usually comes with the Goldbergs) – what matters is that Esfahani used this to create a thoroughly plausible musical story, giving an emotional structure to what can be quite a demanding work to listen to.

I felt too that there were miniature dramas leading up to each of the really intense movements: as we approached Variation 15, Esfahani’s playing became darker, adding tinges of sadness to quite lively music, whilst just before Variation 25 the music became oddly serene, as if oblvious to a sudden tragedy that was about to occur. When we arrived at the Quodlibet, instead of its usual jaunty, rather rustic air, Esfahani made this movement the destination of the whole sequence. He began it hesitantly, putting a lone voice trying out to see whether anyone else will join in, but gradually it blossomed into a sweet homecoming. The return to the Aria after this was a dazed, sad awakening, the realisation that it was all a dream.

Esfahani ended the concert with his own riddle. Coming back on stage, he spoke to us and said that his teacher, Zuzana Růžičková, told him two important things. One: a musician should always know when they could have played something better. Two: if you don’t nail the first five variations of the Goldbergs, you’re in for a long night. Having told us that, Esfahani went said he was going to do something he’d never done before, and he returned to the harpsichord and played those first five variations again. Maybe it was a tribute to Růžičková, who died just two months ago, or maybe he felt he hadn’t nailed them the first time around. To my mind, the encore performance seemed much more relaxed, or maybe that’s just me making up stories to fit the music too.

Update: thank you to William Hendry for sending me this photo of the harpsichord that Esfahani used for this performance.

PrevPreviousChor Semiseria visit Durham
NextOpera dei Lumi’s enlightening MessiahNext
Music in Durham brings you classical music listings, previews, reviews and news for Durham, with a bit of random blogging thrown in. The concert listing pages bring together classical music events from across the City and the University, so whether you’re looking for a great concert to go to, or if you’re planning something and want to avoid clashes, this is the place to look.
Menu
Twitter Facebook-f Envelope