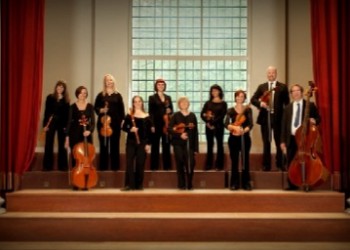 One musical sound that is absolutely guaranteed to send me into raptures is Bach’s trumpet writing, particularly in his choral music where he often uses trumpets to lift vocal lines that are already full of joy into another dimension. And it’s not just a few little fanfares; Bach punishes his trumpeters with athletic runs and long trills, high in the register, so that whenever I hear his trumpet passages played well, I get little extra jolt of happiness from the thought that the player has gone to so much effort and put in so many hours of practice in order to share this glorious music with us.

Tonight’s Durham BRASS concert at Durham Cathedral, given by the cathedral choir and the period musicians of St James’ Baroque, and directed by Daniel Cooke, was built loosely around Bach’s trumpet music in both choral and instrumental settings, with the full-bodied sound of a trio of trumpets enhancing the Magnificat (BWV243) and the shimmering virtuosic solo line of the second Brandenburg concerto. The concert began without trumpets though, with the Lutheran Mass in A, BWV 234, consisting of just a ‘Kyrie’ and ‘Gloria’. Daniel Cooke created a nice balance between dance and reverence, so that the music expressed a quiet, but confident faith that seemed to me to convey the essence of Lutheran worship. This came across particularly in the ethereal flute duets, played by Rachel Latham and Rachel Brown, and in the quietly singing contentment of Miki Takahashi’s beautiful violin solo accompanying the bass aria ‘Domine Deus’. The choir brought a good energetic sound to contrast with the solos and the final ‘Cum Sancto Spiritu’ chorus had a nice swing.

The cathedral choir trebles came across well in the opening movement of the Magnificat, particularly when the accompaniment lightened up, and the whole choir was a swirl of energy as they punched out their entries in ‘Omnes generationes’. The solos were spread through the choir, with the orchestra responding very sensitively to the younger singers, lightening up when they needed space. Liliana Banev’s crystal-clear high notes were a delight in her assured performance of the aria ‘Qui tollis peccata mundi’ in the Mass, and I very much enjoyed Beth Stenlake’s ‘Quia respexit’ in the Magnificat, accompanied by the gorgeous tones of Jane Downer’s oboe d’amore. I was most impressed this evening though by the cathedral choir’s new alto, Joy Sutcliffe, who sang both her solos with absolute commitment to the text, adding expressive colouring and shape to the musical line.

The highlight of the evening for me, however, was the second Brandenburg concerto, a piece that has consistently been one of my all-time favourites and the one I turn to automatically whenever I need cheering up. (It’s also special to me because in its solos, it combines the three instruments that I’ve played at various times: trumpet, oboe and recorder). Directing from the harpsichord, Daniel Cooke led a performance that was effervescent but forceful, like a spray of champagne released from a well-shaken bottle. Simon Munday’s natural trumpet was wonderfully clean and crisply articulated through the fast passages, with expressive shaping on his long notes in the first movement, whilst in the third movement his highest notes were like coiled springs that sent the music bouncing onwards. Even on carefully-balanced recordings, the recorder and oboe are hard to hear in the first movement, and in the wayward acoustics of the cathedral, they often disappeared, but Bach gives them their moment in the second movement when the trumpet drops out. I was completely transfixed and inspired here by Rachel Brown’s recorder playing, with her gentle bloom through long phrases adding to the sunny warmth of this movement; oboe soloist Gail Hennessy added some lovely ornamentation, and again, Miki Takahashi’s violin sang lyrically. This second movement is often upstaged by the glories of the outer movements, but tonight it really shone. Bach gives the quieter solo instruments more space in the final movement, and I really enjoyed Rachel Brown’s fluttery articulation and the little surges of energy from all the players: definitely a performance to make me smile.

PrevPreviousLife at Samling Academy
NextOpera dei Lumi: Handel’s EstherNext
Music in Durham brings you classical music listings, previews, reviews and news for Durham, with a bit of random blogging thrown in. The concert listing pages bring together classical music events from across the City and the University, so whether you’re looking for a great concert to go to, or if you’re planning something and want to avoid clashes, this is the place to look.
Menu
Twitter Facebook-f Envelope