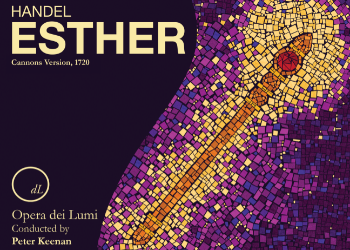 A rare opportunity to hear Handel's 1720 'Esther' in an extremely enjoyable performance given by Opera dei Lumi at Ushaw College.

Here’s a pub quiz question for you. Can you name any characters who feature in both a Handel opera and an oratorio? There may be others, but the one I’m thinking of is the Persian king Xerxes I: he’s known as Serse in the opera of the same name, but in the Bible, his name is Ahasuerus, and he appears in the Book of Esther, the subject of one of Handel’s earliest experiments in sacred oratorio. As with many of Handel’s works, Esther underwent a number of changes: the 1732 version is billed as being Handel’s first English Oratorio, and the advertising made a point of mentioning the use of music from Handel’s Coronation Anthems. This wasn’t the first Esther though, and it was to the earlier version of 1720 that Opera dei Lumi turned for last night’s performance in St Cuthbert’s Chapel at Ushaw College, under the direction of Peter Keenan.

This earlier Esther was written for Handel’s employer at the time, the Duke of Chandos. It’s more of a chamber opera or a masque than an oratorio, consisting mostly of recitative and da capo arias, with just a few short choruses punctuating the action, and with Opera dei Lumi’s tight-knit ensemble of eight singers and a small orchestra, it was easy to imagine this music being performed in the intimacy of the Duke’s residence at Cannons.

The plot is surprisingly simple for a baroque opera, but assumes some knowledge of the Biblical back-story. In a nutshell, Esther, a Jew, is married to Ahasuerus. His advisor, Haman, has decreed that the Jews must be destroyed, and the only way he can be stopped is for Esther to intervene – but to do this, she must risk her life by breaking the strict rule that no-one may approach Ahasuerus unasked. Needless to say, Ahasuerus is overcome with love, and does everything Esther asks.

Esther’s appeal to Ahasuerus forms the central moment of the drama, and was sung extremely affectingly by soprano Catrin Woodruff and tenor Chris Huggon. Here, Woodruff was delicately timid, conveying her anxiety through lovely quiet lines punctuated by the muted chords of the orchestra. She needn’t have worried though, for Huggon’s Ahasuerus responded with the air of a man utterly besotted, in a lovely, gently lilting ‘O beauteous Queen’. By Act Three, Esther has gained the upper-hand over Haman, and Woodruff shone in her big aria ‘Flatt’ring tongue’, with a bravura bit of ornamentation at the end of the middle section setting her up nicely with extra energy for a da capo that fizzed with rage and triumph.

Amidst a strong cast of supporting solos, Patrick Owston stood out in the role of Haman. His first aria, ‘Pluck root and branch’ was commanding in tone, and exciting to hear as he spat out his consonants. After Esther’s denouncement, Haman knows he is doomed and ‘How art thou fall’n from thy height!’ sent a chill down my spine, that came from the dark despair in the orchestra’s rising dotted motif, and from the tension in Owston’s long, well-sustained lines. I also immensely enjoyed soprano Angela Hicks in her one aria, ‘Praise the Lord with cheerful noise’ which she sang off-copy in a bright, agile tone, full of commitment and communication, and with very nice definition in her ornaments.

Opera dei Lumi’s orchestra used modern winds, but with natural horns and trumpet making an appearance in Act Three. For what is essentially a chamber piece, Handel uses lots of orchestral colour, with oboe and bassoon dominating throughout. He also uses a harp for the aria ‘Praise the lord’, but for the preceeding aria, ‘Tune your harps to cheerful strains’ he uses pizzicato violins, as if he’s inviting us to admire his skill at imitating the actual harp. Opera dei Lumi’s orchestra picked up nicely on the sentiments of each aria, but the acoustic in St Cuthbert’s chapel did mean that there was inevitably some loss of definition in the fuller passages.

On the whole, Esther is perhaps one for the dedicated Handel fans: there is little of the rich character development that we see in the operas and there are no obviously noteworthy tunes or excitingly virtuosic fireworks, but Opera dei Lumi drew enough out of Esther to make it a very enjoyable evening’s entertainment, and the boisterous chaos of the extended final chorus, embellished with a manic trumpet solo (played by Michael Iles) gave a good flavour of what Handel would eventually achieve in his choral writing, and it had me grinning my head off by the end.

A rare opportunity to hear Handel's 1720 'Esther' in an extremely enjoyable performance given by Opera dei Lumi at Ushaw College.

PrevPreviousHappy Bach at Durham Cathedral
NextPrince Bishop’s Brass at UshawNext
Music in Durham brings you classical music listings, previews, reviews and news for Durham, with a bit of random blogging thrown in. The concert listing pages bring together classical music events from across the City and the University, so whether you’re looking for a great concert to go to, or if you’re planning something and want to avoid clashes, this is the place to look.
Menu
Twitter Facebook-f Envelope