Northern Consort begin with a farewell 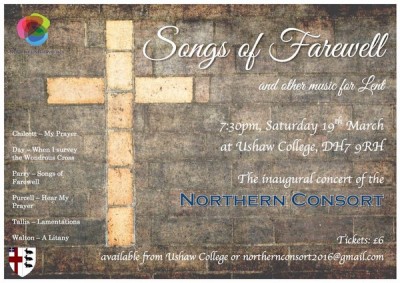 The eight singers of Northern Consort make an accomplished debut singing Lenten music by Tallis and Parry at Ushaw College, adding a welcome new voice at the small end of the Durham choral world. 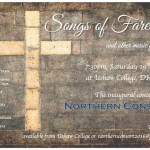 Although the world of singing in Durham is wonderfully varied and lively, there is definitely room for more at the smallest end of the choral taxonomy, so I was very interested to hear the debut concert at Ushaw College last night of a new group, Northern Consort, founded and directed by Simon Lee, and made up of eight singers drawn from Durham Cathedral’s choir and Consort of Singers.

Although Lent is supposed to be a time of penitence and abstinence, it’s also a time for absolutely heavenly music, and in this inaugural concert on the eve of Holy Week, Northern Consort wheeled out some of the best, building their programme around Tallis’s Lamentations of Jeremiah and Parry’s Songs of Farewell. They started off with Walton’s little jewel, A Litany (Drop, drop, slow tears) – apparently written when he was just fourteen. Basses Robin Crinson and Matthew Asquith gave the quietly focussed opening real depth, and after the powerful climax on ‘To cry for vengeance’ the piece wound down to a beautifully plaintive ending.

Purcell’s Hear my prayer is another tiny gem, an unfinished fragment of tormented pleading that’s so fraught with pain that you can’t imagine how anyone could bear the intensity of it for longer than its few short minutes. Northern Consort sang it twice though, either side of a reduced version of My Prayer, a piece by Bob Chilcott based on what Purcell left us. Chilcott threads Purcell’s lines through a gentle rocking accompaniment, ending in muttered supplications that worked well in Ushaw’s acoustic, but personally, I preferred the sparseness of the original, especially when sung here with just one-per part and excellent tuning, so that the dissonances really stood out. Following the Purcell, Edgar Day’s When I survey the wondrous cross, could have been a rather big spoonful of sugar after Purcell’s bitter medicine, but the Northern Consort’s tight, clear cathedral sound kept it from being excessively slushy and amidst all the Lenten gloom, they created a lovely warm glow for Isaac Watt’s final verse – ‘were the whole realm of nature mine’.

The five male voices spun Tallis’s Lamentations into a satin ribbon of sound, that flowed smoothly and gracefully. But although there were times when the ache and anger in the words, such as virgines ejus squalidae really came out, on the whole, I felt that these harsh, challenging texts had been sacrificed for the unbroken beautiful texture of the overall sound.

There was certainly no lack of expression in Parry’s Songs of Farewell and this miniature choral symphony produced the best music of the evening. It’s easy to think of Parry as being all ‘Jerusalem’ and ‘I was Glad’ because these are the works that get the prominent public performances, but these six haunting pieces are a world away from all that Edwardian bombast (although I thought I heard just a glancing reference to the big Parry choral sound at the end of second ‘song’, making for a poignant reflection on human pride). Parry wrote the Songs of Farewell as he was slowly dying, and the beauty of his music is matched by the dazzling language of the poems he sets, mostly from the sixteenth century.

Northern Consort drew us thoughtfully through Parry’s varied meditations on his imminent death; the yearning for peace and the end of torment in My Soul there is country and Never weather-beaten sail; the frailty of human endeavours in a humbling account of I know my soul hath power to know all things; the grand vision of heaven in At the round earth’s imagined corners and finally the sense of acceptance in Lord let me know mine end. The penultimate movement, At the round earth, setting words by John Donne is one of my favourite pieces of choral music and I really enjoyed what Simon Lee did with it – particularly the punchiness of the middle section ‘All whom the floods did’ and the contrast this then created with the floating lines that followed. Lord let me know mine end seemed to draw together everything that had gone before – not just in the Parry, but for the whole concert; echoing as it did the sadness of the Lamentations and the pleading of Lord let me know thine end making for an extremely moving end to this accomplished debut. I look forward to their next concert.

The eight singers of Northern Consort make an accomplished debut singing Lenten music by Tallis and Parry at Ushaw College, adding a welcome new voice at the small end of the Durham choral world.

PrevPreviousWhat happens at a Samling Masterclass?
NextThe gods diminished – ETO Iphégenie en TaurideNext
Music in Durham brings you classical music listings, previews, reviews and news for Durham, with a bit of random blogging thrown in. The concert listing pages bring together classical music events from across the City and the University, so whether you’re looking for a great concert to go to, or if you’re planning something and want to avoid clashes, this is the place to look.
Menu
Twitter Facebook-f Envelope